On Monday, Nancy Pelosi (finally) re-invited President Trump to come to the House of Representatives to give the State of the Union Speech- SOTU- on February 5, according to the Washington Examiner. It only took over a month, a lot of back and forth between her and the President, a few snitty moments, and a plastic smile. The final agreement was seemingly cordial and polite.

Protocol says that the Speaker of the House must invite the President to deliver the State of the Union speech. Originally it was scheduled for January 29, but Nancy Pelosi scrubbed that date and told the President she didn’t want him delivering it during the shutdown (due to security reasons she claimed). The DHS didn’t take kindly to her statement about security.

“The Department of Homeland Security and the US Secret Service are fully prepared to support and secure the State of the Union. We thank the Service for their mission focus and dedication and for all they do each day to secure our homeland.” Kirstjen Nielsen, DHS Secretary

The Department of Homeland Security and the US Secret Service are fully prepared to support and secure the State of the Union. We thank the Service for their mission focus and dedication and for all they do each day to secure our homeland.

Pelosi’s first letter to the President was snitty, telling him he either agrees to a date or he could hand-deliver his SOTU on paper. The letter said that they “will not consider a concurrent resolution authorizing the President’s State of the Union address in the House Chamber until government has opened.”

He then blocked her from a trip overseas by pulling her government transportation out from under her, and suggesting she could fly commercial. Then he banned all government departments from travel during the shutdown. Both sides have been accused of being “petty.”

As the tension escalated and Trump threatened to find another venue, he finally acquiesced to her and said it was “her prerogative” and he would not give the speech until after the shutdown. On Monday, Pelosi sent him the invitation, to which the President readily agreed, and even thanked her. 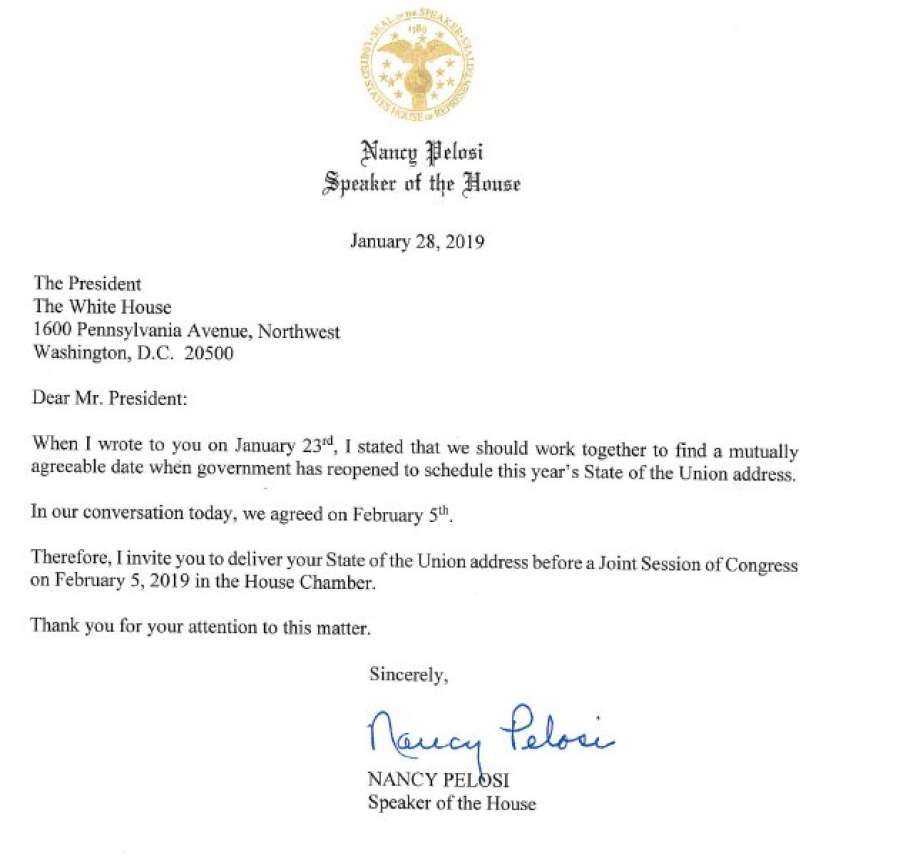 The State of the Union speech is mandated under Article II Section 3 of the US Constitution, but must be agreed upon by both House and Senate. It is steeped in tradition and protocol. This will be Trump’s first SOTU in front of a Democratically controlled House, so the petulance and disrespect may be apparent. It will likely be one of the most difficult speeches he will ever have to give.

HILARIOUS: Even DEMS Are Sick Of The ‘Love Gov’ … Ready To Mutiny
Clash Daily