Portland, Oregon – It’s actually common for burglars to defecate or urinate in a house they’ve burglarized. It’s even fairly common to find a burglar curled up in a bedroom sort of like Goldilocks and the three bears. But in Portland, Oregon, a man got naked and crawled in bed with a couple that was sleeping, and kissed the man. This is not a Sleeping Beauty story.

Get the gun! Naked Burglar!

Richard Dean Defeudis, 32,  is accused of entering the home in the 2700 block of Northwest Quimby at about 3:40 a.m., stealing numerous items. Then he reportedly stripped naked, went into the bedroom and climbed in bed with the residents.

As he slid between the couple, he leaned over and planted a smooch on the male. When the homeowner awakened, he found Defeudis sitting on top of him with a knife.

There is a reason we have guns in the house and this is a prime example.

The home’s resident woke to find the stranger holding a knife and sitting on top of him. Police said the man pushed off the intruder and grabbed a handgun, telling the man to stop.

The intruder pulled on his pants, running out of the home as the man chased him with the gun. The resident fired three shots near the suspect, but no one was harmed. Neighbor Kevin Gillam said an officer told him the bullets went into the ground.

The burglar continued to run, police said, eventually breaking into a second house — this one vacant. Defeudis was arrested at this second home in the 2700 block of Northwest Pettygrove Street.

Neighbors seemed rattled by the unusual offense, and one said he might just move to a high-rise condo. 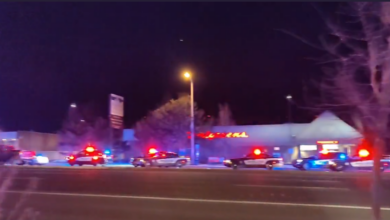