(Natural News) The Biden regime’s politicized ‘Justice’ Department has obviously been given a mandate by the deep state running the current administration: Go after Trump supporters with a vengeance, even if it means lying, cheating, hiding evidence, and creating a wave of false narratives regarding the Jan. 6 ‘riot’ that was actually a provable false flag event.

According to The Epoch Times, at the DOJ’s request, a federal court is keeping under wraps an FBI affidavit that completely undermines the regime’s seditious conspiracy case against the patriot group Oath Keepers, which shows that members “are not guilty” and “proves that the prosecution is lying to the jury,” said an attorney for members of the group last week.

Jonathon Moseley, who previously represented Oath Keepers defendant Kelly Meggs before he had his license to practice law revoked, told the outlet that an FBI interview with a Capitol Police officer proves that in actuality, the Oath Keepers protected the officer from angry rioters near the Capitol Building Rotunda on Jan. 6, 2021.

“This document—together with a photograph of the moment inside the U.S. Capitol on January 6—proves that the prosecution is lying to the jury,” Moseley said in the statement. “No one who engages in seditious conspiracy or insurrection stops to come to the aid of the police against the mob.

“If the Oath Keepers were involved in any way in any insurrection or conspiracy to obstruct the Joint Session of Congress on January 6, would they turn and stand between the U.S. Capitol Police against the mob?” Moseley noted. “This is not merely a good act. This is absolute proof that there never was any insurrection or seditious conspiracy. The prosecution’s entire case is a fraud upon the American people.”

Prosecutor Jeffrey Nestler informed Judge Amit Mehta that Moseley was “threatening” to release a sealed document. In response, Mehta took the unusual step of telling the news media covering the trial to post messages on social media to Moseley saying that he would be jailed if he released the document.

Judge Mehta says that if Mosely does he will be in contempt of court and he urges us (reporters) to tweet that out so Moseley will know that. Moseley claims the doc lost its protective order status; Mehta: i decide when something's lost that status. /59

“These public tweets from journalists reporting on Mehta’s public warning are visible as an incredible event in the already farcical prosecution,” Moseley said.

The two FBI agents who interviewed the Officer Dunn on May 18, 2021, asked about the incident in the rotunda. According to video footage taken by an independent journalist, as well as portions of Dunn’s interview with the agents that The Epoch Times obtained, “a group of Oath Keepers came upon a volatile standoff in the Small House Rotunda at 2:48 p.m. on Jan. 6,” the outlet reported. Dunn and at least two other agitated protesters were shouting at each other, the report added.

It’s patently clear that this was not “seditious conspiracy,” but rather a concerted effort by the deep state to jam up then-President Donald Trump and demonize his supporters as ‘domestic terrorists,’ as noted by a trained observer who was at the Capitol Building that day.

J. Michael Waller, who was at the Capitol that day, wrote about what he saw in a piece for The Federalist a week after the breach: 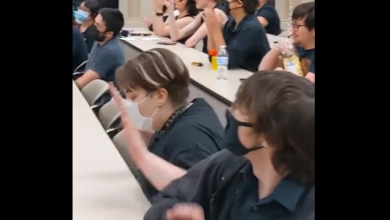