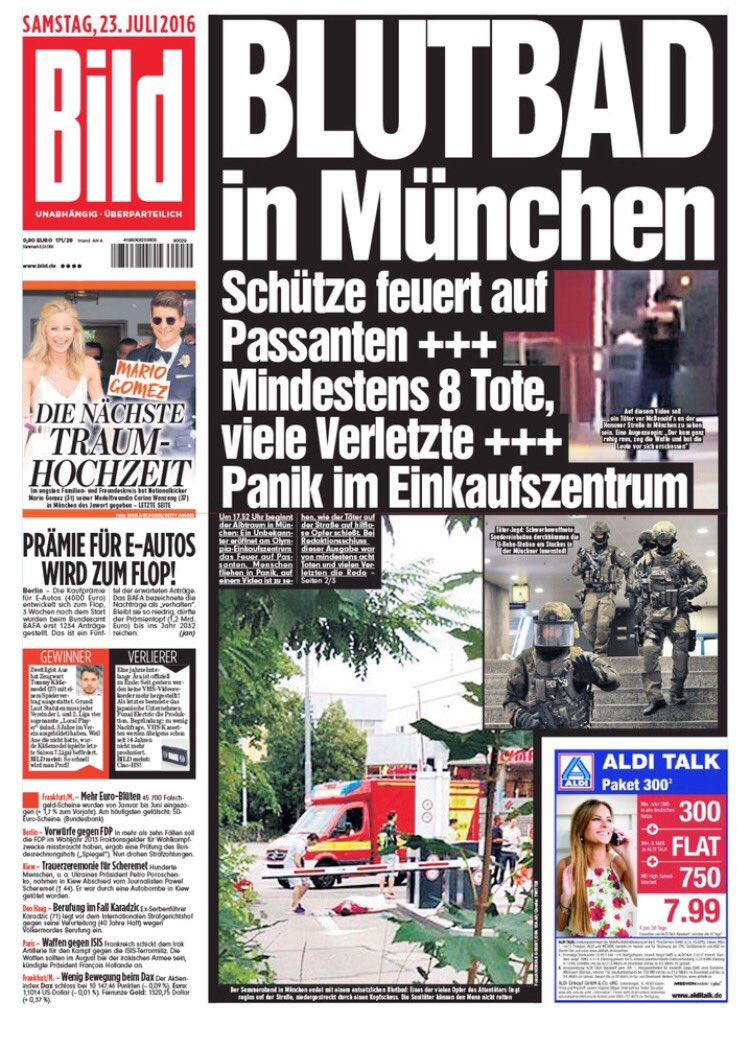 HOT on the heels of this investigative journalist’s latest commentary, ISIS, (“Pure” Islamists) Lays It All Bare: Watch Out Europe & America, Jihad Has Just Begun! Lessons Learned, almost to an orchestrated cue, along comes another militant Islamic jihadi attack. What a shocker! NOT.

STILL yet, before we segue to the latest carnage, knock-on effects, enveloping another western city (as this site pointed out ad infinitum), the jihadi’s origin of birth or Islamic sect (Sunni or Shia) has ZERO bearing when it comes to slaughtering infidels. No diff. But what DOES matter is the absolute impetus for their jihad: Islam. Everything else pales in comparison to their fevered bloodletting, and this is the uncomfortable and paralyzing truth. You got that?

MOREOVER, per this site’s excerpted report on July 21, 2016, in relationship to the axe slaughter on a train in southern Germany, the following is more than mandatory truth-telling:

AND this brings us to the most intrinsic lesson(s) learned, in respect to militant Islamic jihad and its swathe across the west.

INTRINSICALLY, one needn’t be a card-carrying member of ISIS to become a time bomb within the west, be it in America, Europe or elsewhere. Far from it. In reality, one “only” has to adhere to the core tenets of Islam, that which veer off the well-worn propagated path adhered to by Islam’s western apologists. Enablers.

CONSEQUENTIALLY, westerners must learn to separate their horrific reactions from this and that jihadi attack, instead, to keep their eyes and ears peeled on Islam itself!! It is this political (wrapped under religious veneer) ideology which will be the death of the west – if not stopped in its deadly tracks! It must become: The People VS Muhammad!

NO sense in jive-talking otherwise.

MAKING matters exponentially graver for the west, the leader of the heretofore free world is a clinical narcissist, sociopath, Marxist and Islamist. And that’s putting it mildly. He is Islam’s (very best, and most powerful) American friend. There is no sense in arguing otherwise. Mind you, his light-hearted banter, in the midst of mentioning the jihadi attack at the mall, attests to his sociopath tendencies, as well as his figurative thumbs-up to his fellow Muslim terrorists. No doubt. A double (western) whammy and a major F U too.

(Merkel pictured under a FDJ banner – Free German Youth, also known in German as Freie Deutsche Jugend – she was one of the leaders of its agitation and propaganda arm for communist and socialist fronts…hmm)

NOT only that, Germany, the EU’s leading nation, has a non-reformed Stasi agent at its helm ala Frau Merkel. Incontrovertibly, she is hell-bent on transforming Germany into an Arabian satellite. The reasons are manifold, and can be found throughout this site. Seek and you shall find.

EVEN so, with the above duly noted and reconstructed, isn’t it par for the course for Allah’s Muslim Terrorists to turn on, to burn, their western hosts? What about biting the hand that houses, feeds, and otherwise provides for their largess? Imagine that. Adding insult to grave injury, it is these same immoral leaders who spit in the faces (and on their graves) of every non-Muslim citizen of their respective countries, leaving them at the “mercy” of the most retrograde forces known to man!

For seven hours the authorities of the leading European power were paralyzed over how to handle the massacre of nine Germans at he Olympia shopping mall of Munich by an 18-year old Iranian German Friday night, July 22 without uttering the words “Islamic” or “jihadist” – or even “terror.” The gunman, who killed himself far from the crime scene, gained German citizenship after arriving from Iran two years ago. He too has not been named. At stake was Chancellor Angela Merkel’s open-arms policy for Middle East refugees. And so a city of 1.5 million was sent into panic by muddled, stammering statements, which for hours refrained from defining the mall attack, locked the entries against the media and refused to specify the number of casualties.. French President Francois Hollande bluntly said it for them. It was a terrorist attack, he said Saturday morning, July 23.
Young people and “adolescents” are among the 9 dead, and children are among the 16 injured. Hundreds of police Saturday searched an apartment believed to have been the shooter’s home.

This was how the episode unfolded, according to DEBKAfile’s initial report Friday night:
With still no official figure on casualties in the shooting spree Friday night, July 22, in the Olympia mall, Munich’s largest shopping center. However medical staff are being rushed to the city from across the state of Bavaria, indicating a casualty emergency of major proportions and multiple deaths.
Munich police now believe that three gunmen were involved and are on the run, but refrain from defining them as jihadist terrorists.
Large numbers of people fled the shopping center at the heart of Germany’s third city, while shopkeepers hid in barricaded stores and eateries.
Following the Olympia mall shooting, sirens were activated in a number of Munich districts warning people that their city was under terror attack which has all the hallmarks of a jihadist atrocity against a soft target.
The public was urged to stay off the streets and away from crowd centers. All Munich transport systems were closed down amid reports of a second shooting at the nearby Marienplatz Metro station at the heart of the capital of Bavaria. The central railway station was evacuated and closed down.
DEBKAfile’s counterterrorism sources report that the gunmen were armed with pistols as well as automatic rifles which were planned to maximize casualties.
It’s the second attack in Germany in less than a week. On Monday, a 17-year-old Afghan wounded five people in an ax-and-knife attack on a regional train in Bavaria. The attacker claimed by ISIS as its “fighter” was shot and killed by police.
The mall is next door to the Munich Olympic stadium, where the Palestinian terrorist group Black September took 11 Israeli athletes hostage and eventually killed them during the 1972 Olympic Games.

AS to the aforementioned proximity to the 1972 Olympic Games and its jihadi aftermath, know that history repeats. It always does, that is, for those who refuse to learn its lessons. In other words, what starts with the Jews NEVER ends with the Jews. Basically, any westerner who thought that they were safe from militant Islamic jihad – you would be wrong!!

AND truth dare be told, if HUSSEIN’s or Angela’s (including, the rest of the west’s leaders who expose their citizens, akin to ducks in a shooting gallery, to Islam’s barbarians) nearest and dearest became part of the body count, that would not only be kismet but too damn bad. Comeuppance. As it stands, they feel completely insulated from any blow back that they facilitated. Accomplice-like. Immoral cretins, the likes of which deserve to burn in hell too.

MOST significantly, readers may recall two intersecting dots connected within. If not, no matter. Let’s just refresh to reconnect and realign them. They are that intrinsic to saving the west from the death grip of Allah’s Muslim Terrorists. 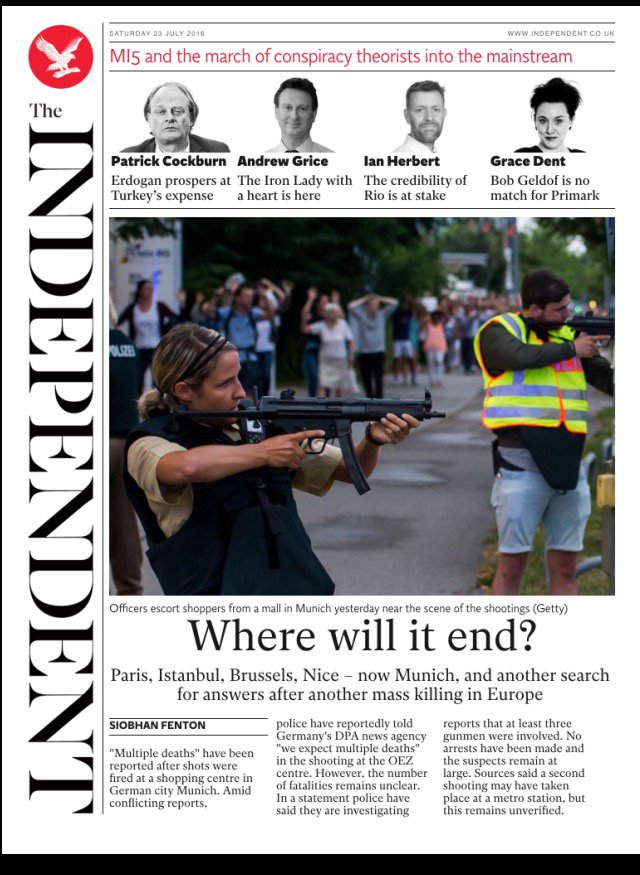