This is one of those things that really makes one scratch the old noggin… On Monday, Brianna Wu, a Democrat candidate for Congress from Massachusetts, warned of the dangers of humans going back to the moon.  Specifically, military humans, which are, after all, evil warmongers.  The reason?  Because, in her view, warmongers could mine very large rocks from the moon and hurl them at earth.

1/ This is being covered as a fun hijink for rich people, but the idea of a private corporation having access to moon should give you pause. https://t.co/6nOlNp8bEl

Wait, what happened to part two?  Well, it turns out she deleted it, but not before it was captured for posterity. 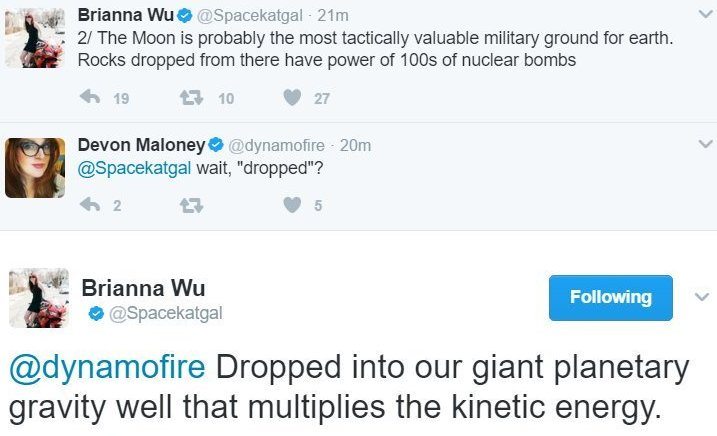 It sounds like she’s spent too much time watching television…

Yes, as we saw when the bugs destroyed Buenos Aires. #NeverForget pic.twitter.com/jStV6DsWBJ

I hope she wins. Congress is way too boring.

It seems she got into an argument with an astronomer and told him to “do the math.”

To which he responded:

Yes, but have to get them out of the Moon's gravity well first. Much better to get rocks already passing close and divert

Wonder if she meant Common Core math, where 1+1 can equal whatever gender you feel like being that day?

For the sake of fairness, let’s play along with Wu’s theory for a hot second. Let’s say that the moon, which is an estimated 238,900 miles away from earth, could potentially become a tactical base from which asteroids or missiles could be launched towards our planet.

But if someone did intend to destroy our home planet from space, they wouldn’t need to send people to the moon to mine large rocks and build a really big slingshot aimed towards earth. It would be significantly cheaper and easier for someone to launch an orbital weapon into space that could rain missiles down on our planet at a closer range. Lucky for us earthlings, this kind of space weaponry has been banned for decades, thanks to a series of treaties dating back to the Cold War. Long story short, Wu’s concerns are very far-fetched and practically improbable, if not entirely impossible.

Kinda reminds one of this guy, who warned of Guam capsizing back in 2010…

Medical Doctors: “You Are Being Played” – “The SARS-C0v2 Virus Does Not Exist”
February 24th, 2021 DC Dirty Laundry