You can tell that the media sees Marjorie Taylor Greene’s plain-speaking as a threat to their narratives by the energy they throw into the lies they tell about her. The latest one is a doozy.

The incident began with a video MTG ran comparing the desolation caused by feral hogs and the desolation left in the wake of the current administration’s catastrophic agenda.

The comparison was only part of what set the left off. It was what came next that REALLY got them going.

The video was straightforward enough that even a child could understand the meaning.

Here’s the full text of the video that had the left freaking out:

We’ve got skyrocketing inflation, high diesel fuel, and Democrats’ America Last policies.
Democrats aren’t the only ones destroying farmers’ ability to put food on the table. We’ve got wild hogs destroying farmers’ fields. So we decided to go hog hunting.
[shifts to footage of MTG personally dropping a feral hog from the helicopter & footage of her posing with the kill] Let’s help American farmers out. Sign up below and let’s go in that helicopter and go hog hunting.
Enter to win now.

Oh, and there was an epic electric guitar riff playing in the background of the video — because of course there was.

What’s REALLY going on in this video

The Biden economy is having massive destructive impact, especially on farmers and their ability to provide the food so many of us take for granted … until the moment it’s no longer available.

She names some issues plaguing farmers — inflation, diesel prices, bad policy that disadvantages Americans — and pivots to another problem that many urban costal elites have probably never even heard of — feral hogs tearing up farmers’ fields.

She is painting a very particular vision of herself in this video. She is someone who (a) is aware of the problem farmers are facing, both in terms of policy and local conditions and (b) someone who cares enough about those problems that she will take action to solve them.

She also understands her audience, and what sets them apart.

Her audience is right-wing with a deep respect and appreciation for the connection beween land and food. Food isn’t what comes from the supermarket, it’s what comes home from the farm — or maybe the forest.

Shooting feral hogs doesn’t just solve a problem for farmers, it’s enjoyable, too. Most likely, the fresh, wholesome meat harvested from this kill will find it’s way into a charity benefiting hungry people in need.

People will enter a contest to shoot hogs with her, and in the process, she will be building an email list of people who might be interested not just in a chance to fly with her, but to hear about her other policy ideas, perhaps even supporting her in future election runs.

What the LEFT things is going on in this video

Huffpo doesn’t see the connection we described above… mostly because they are leftist hacks who choose to see the worst in people on the right.

What THEY see is a thinly-veiled reference to slaughtering — Democrats.

Never mind the string of violence we’ve been seeing initiated by leftists against MAGA voters — spurred on by the Divider-in-Chief’s own incendiary rhetoric.

Dozens of churches, crisis pregnancy clinics and other pro-life organizations have been firebombed, vandalized, and faced other political threates.

A 18yo boy was the victim of vehicular homicide because a drunken man in his 40s ran him down claiming the victim was a ‘Republican extremist’.

A man was arrested with tools and a plan to assassinate a Republican-appointed SCOTUS judge over the Dobbs decision after his private address was published by leftwing activists and AG Garland took no steps to arrest the felonious ‘protesting’ outside of the Justices’ private residences.

Then there was the attack on volunteers in Abbott’s campaign…

Texas Gov. Greg Abbott’s reelection campaign said two of its volunteers were assaulted by a man near Houston on Saturday while door-knocking.
The man allegedly chased the volunteers, attempted to “drag them out of their car,” and damaged the sideview mirrors on their car, per the campaign.
“Political violence is never acceptable. With just over a month until Election Day, the passion to win should never bubble over into something more dangerous,” Mark Miner, communications director for the Abbott campaign, said in a statement. “There is no place for this in Texas.” — WashingtonExaminer

If Huffpo really wanted to write a story about political killings, they might want to revisit the Bernie bro would-be assassin who took a gun to Republican baseball practice, had himself a kill list, and almost succeeded in murdering Scalise in cold blood.

If that was too long ago, they could go as recently as *checks notes* last weekend:

What kind of a dangerous jackass shoots an 84yo woman in the back? A Democrat, most likely.

But none of those stories fit the narrative they were trying to push about Republican extremists. So Huffpo wrote this bad faith article instead: 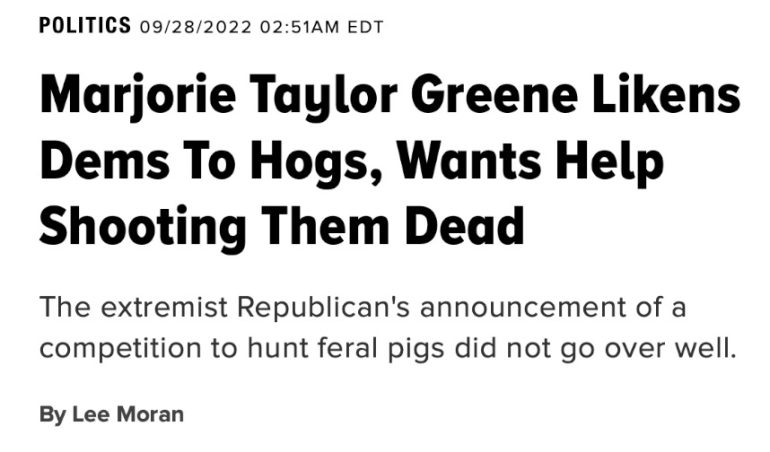 If pressed into unwilling honestly, they could use the dodge that *technically* the ‘them’ in this headline doesn’t refer to ‘Democrats’… it only means hogs. But clearly that is NOT how the casual reader would see this headline.

From the text of the article:

Far-right Rep. Marjorie Taylor Greene (R-Ga.) on Tuesday launched a competition to join her hunting for feral hogs in Texas. In a video shared on Facebook, the extremist lawmaker likened Democrats to the wild animals that tear up farmers’ crops.
“We’ve got skyrocketing inflation, high diesel fuel and Democrats’ America-last policies,” said Greene, who has been stripped of her House committee assignments over her use of violent rhetoric, including toward Democrats.

Greene ripped them a new one with a series of tweets. 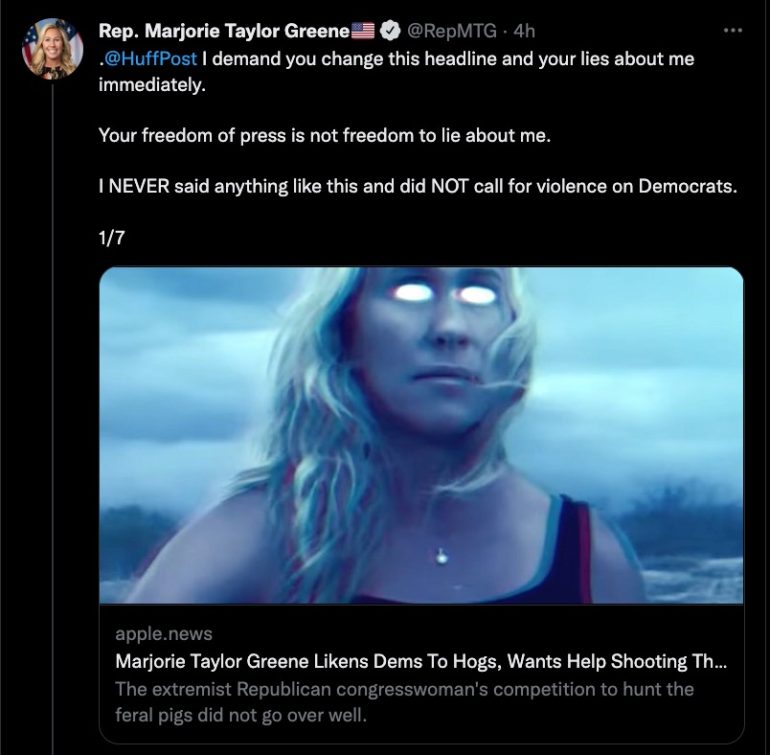 Threadreader compressed the rest of it for easier reading: 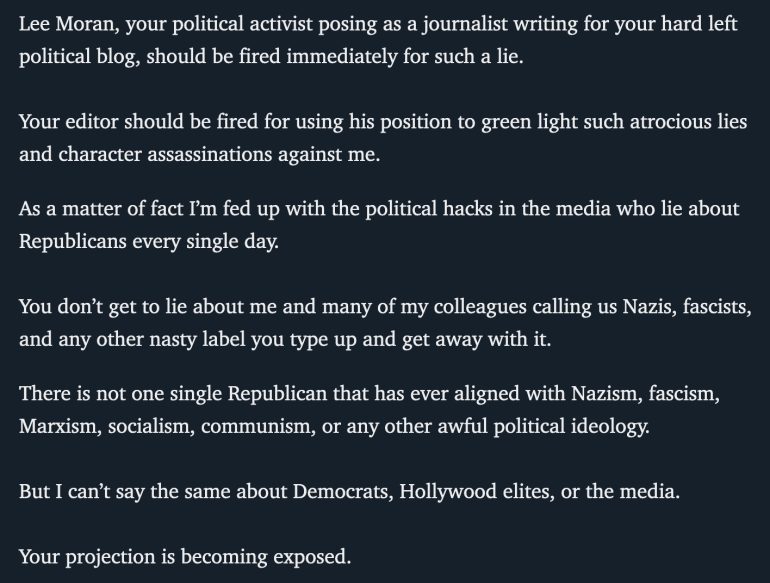 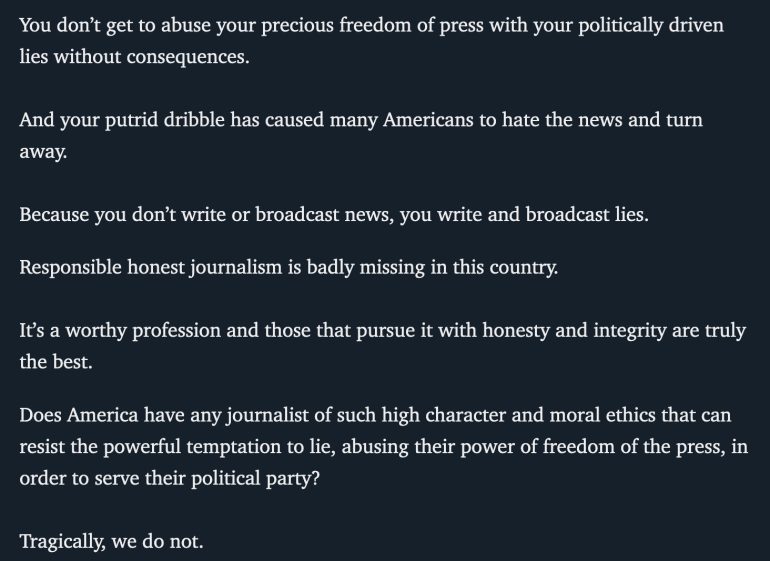 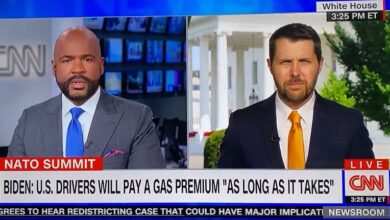 What The Hell Did This Biden Advisor Mean By ‘The Future Of The Liberal World Order’? (Video) 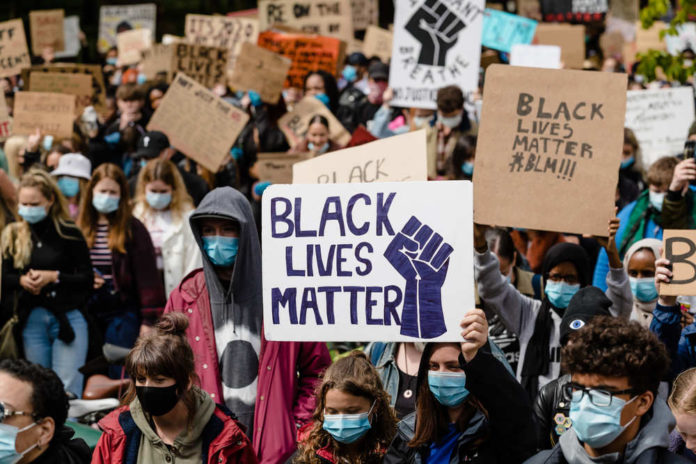 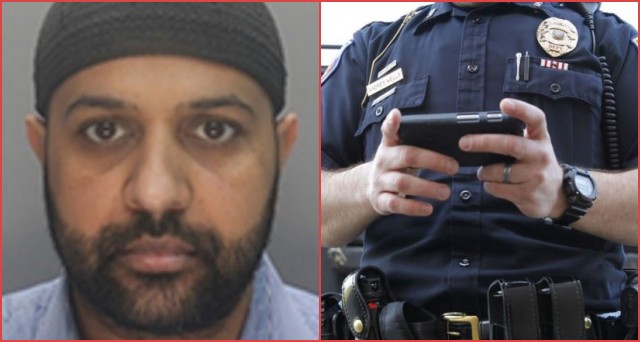