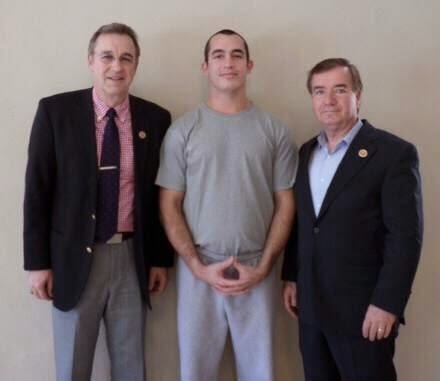 This serviceman “needs to come home.”
– Congressmen Ed Royce (R-Calif.) and Matt Salmon (R-Ariz) who visited with Sgt. Andrew Tahmooresi this past weekend

One day after Meriam Yahia Ibrahim Ishag was released on orders of the Sudanese appeals court, the breaks have been put on her leaving the country for a new life here in America, but what I want to know is why this woman did NOT leave Sudan immediately upon her release, and more than that why didn’t she leave immediately after her marriage to Daniel her American citizen husband…a naturalized American who returned to Sudan to marry Meriam in a Christian service…why did he leave her behind when he returned to America. She could have come here on a tourist visa after her marriage and applied for a green card yet she did NOT.

And when you really think this through you’ll realize there’s more to this story than one woman refusing to denounce her Christian faith…you know it as well as I do.

And yet for this one woman the world is in an uproar…America is in an uproar…all while one of our own…I repeat one of own and a Christian to boot NOT that his faith should matter…languishes in a Mexican jail for making a wrong turn.

Since March 31st, Sgt. Andrew Tahmooressi…a veteran who served two tours of duty in Afghanistan and suffers from PTSD…has been in custody of Mexican authorities all because he accidentally drove across the U.S./Mexico border with three LEGALLY purchased firearms and 400 rounds of LEGALLY purchased ammunition.

Claiming to have suffered physical abuse at the hands of his jail guards…physical abuse that includes having guards strip him naked and tying him to a bed, as well as tightening his cuffs until his ankles bled after an escape attempt. Yet, his plight seems to have disappeared from the media radar as all eyes are focusing on a woman who is NOT one of our own.

And last Thursday when Obama and his Mexican counterpart, President Enrique Peña Nieto, spoke on the phone about the crisis along the U.S./Mexico border… spoke at length in an attempt to try and map out a so-called ‘regional strategy’ to address the surge of unaccompanied children coming from Central America through Mexico…as always this most inept and traitorous of presidents accomplished NOTHING for they still keep coming and coming in droves.

And really what did he expect Nieto to do as these who the left calls ‘immigrants’… who I call ‘criminals’…are drawn to our country by this administration’s policies… specifically by Obama’s policy of ‘deferred action’ on deporting children. And Obama saying to Nieto that those…including children…crossing into the U.S. illegally will NOT qualify for legalized status or deferred deportation are just more of his empty words as bleeding heart liberals are all over the TV demanding that we must take care of all children coming here…LEGALLY or NOT…all while these ‘criminal’ children are being shipped off to Arizona and California to become their problems NOT his.

Oh and by the way, in his conversation with Nieto, Obama did NOT…I repeat NOT… bring up our Marine at all making it obvious to me that this administration…that this president…is more than happy to let Tahmooressi rot in jail forever for this omission was NO accident on his part, but a deliberate calculated move to send the message that he just does NOT care.

But he does care about a Sudanese woman half a world away.

And the response to these newest developments in the Tahmooressi case… including that he now has his third lawyer to date because the first two accomplished NOTHING to help get him free…can best be summed-up by Sarah Palin who echoed the thoughts of many of we patriots and she said it quite well, “We must implore our commander-in-chief to help America’s Marine under his command, and help his family with at least having their questions answered.”

Adding that “perhaps if Sgt. Tahmooressi had deserted his post, his mother would get the red carpet treatment at the White House instead of being ignored,” I’ll go one step further than Sarah and say that if Tahmooressi had his butt in the air facing East he would be home by now. Or if Tahmooressi had been a different color Michelle would be holding up a hash tag sign to bring him home.

So as the man who claims we leave NO American behind motorcades off to yet another golf outing…this time at Ft. Belvoir in Virginia…Sgt. Andrew Thahmooressi has most assuredly been left behind languishing in a Mexican jail as our country’s leaders turn their back on him but hey, Meriam Ibrahim’s plight is once again all over the news and these same leaders have NO problem speaking up in her defense…speaking up that she be set free.

Something is so wrong with this scenario…so very wrong indeed.

As we continue to work towards forcing this regime to answer to ‘We the People’ for high crimes and misdemeanors, we ask that you SIGN AND SHARE OUR PETITION BY CLICKING HERE… https://www.change.org/petitions/sen-ted-cruz-impeach-and-arrest-barack-hussein-obama-on-the-grounds-of-aiding-and-abetting-the-enemy-as-per-18-u-s-code-2339a All we need is 100,000 signatures to force this regime to address our concerns!!!