A former employee of Miami-Dade County in Florida, fired for his Christian speech and beliefs, now is taking the government operation to court.

Officials with Pacific Justice Institute said the complaint was filed on John Labriola’s behalf “to protect his and others’ constitutional rights to free speech, the free exercise of religion, and free press.”

The statement continued, “The county’s actions jeopardize the core constitutional rights of every county employee by threatening them with termination for simply exercising those rights. The county’s actions also undermine religious tolerance and ignore the fact that tolerance is a two-way street. Mr. Labriola did not forfeit the fundamental First Amendment rights that he holds as a private citizen by virtue of accepting public employment. Thankfully, our Constitution protects the freedom to express even those thoughts that others hate.”

The case is in U.S. District Court for the southern District of Florida.

The legal team explained what had happened:

John Labriola, who served as a media aide for the Board of County Commissioners of Miami-Dade County from 2013 to 2021, was suspended without pay for three days and ordered to attend a punitive extra “diversity” training program after he wrote an online opinion piece disagreeing with left-wing sexual and gender ideologies, and the so-called “Equality Act.”

Labriola then refused to undergo the punitive extra training program on the belief that it would have required him to apologize for his beliefs and to refer to people who identify as transgender by their “preferred pronouns”, which do not correspond to their biological sex – speech to which Labriola has religious objections.

For invoking his free exercise right and his right as a public employee to resist that compelled speech, Labriola was fired. After the firing, the County’s HR department admitted that it “did not find any evidence to establish that [Mr. Labriola] was engaged in any harassing or discriminatory behavior based on any protected characteristic within the workplace” after it interviewed all of his coworkers.

Labriola’s opinion piece was written on his own time as a private citizen and published online.

He was critical of the Equality Act’s promotion of abortion on demand, homosexual “marriage,” and transgenderism. He also criticized its threat to women’s sports and privacy, parental rights, freedom of religion, and freedom of expression, noting that it “would be used as a battering ram to prosecute and abolish the free speech rights of anyone who dares defy the left’s sexual and gender ideologies.” 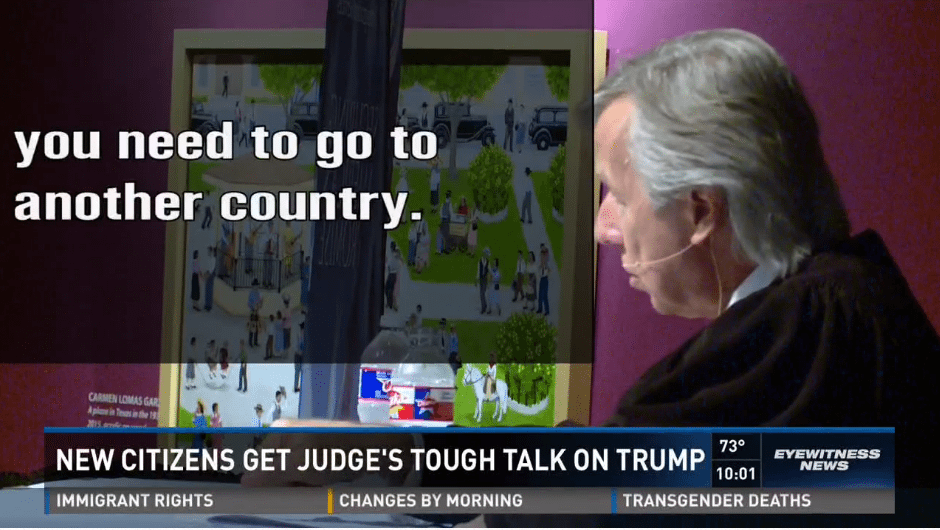 Judge at citizenship ceremony: If you don’t like Trump, you should leave