As we and others reported Thursday, Facebook, the social media giant dubbed “the world’s most dangerous censor” by Breitbart, tore down over 800 pages and accounts, claiming they engaged in “spam” or other nefarious behaviors.  Naturally, a number of conservative pages and their owners were affected, with some finding themselves essentially out of business.

Predictably, the so-called “mainstream media,” including Fox News, parroted Facebook’s announcement, proclaiming that Facebook eliminated “spam” sites.  Many of them, however, did not bother to present the other side.

An article at Information Liberation posted two graphics showing much of the media coverage, noting that many of them cheered the Orwellian move with “near-total uniformity.” 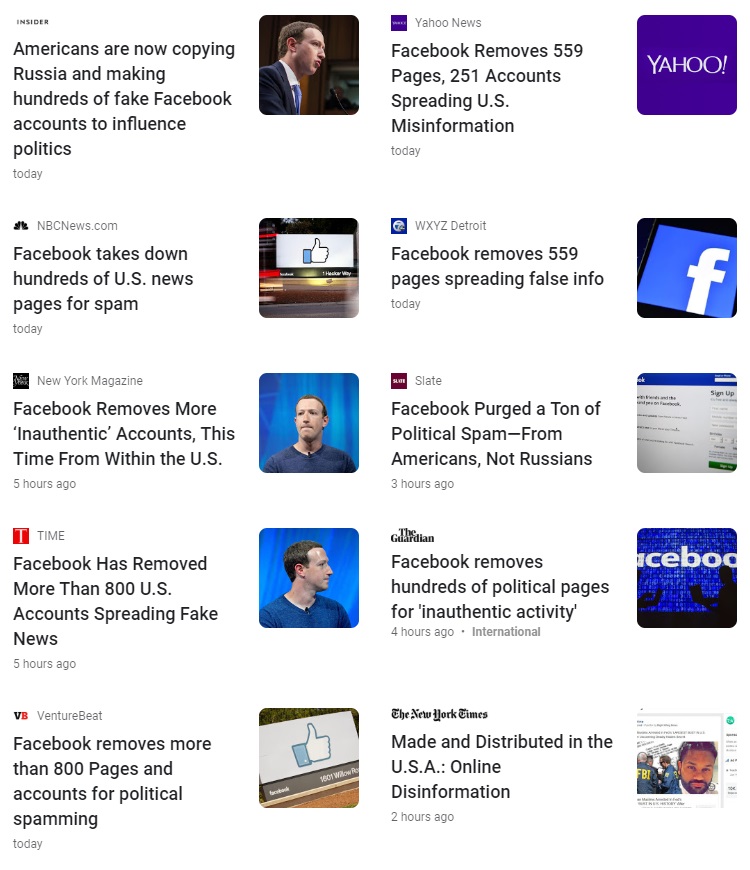 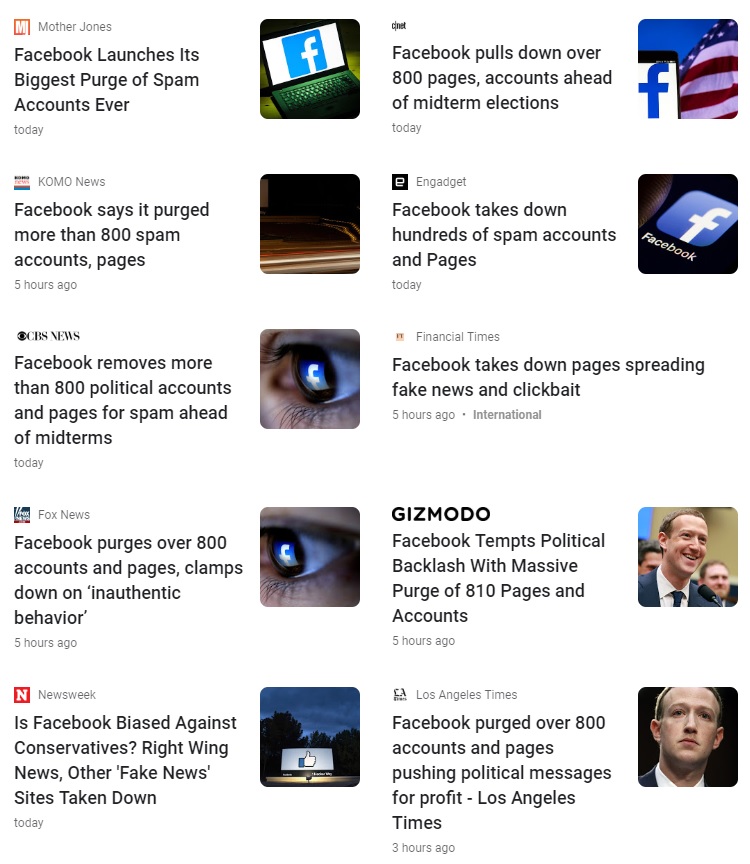 Notice anything in particular?  Much of the coverage called the affected sites “spam” or “fake news.”

No doubt, there may have been a few in the mix which meets that description.  But we know of quite a few that do not.

Uncle Sam’s Misguided Children was one such site.

Faye Higbee, a contributor who also writes for USMC, noted:

They’ve accused us of having news stories with opinions that are “indistinguishable from legitimate political debate.” They’ve accused us of clickbait- which I’ve personally NEVER written even once in my entire life and have told people who write for us not to do it. Our news articles are real and researched- interviews of United States Veterans, political figures, aggregated news from other media, all are legitimate news articles. We have the right under the Constitution to have an opinion on what happens in our country.

We’ve had very close working relationship with Facebook’s Katie Harbath, constantly pushing her to remain open with us so we could stay in compliance with their ever changing guidelines. Recently I begged her over and over to schedule a webinar with us so we could ensure compliance; after months of dialog it was finally set up for last week, but sadly she pulled the plug before it happened.

Right Wing News NEVER had a major problem with fake news, misinformation or spam. We had a rating of 4.7 stars out of 5 with over 3,000 reviews. We were the very epitome of proud Americans.

All the bad stuff you’re reading in the mainstream media about us is false. It’s a campaign to label us as “Russians” or “spammers” or a “clickbait ad farm” or “right wings nuts” pushing fake news and engaged in “coordinated inauthentic behavior” and the “spreading of disinformation.”

And that’s just not true.

ClashDaily.com engages in Misleading Users? Yeah, right. ClashDaily.com doesn’t trade in subtleties and deceit. We are a hard-charging, patriotic mosh-pit, that loves freedom, family and our flag and don’t mind challenging them that don’t with truth mixed with an irreverent sense of humor. Our brand of no-bullshit news reporting and op-eds have garnered us 230M page views in the last few years. If you define ‘misleading users’ as making them free thinking people versus Koolaid drinking Antifa clowns, then I guess we could be guilty.

ClashDaily.com‘s pages are administered by a fake account? That’s a joke. Our admin peeps have to double verify to login. Facebook has our driver’s licenses. In addition, my ClashDaily.com Facebook page was ‘blue checked’ approved by Facebook as being from me and not some zit-faced, content-farming, teen from Macedonia.

ClashDaily.com spams people? Uh, posting articles from your own website, to your own pages, is not spamming. Neither is sharing articles to private Facebook groups who love your content. Duh.

I believe Facebook made up the aforementioned vagaries so they could possibly escape the legal backlash that’s mounting against them and to pretend like they’re not against freedom of expression when everyone and their dog knows they’re trying to stifle freedom’s voice prior to the midterms. A myopic cyclops, with no eyebrows or eyelashes, staring into the sun can see that.

Giles’ observation about the timing of the Orwellian purge was also noted by Higbee, who said:

Uncle Sam’s Misguided Children has been taken down near the midterms before. Just prior to the 2012 midterms, FB unpublished us several times. We got our pages back in 2015, after no small battle and numerous appeals. We knew this latest action was coming based on their past bad behavior.

Others also noticed the timing:

Ahead of the midterms, Facebook purged 800 politically oriented pages on the grounds of spamming and “inauthentic messaging.” But Rachel’s account is real & has done none of this. Maybe she just strayed outside FB’s arbitrary political boundaries. https://t.co/paVPMaUxiu https://t.co/KQ8x9WsthR

Of course, the mainstream media is glossing over all this, choosing instead to focus on the “spam” and “fake news” angles.

The simple reality is this:  Facebook and other Silicon Valley tech giants have apparently decided they will do whatever it takes to ensure their liberal allies win in November, even if it means silencing an entire point of view.  So far, they’ve gotten away with it thanks to a compliant media that generally marches in lock step with them, truth be damned.

But thankfully, a growing number of Americans are seeing through the smoke and mirrors.

And keep in mind that while many of the sites affected — at least the ones we are aware of — may not have the resources of media giants like ABC or Fox News, they are run by honest, hard-working people who simply want to spread the conservative message and add balance to the national discussion, and the accusations being leveled against them by Facebook and their media propagandists are nothing less than utterly despicable, if not downright defamatory.

Let’s face it, we are now engaged in an ideological war against an evil foe that is willing to do or say whatever it takes to win.

It’s time for conservatives to stand for freedom — before it’s gone forever.