Democrat Senator Barbara Boxer (CA) is proving the old axiom “even a drowning man will clutch at a sword” to be oh, so true.

After spending over a third of a century as a member of the US Congress, Boxer will finally leave the Beltway and move back to California. But not before taking to the pages of USA TODAY to call for the impeachment of President-elect Donald Trump.

After spending the vast majority of her adult years drawing a paycheck ponied up by the taxpayer, Boxer’s last hurrah was a standard leftist diatribe against The Donald, but included the following;

Trump has been elected president, and he is now profiting from the results. Right now, foreign leaders are staying in Trump hotels in Washington, D.C. and all over the world. Once he takes the oath of office, it will be a clear violation of the Emoluments Clause of the Constitution, which states that that no American officeholder shall, “without the consent of the Congress, accept of any present, emolument, office, or title, of any kind whatever, from any king, prince, or foreign state.”

Experts say if Trump continues to ignore their advice, the only course is impeachment — an extreme measure that could be avoided if he took simple action now.

People ask me why the Emoluments Clause hasn’t come up before. It is because no president has ever done what Trump has done: put his assets and personal interests before the interests of the country.

Leaning heavily on the Emoluments Clause, Boxer is clearly advocating the notion that Trump is personally profiting by being the next POTUS.

However, with the venerable Oxford Dictionary defining emolument as “A salary, fee, or profit from employment or office,” the outgoing senator offers up no proof that the same “foreign leaders” from “all over the world” have, are, or will rest their collective heads on Trump pillows simply to garner favor with a President Trump.

Here’s a crazy notion – maybe they just like staying at a first rate hotel?

But I digress. Sadly for Boxer, even the same link she cites regarding the Emoluments Clause, penned by Professor Robert J. Delahunty of the St. Thomas School of Law, boils-down such as protection against any given foreign government bribing any given American officeholder.

Again, sadly for Boxer, Trump’s lawyers have and are still going through the legal machinations of separating Trump from his hundreds of companies spread out over 20 nations. All of which, a good faith effort to ensure there is no conflict of interest.

Yet in true Democrat fashion, Boxer relies on hyperbole and hysterics as her closing argument:

We are being challenged now to protect our republic from those who would undermine its very foundations.

It’s not as if Trump is running… say, the Clinton Foundation. 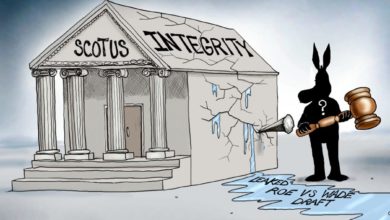 Cartoon of the Day: Ends Justify The Means