While speaking at the India Institute of Technology in Delhi on Wednesday, Secretary of State John Kerry, who, by the way, served in Vietnam, whined that it’s harder to get consensus on policy issues because there’s too many TV stations and media outlets, the Washington Examiner reported.

“[G]overning is harder,” he said.  “It is harder today to build consensus around an issue than it used to be.”

“When I was growing up in America … we also had only three major, four major television stations in the United States,” he added.

“So when I was a college student, the president of the United States, somebody from the press office would call the media, one or two networks, and say, ‘The president wants to talk to the nation tonight,'” Kerry explained. “They’d block out a half-hour, and that was it. Everybody watched it.”

He said the next day, everyone would be talking about what the president said. But today, Kerry said, everyone can pick and choose their own way to get news, which he said makes it harder to find common ground.

“That doesn’t happen today,” he said. “If a president wants to talk to the nation, he or she has to go out and fight to find all kinds of different venues, which is why the president of the United States goes on “The View” and goes on David Letterman and goes on the night show and goes on whatever — in order to be able to talk to people in segments.”

“And it takes a lot longer to build it up, and you still have trouble getting people to be able assimilate and process facts,” Kerry added.

Translation: There’s too much free press out there.

Or a shorter translation: “Waaaaaaahhhhhhhh.”

Actually, governing isn’t really any harder.  What’s harder is making everyone believe the government-approved and government-sanctioned left-wing propaganda in a digital information age where other points of view are present.  In the “old days,” there were only three — okay, may four if you count PBS — major networks.

Today, there’s a lot more outlets and they’re not all liberal mouthpieces.  Add to that talk radio, the Internet and the blogosphere.

So its harder for elites like Kerry to make everyone swallow the Kool Aid. 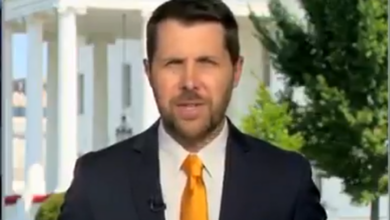