Joe Biden’s been saying he will appoint a staff representing diversity, and in a way, he has.  Some of his appointees are anti-Israel. Others are both anti-Israel and anti-Semitic. Biden’s been announced who will be on his team if he ends up in the Oval Office, and sadly, just as I predicted, his team is as anti-Israel as is much of his track record and the sentiments of the Democratic Party base.

Tony Blinken, Secretary of State,  was deputy secretary of state during the last two years of the anti-Israel Obama administration. He was part of a team negotiating the JCPOA that put the U.S., Israel, and the Sunni Muslim states in danger of an Iranian nuclear attack, and deputy director of the state department that gave the Jewish State a going away smack down in the UN Security Council. He is one of the leading voices pushing Biden to get back into the JCPOA.

Reema Dodin, Deputy Director White House Office of Legislative Affairs. Reema Dodin has excused Palestinian Terrorism and opposed U.S. support of Israel.  Of Palestinian descent, Dodin joined with Palestinians and their supporters who used to routinely and openly justify the most heinous terror attacks, blowing up buses and pizza shops, and Passover seders. In 2002, during the height of the murderous Palestinian terror spree that was killing Jews daily, she spoke at a church in Lodi, CA, condoning the terrorism saying, The suicide bombers were the last resort of a desperate people. During that same speech, Dodin falsely claimed that the Israeli government cuts off water supplies “to coerce the Palestinian population.” In fact, Israel provides abundant water to the Palestinian Arabs – far more than specified in the Oslo accords.  Dodin also falsely portrayed Palestinian Arabs (the recipients of the most generous aid in the world) as malnourished and denied medical care. 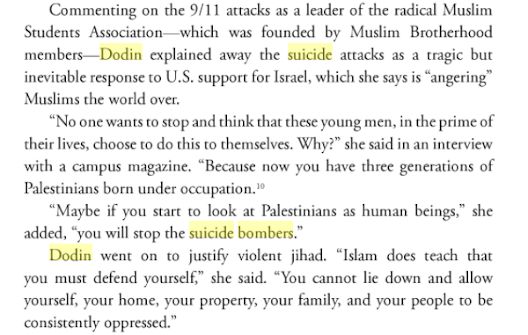 Avril Haines, Director of National Intelligence (DNI). An Obama loyalist and a John Brennan acolyte. Ms. Haines’ appointment was endorsed by the anti-Israel group J-Street.  She signed their letter to the DNC berating them for being “silent on the rights of Palestinians and on Israeli actions that undermine those rights.’  As Daniel Greenfield noted in Front Page, the purpose of the letter that Haines signed was a sell-out of the pro-Israel community.

“Currently, Avril Haines heads up Columbia World Projects. A big part of the university’s internationalization effort is the Obama Foundation Scholars initiative. Being a Foundation Scholar requires “a proven commitment to service and leadership within a community, region or country outside the United States,” and, it ought to go without saying, the right set of political agendas.

The Obama “Scholars” at Columbia World Projects she manages include Mor Efrat, the head of the Occupied Palestinian Territories Department for PHR-I. Physicians for Human Rights-Israel (PHR-I), despite its name, isn’t really about medicine. It’s an anti-Israel organization whose founder promotes BDS and seeks to try Israeli soldiers for war crimes. PHR-I’s founder had urged a move to “integrate BDS in every struggle for justice and human rights by adopting wide, context-sensitive and sustainable boycotts of Israeli products, companies, academic and cultural institutions, and sports groups.”

Even while at Columbia, Haines continued her political work as the co-chair of Foreign Policy for America. The board of Foreign Policy for America includes Jeremy Ben Ami, the head of J Street. In contrast, the Advisory Board includes Joseph Cirincione, the head of Ploughshares, a key Iran nuclear legalization pressure group, alongside Haines, and Rob Malley, the Obama adviser initially forced out for his Hamas contacts (and his father was a close friend of Arafat). He now heads Soros’ International Crisis Group. Malley is also an advisor at Columbia.

John Kerry- Climate Czar. According to Biden’s announcement, Kerry’s climate activities including some international responsibilities.  Along with his anti-Israel tenure in the Obama administration (if really you need an explanation, click here) and his belief that the Trump peace deals between Israel and Gulf Sunni states were impossible because no Arab state would make peace with Israel unless the Jewish State first made peace with the Palestinians (who refuse to make concession). Kerry’s appointment as Climate Czar makes many think of the famous line in the play “Fiddler on The Roof” when Tevye’s rabbi says, “May God bless and keep the Czar—far away from us.”

Kerry has spent much of his post-Obama tenure trying to damage Israel and Trump’s Foreign policy.

Neera Tanden OMB Director The day after the 2015 Israeli election, when Netanyahu won a surprise victory in the national elections, Hillary adviser and President of the Center for American Progress, Neera Tanden, responded to a John Podesta note calling the Israeli govt, ruthless wingnuts. 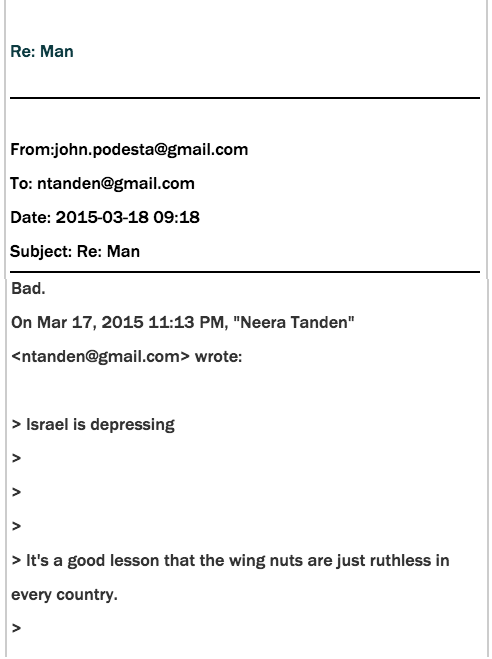 ….When it comes to the charges of being “Israel Firsters” and having “dual loyalty,” we not only plead innocent but also counter-charge that these sponsored bloggers are guilty of dangerous political libels resonating with historic and toxic anti-Jewish prejudices.

These odious charges have been around since Henry Ford in 1920 said, “Wars are the Jews’ harvest,” Charles Lindbergh in 1940 condemned Jews for conspiring to plunge America into World War II, and “Jewish neocons” were charged with colluding with Israel to cause the 2003 Iraq War. Recently, University of Chicago Professor John Mearsheimer, co-author of The Israel Lobby and Foreign Policy, has descended to making the accusation that American Jews — unlike American Poles, Italians, Greeks, Turks, Chinese, Africans, etc., etc. — exercise a uniquely malevolent influence over American foreign policy. ….

The Center for American Progress ought to stick to fair-minded discussion of serious issues about the U.S’s future. It ought to disown immediately “Israel Laster” bloggers who take the low road and drag down policy debates into the gutter of individual and group defamation.

Sadly none of this is a surprise. Biden not only wants to appoint an anti-Israel team, he Vice President for the most anti-Israel and anti-Semitic president in my lifetime. But even before he joined Obama, when he was in the Senate making his own decisions, many of Biden’s actions toward the Jewish state were negative and disturbing. For example, during his Senate years, Biden screwed up some easy ways to look pro-Israel. He didn’t sign his name to non-binding pro-Israel letters supported by his senate colleagues’ overwhelming majority. He also warned Israel that they should get used to a nuclear Iran.

As Obama’s Defense Secretary Robert Gates noted, Biden has “been wrong on nearly every major foreign policy and national security issue over the past four decades.” One of those foreign policy “wrongs” was his lack of support for America’s closest ally in the Middle-East- Israel. He is putting together a team that will support his anti-Israel mistake. 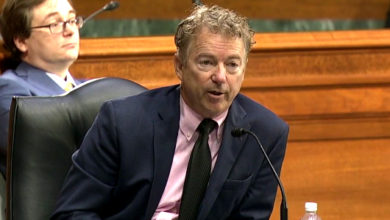