Now, this is going to be fun. On Thursday Democratic New York Rep. Alexandria Ocasio-Cortez used Twitter to slam the Times Square billboard that criticized her as ‘wack.’ The Job Creators Network, the organization that put up the first billboard, didn’t respond with a tweet, instead, they put up a set of two new billboards.

In response to criticism from Rep. Alexandria Ocasio-Cortez via Twitter on Wednesday and Thursday, the Job Creators Network erected two new billboards at the prominent intersection of 7th Avenue and 42nd Street in Manhattan’s Times Square.

Ocasio-Cortez called attention to the original ad boiling down the situation to “billionaire-funded groups blowing tons of cash on wack billboards.”

Few things effectively communicate the power we’ve built in fighting dark money & anti-worker policies like billionaire-funded groups blowing tons of cash on wack billboards (this one is funded by the Mercers).

The new billboards constructed Friday by the Job Creators Network poke fun at the tweet, as well as put it into context.

The top billboard states “Hey AOC, Saw your wack tweet.” The second ad, located just below the first, goes on to call attention to the fact that although the billboard costs about $4 thousand, Ocasio-Cortez’s actions contributed to the loss of $4 billion in annual wages for New Yorkers. 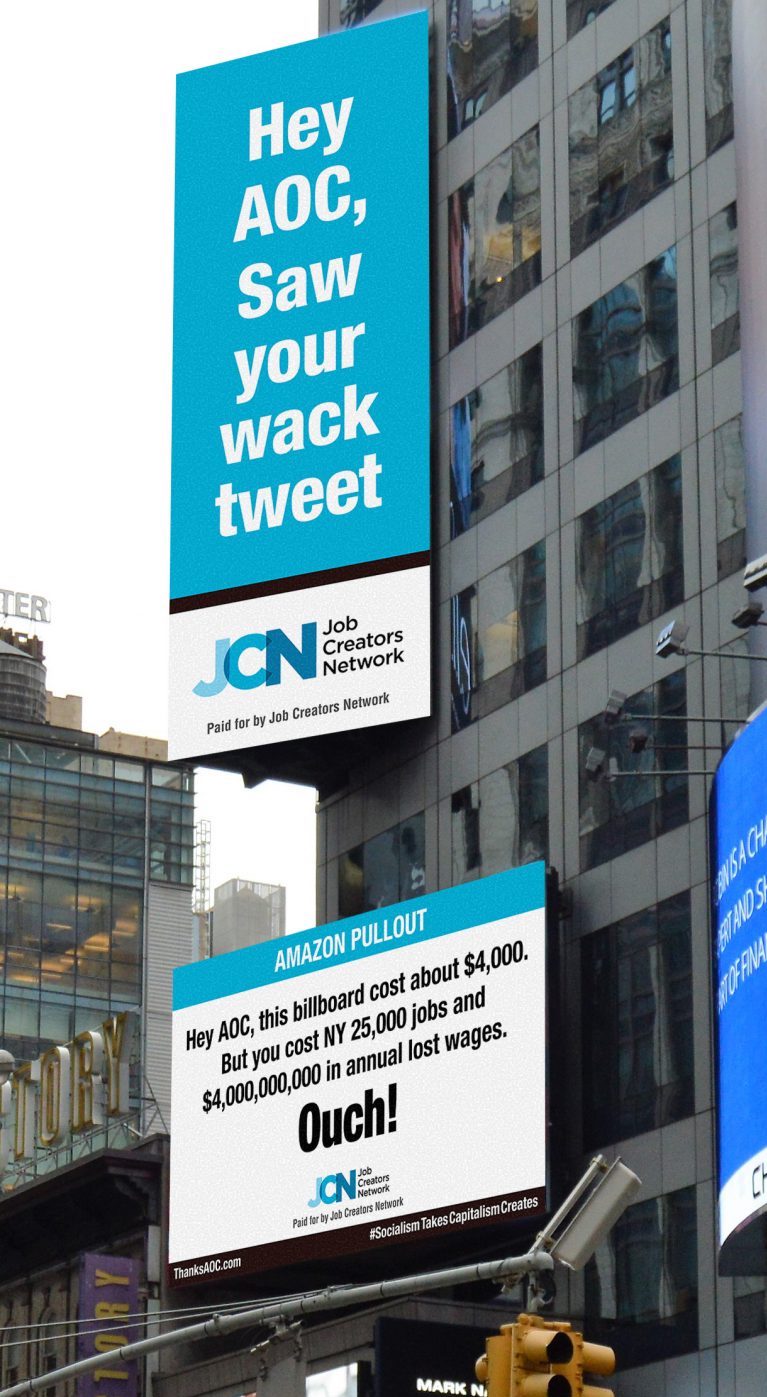 “Facts are facts: while the Job Creators Network did spend some money highlighting the economic consequences of the Amazon pullout, Ocasio-Cortez deprived New York of 25,000 new jobs and $4 billion in annual wages,” said Alfredo Ortiz, JCN President, and CEO. “She can call us out all she wants about how we spend our money, but it’s clear that most people care more about how she spends theirs.”

JCN President Alfredo Ortiz was on Fox Business Network to discuss the billboards. A video of that interview follows: