Wright told The College Fix the trip is scheduled for Dec. 29 to Jan. 8 and she is still going. She describes it online as “visiting Israel and the Palestinian territories to meet with politicians, journalists, and locals from all sides to better understand a very nuanced geopolitical conflict.”

A press release published by the student government, meanwhile, argues its members aim to ensure student government representatives do not accept expensive gifts based on their status as campus leaders. Doing so “compromises their ability to be perceived as impartial when representing the entire student body on the Board of Directors.”

Jordan Wright explained what happened in a posting on her Facebook page:

(…)As a result of my decision to participate on the trip, last night, the SSMU Legislative Council voted to call for my resignation from my positions in student government. The SSMU President personally singled me out, and actively encouraged others to attack me. Only I was targeted, despite the fact that another non-Jewish Councillor will also be joining me on the trip. I am outraged and disgusted, but not surprised. This is not the first time that Jewish students at McGill have been bullied out of student government.

I have also been subject to attacks by members of student government in my own faculty. At Science’s General Council last week, I was blindsided and interrogated on-the-spot for almost two hours about my participation in Hillel Montreal’s trip. Not only were the questions designed to target and intimidate me, but I was purposefully prevented from having sufficient time to find the information they wanted.

This week, the Science Executive Committee also voted to give me an ultimatum: either I withdraw from the trip, or I resign from my position. If I do not resign, I am being implicitly threatened with impeachment upon my return.

(…)In the past, I was warned about getting involved in student leadership at McGill. The toxic environment, countless scandals, prohibitive anti-Israel sentiment, and anti-Semitism have led to a tainted image of an unfriendly campus for Jews. Two years ago, three students were voted off of the SSMU Board of Directors simply for being Jewish or connected to pro-Israel organizations. Last year, a Political Science summer exchange course taught at the Hebrew University of Jerusalem was the source of a controversy in which pro-Israel students were harassed and cyber-bullied. This year, I am feeling the discriminatory burden that our student politics routinely places on Jewish and pro-Israel students.

We believe that this session was politicized due to the motivations and efforts of certain individual members of the Council according to their privately-held political beliefs. We believe the direction of the debate was focused on a specific member, Jordyn Wright (U1, Science Councillor), in a way that was startling and unwarranted. We are not surprised that Councillor Wright subsequently expressed that she felt targeted and attacked during this session, and we agree that the nature of the motion and its amendments as adopted by the session were hostile, directed, and should be a matter of wider concern.

The letter also states that there is another non-Jewish member of the Council going on the same trip, but only Ms. Wright was mentioned and received the ultimatum.

Now, the Council appears to have taken the position that Councillor Wright is in a conflict of interest because of her Jewish identity. That the President would identify Councillor Wright uniquely in this context is seriously problematic.

Appears?  That’s too nice, it was definitely anti-Semitic.

“Two years ago, three students were voted off of the SSMU Board of Directors simply for being Jewish or connected to pro-Israel organizations. Last year, a Political Science summer exchange course taught at the Hebrew University of Jerusalem was the source of a controversy in which pro-Israel students were harassed and cyber-bullied,” she stated. “This year, I am feeling the discriminatory burden that our student politics routinely places on Jewish and pro-Israel students.”

And there’s a happy ending.  After Wright’s story was covered by media across Canada, Israel, and the US, the SSMU voted to drop the motion during a meeting of its board of directors.

Good for you Jordyn I am proud of you for standing your ground. I pray that you have a wonderful trip: הבאנו שלום עליכם

Update: The Deputy Provost sent this letter to the school community. 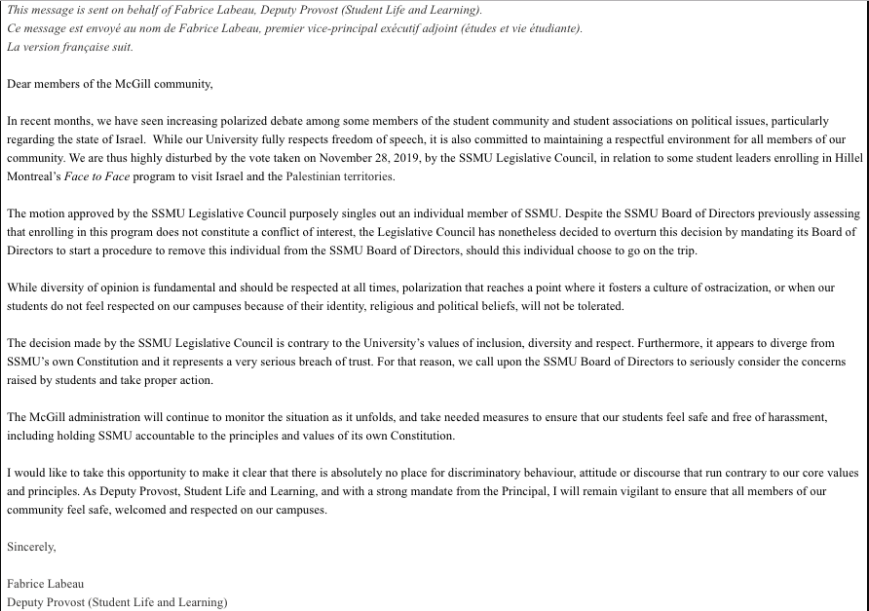 Hidden In Not So Plain Sight: How The Global Agenda Is Popping Up In Your Town
May 5th, 2021 Sons of Liberty Media

Why Are We Teaching Kids That America Was Always Racist?
May 5th, 2021 The Lid

St Louis Councilmember is excited that they have defunded 100 police – While Crime skyrockets
May 5th, 2021 The Joe Messina Show
Tweets by Conservative Firing Line