AS always, the path of least resistance appeals to countless, even to those who should know better. But never mind. Let’s just call them what they are: lazy good for nothings. Similarly, die-hard leftists, wedded to their idée fixe of multicultural (psychotic) inclusion, are incapable of recognizing when said warped ideology is tantamount to a death sentence. Yes, leftism über alles. Regardless, when all is said and done, both sides of the spectrum are equally poisonous. After all, dead is dead, the end-point being the same. You got that?

THAT being established, when it comes to shielding, aiding, abetting, or otherwise apologizing for Allah’s Muslim Terrorists, those who understand what’s what must never grant the aforementioned any – emphasis placed – quarter. This is a no-brainer.

RESULTANT, this investigative journalist and Brotherhood expert exerts enormous heavy-lifting when it comes to alerting the public to the overriding dangers from Islam’s thrust into the west. Thus, anyone who dares to assist their reach, well, nothing is off the table. So much so, a book was written to up the ante, that is, to forewarn of particular “hidden” dangers.

HOW many times has Minnesotastan been exposed at this site, as well as too many other jihadi-rife states to enumerate?

OH well, some have to be bush-wacked….butt-smacked…and otherwise stepped-over until they get the message! And, if that doesn’t work, let Allah’s Muslim Terrorists send them (or their loved ones) a direct jihadi message! Whatever it takes. Comeuppance.

The Board of Trustees of Oak Street Chapel in Brainerd plans to ask Pastor Todd Wooden (right) to resign in the wake of a controversial speaker coming to the church Thursday to speak against Islam. Board President Dace Julifs said Friday that Islam-expert Usama Dakdok’s presentation didn’t reflect any of the congregation’s misguided views about Islam.

“That was a pastor gone rogue,” Julifs said. “Oak Street Chapel, we are a kind and caring and open people.”Wooden has been a member of the non-denominational Christian church since 2000 and has pastored the church since 2013.

Julifs denounced both the presentation and comments Wooden made in a Dispatch article that ran Friday. Although Julifs did know about the presentation in advance, he said, he was under the impression it would be an deceptive meeting about the Muslim community and how non-Muslims could co-exist with them (they can’t).

The presentation wasn’t sanctioned, he said. Wooden is supposed to represent all of the congregation, but instead he looked out for the needs of just one member: Daryl Bahma, whose “Defenders of the Constitution” sponsored the event in the first place. “They took it upon themselves to use our facilities,” Julifs said. “(The) people at Oak Street Chapel are such good people. It’s tearing me up to know that they got ran through the mud like this.” (No, they were confronted with the truth about Islam)

The church was forced to take down its website because of all the negative messages they received in response to the presentation, Julifs said. He said the church’s web administrator was reduced to tears after she read some of them.(Oh, please, save your crocodile tears. Those negative comments were coerced by a twitter post from designated terrorist group CAIR)

Contacted by the Dispatch and informed the board wanted him to resign, Wooden laughed. He said he didn’t regret Dakdok speaking in the church and that he wouldn’t resign. “Why would I?” he said.

Wooden said a screaming match between Dakdok and several protesters was “unnecessary.” He also took issue with Dakdok repeatedly calling Americans “stupid” for their acquiescence to the spread of Muslims. Whether Dakdok’s presentation was Islamophobic, though, Wooden couldn’t say for sure.

“I don’t know how to answer that, really, because I really don’t understand all the elements of Islam at this point,” he said and later added “that would be like calling a Muslim-American America-phobi(c), wouldn’t it? Because they’re so passionate about Islam being the only way to bring peace to this world.”

He said he talked to the chair of the church’s ministry and several members of the church who gave him positive feedback about the presentation. Asked to specifically name people, Wooden said that would be a breach of pastor-parishioner confidentiality.

EVEN more so, what about the brazen, in-your-face Muslim-American “activists”, you know, those who openly proclaim their jihadi aspirations while under the proverbial wings of officialdom, be it in NYC or elsewhere? Yes, who recalls Linda Sarsour? If not, time to catch up. Besides, another one is nipping at her heels.

AND, as night follows day, what can anyone expect when Islam is coddled above all else, almost as if America wasn’t founded on Judeo-Christian underpinnings??

N.Y.-Based Egyptian-American Activist Ayat Oraby Calls for Economic Boycott of Copts: The Crescent Must Always Be on Top of the Cross. (Memri).

In a video posted on her Facebook page on September 21, New York-based Egyptian-American activist Ayat Oraby called the Coptic church “a gang, striving to establish a Coptic mini-state,” and “a full-fledged mafia,” and described Pope Tawadros as “a criminal.” Oraby called upon Muslims to participate in an economic boycott of Copts, saying that:“They must be made to understand that the crescent must be on top of the cross.”

Related: I seem to recall her name, and a quick search revealed her‘Muslim Brotherhood hatred‘ for the Copts.

The Arabic term “Islam” itself is usually translated as “submission”; submission of desires to the will of God. It comes from the term “aslama”, which means “to surrender” or “resign oneself”.

MOST significantly, leave it to so-called religious leftists, Christians and Jews, the most dangerous surrenderers of all. How so? Well, they lend the non-kosher fig-leaf of “legitimacy” to Allah’s Muslim Terrorists, as if their fantasies will shield the nation from egregious malfeasance.

DAMN them all to Islam’s pit-fire of hell!

The Inextricable Linkage Between Islamic “Refugees” (Immigrants) And Jihad. Americans (Westerners), You Are Forewarned 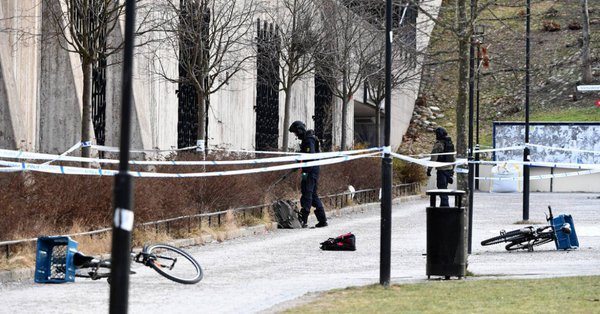