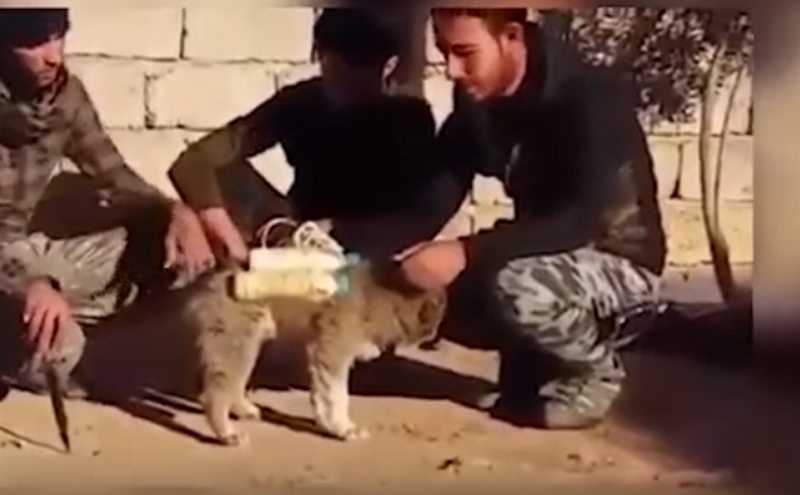 A video has surfaced that the terrorist group, ISIS, also known as the Islamic State (IS), which shows ISIS members strapping explosives to puppies in order to help commit attacks against unsuspecting civilians and U.S Forces.

Although ISIS has been kidnapped children and using women to carry out suicide missions, this is a first where young puppies are being used.

Although the authenticity of the video has yet to be verified, the video appears to show that ISIS is using the puppies for their purpose.

The authenticity of the video is currently unclear but it appears to show Islamic State jihadis, known for their improvisations on the battlefield, have wrapped the tiny animal’s torso with explosives before sending it across the front line.

The horrifying video was apparently uploaded online by fighters with the Iraqi Popular Mobilization Units.

The PMU, or Al-Hashd Al-Sha’abi, is a group of militia, brought together and state-sponsored to battle with jihadis in Iraq.

In 2014 the group was incorporated into the country’s armed forces to help fight on the battlefield as major cities were overtaken by terrorists.

Three PMU fighters crouch over the small animal in the video, one resting a knife on the ground as they speak to the camera about the find.

They tell the camera the dog is strapped to four bottles, likely filled with shrapnel.

According to the men, if detonated it could kill three of four people.

ISIS has also expanded its capability to where the U.S. military is alarmed that the Islamic State (ISIS/ISIL) in Iraq is using commercially available drones to drop small bombs with “pinpoint accuracy” in and around Mosul, the jihadist group’s last major stronghold in the country.

ISIS Welcomes Biden To Presidency With A Double Suicide Bombing In Baghdad
January 22nd, 2021 The Lid

Did You See What The Last Administration Did Before Leaving Washington D.C.? Let’s Call It For What It Is…
January 22nd, 2021 Sons of Liberty Media