Omar (D-MN) began by tweeting a conspiracy theory early Friday morning, suggesting the President wanted to take people’s minds off the impeachment fiasco by starting a war in Iran.

“So what if Trump wants war, knows this leads to war and needs the distraction?” she asked followers, some of which take her comments seriously. “Real question is, will those with congressional authority step in and stop him?”

Crenshaw (R-TX), a decorated Navy SEAL who lost his eye during his third tour of duty in Afghanistan and still went back for two more tours, fired back at Omar and the Democrat party’s reaction to the airstrike.

In particular, he argued that the United States was well within its authority to go after Soleimani.

“This happened in Iraq against an enemy that attacked us in Iraq, in which we have plenty of authorization to be operating in,” he said in an interview with Fox & Friends.

Crenshaw continued railing against Democrats for being cowards in the face of adversity.

“Iran attacked our base recently. Then, they attacked our embassy or they fully supported the Shia militias that did attack our embassy and base,” he said. “Are we supposed to just let that happen?”

“And to say yes would be absurd, and I don’t understand when Americans became so fearful.”

Omar Says Something Even More Absurd

Not deterred by the fact that she’s essentially siding with terrorists because of her disdain for President Trump, Omar followed up her initial assessment with something far more absurd.

The extremist Democrat responded to Senator Ted Cruz who asked, “Why are congressional Dems outraged that he’s [Soleimani] finally dead?”

The expected response would have been ‘We’re not outraged that he’s dead, we’re outraged over …’

But nay, Omar is, and her colleagues are as well apparently, outraged over Soleimani’s death!

Weird watching Democrats suddenly concerned about congressional authorization when President ‘Drone Strike’ Obama didn’t worry too much about it for eight years.

Meanwhile, the man whose death Omar is “outraged” by had been planning an “imminent attack” on American forces according to Secretary of State Mike Pompeo.

It’s not too much of a stretch to assume that, had that happened, Democrats wouldn’t be nearly as outraged. 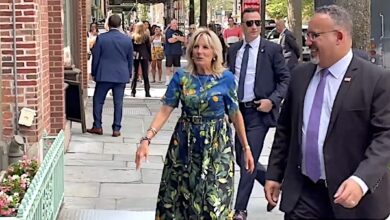 ‘Your Husband Is The Worst President We’ve Ever Had!’: Jill Biden Jeered (Video)