Huysman decided that she would take her case to Facebook and even showed off bruises on her arms as so-called proof. However, Chief Brandon del Pozo released the bodycam footage which showed an impaired Huysman acting disorderly, using foul language and assaulting police officers.

Not only that, but Chief Brandon del Pozo even responded directly to the girl’s Facebook post, prompting a wave of outrage at the girl’s behavior which resulted in her deleting the post.

Viewer Discretion is Advised Due to Foul Language

The ACLU is not happy that the chief released facts about the case in order to counter lies spread by Logan Huysman, accusing him of using facts to “shut down conversations.”

“There’s a fine line between engaging the community, which is something we want our law enforcement officers to do, and doing what some might see as trying to shut down conversations,” said Jay Diaz, an attorney for the American Civil Liberties Union of Vermont, according to Katie Jickling with Seven Days. “Affirmatively posting on a citizen’s Facebook page, especially in a sensitive situation, seems fairly inappropriate and would be understandably chilling.”

This isn’t the first time that the Chief del Pozo has responded to police-haters on social media and created controversy.

He has learned that people who post anti-police statements on a public forum, such as their open Facebook or Twitter pages, tend to become very uncomfortable when engaged directly.

When former city councilor Haik Bedrosian posted to social media that the department’s new badge design “belongs on a robot soldier in a dystopian future police state,” this chief respectfully responded in a private message.

“Writing it off … is your prerogative and your opinion, but you should also take seriously the months of careful work a lot of people put into it,” del Pozo wrote, according to Seven Days. “They were not robocops, but nearly all born Vermonters who have a deep affinity for the city and its police.”

Bedrosian says that he was shocked by the intimidation in the message, and even after deleting the message and blocking the chief he said, “I remain intimidated by Brandon del Pozo to this day.”

On June 22, the date of Logan Huysman’s arrest, officers located a group of unconscious teens in a running car in a parking lot at Cumberland Farms on Pine Street.

Officers worked to rouse the teens who were passed out next to marijuana and alcohol. During the 90-minute ordeal, Huysman demanded that the officer pay her $80 for her marijuana bong, threatened suicide, performed cartwheels, destroyed paperwork, reached into her waistband and simulated producing a gun with her hand, pointing it at officers, screamed at officers, resisted arrest, and assaulted officers.

Logan Huysman was ultimately arrested and charged with disorderly conduct, resisting arrest, and simple assault on a law enforcement officer.

After her release, Huysman claimed on social media that police touched her inappropriately, and posted pictures of her bruised arms. “I would consider that sexual assault, especially coming from ‘authority,’” she said. She later claimed that the post was meant to be a “wake-up call” on police misconduct, indicated that she has still failed to take responsibility for the situation even though she now says that she regrets making the post.

Logan Huysman’s father saw the footage and it siding with the police, saying, “She was resisting arrest, and she had to be forcefully put in the police car. The police showed more patience than I would have.”

Did Huysman learn her lesson? 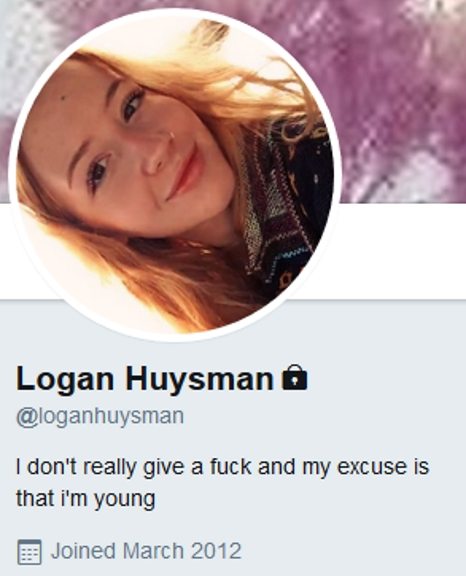 The rest of her twitter feed was almost exclusively based on bashing President Trump and other so-called socialist causes.