In its effort to maintain its editorial position that anything done by President Trump or the Immigration and Customization Enforcement (ICE) is evil, the NY Times published a report about the arrest of an illegal immigrant from Mexico that was both technically true and fake news at the same time.

The headline of the article published on August 19th was disturbing. It gave the reader an idea that an illegal immigrant a man rushing his wife who was in labor to the hospital was stopped and arrested by ICE. However, the headline left out some essential facts which would have told a much different story: 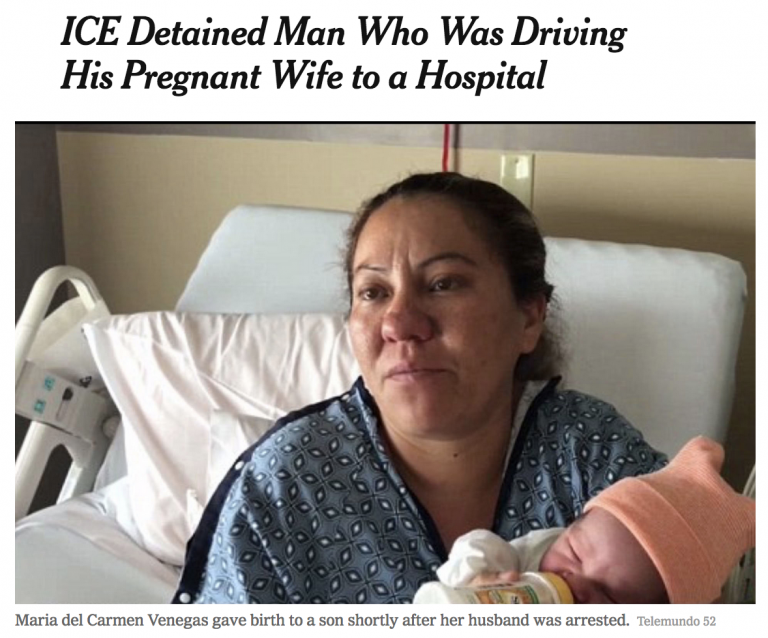 A man was driving his pregnant wife to a scheduled cesarean section on Wednesday when immigration officials arrested him — leaving her to drive herself to a hospital and have the baby on her own, according to the woman and the family’s legal representative.

Perhaps a better headline would have been, “ICE Detained Man Who Was Driving His Pregnant Wife to Hospital For Scheduled ‘C’ Section.”

But that revised headline would still be skewed:

The couple had pulled into a gas station in San Bernardino, Calif., on their way to deliver their child. While they were there, Immigration and Customs Enforcement officers came to their car window and asked for identification, said the woman, Maria del Carmen Venegas.

Her husband, Joel Arrona-Lara, 35, did not have his driver’s license with him, and officers arrested him, she said.

The arrest quickly provoked outrage and fed into a growing anger toward ICE and the Trump administration’s sweeping immigration policies, which have expanded who is considered a priority for officers to arrest. In recent months, immigrants have been arrested while delivering a pizza or watering the lawn.

So did they arrest him for not having his license?  Now down in the fourth paragraph, the Times wrote:

On Saturday, ICE said in a statement that Mr. Arrona-Lara, a citizen of Mexico, was in the United States illegally. Later, the agency released a second statement saying he was wanted for homicide in his home country. “Mr. Arrona-Lara was brought to ICE’s attention due to an outstanding warrant issued for his arrest in Mexico on homicide charges,” the statement said.

Wait a second! The guy was wanted for murder? Why were they hiding that fact until the fourth paragraph? That’s easy, they were trying to mislead their audience. That fact should have been in the lede.

What the headline should have read is something like, “ICE Detained Man Wanted For Murder, Who Was Driving His Pregnant Wife to Hospital For Scheduled ‘C’ Section.”

This story was a great example of how the NY Times and other’s in the MSM can skew the story with the headline and where they place facts within the article.

It is reminiscent of a joke about Microsoft:

A helicopter was flying around above Seattle when an electrical malfunction disabled all of the aircraft’s electronic navigation and communications equipment. Due to the clouds and haze, the pilot could not determine the helicopter’s position and course to fly to the airport. The pilot saw a tall building, flew toward it, circled, drew a handwritten sign, and held it in the helicopter’s window. The pilot’s sign said “WHERE AM I?” in large letters. People in the tall building quickly responded to the aircraft, drew a large sign and held it in a building window. Their sign read: “YOU ARE IN A HELICOPTER.” The pilot smiled, waved, looked at her map, determined the course to steer to SEATAC airport, and landed safely. After they were on the ground, the co-pilot asked the pilot how the “YOU ARE IN A HELICOPTER” sign helped determine their position. The pilot responded, “I knew that had to be the Microsoft building because they gave me a technically correct, but completely useless answer.”