It happens after many natural disasters; looters grab the opportunity to grab anything else that isn’t nailed down, but this time in Houston, they may have crossed the line.

WDSU reported that rescue volunteers from neighboring Louisiana, dubbed the “Cajun Navy,” were fired at Monday by alleged looters. The situation apparently is bad enough that in Montgomery County prosecutors have promised to jail or imprison anyone apprehended while looting, committing a robbery or burglary, “or any similar crime.” Here’s a snip from the district attorney’s Facebook page: 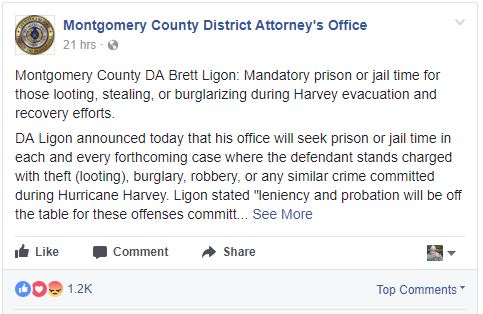 This is Texas, after all, and it is “gun country” where looters may suddenly find themselves taking return fire if they happen to shoot at somebody.

The “Cajun Navy” became something of an entity when scores of private citizens responded to last year’s flooding in parts of Louisiana. It was only a dozen years ago this week that New Orleans was devastated by Hurricane Katrina, and the situation in Houston with Tropical Storm Harvey appears much worse with horrific deluges of rain that do not seem to let up.

Gun rights advocate Alan Gottlieb put it in perspective with this observation: A foot of snow usually translates to an inch of water. Think of the Midwest being hit with 50 feet of snow. That’s a rough comparison with the disaster in southeast Texas.

President Donald Trump visited the area Tuesday and may return later in the week.

Where the Cajun Navy is playing a key role is in rescue efforts. They have arrived in Texas with their own boats, taking on the role of first responders.

It was not clear whether the alleged looters who apparently fired shots at these Louisiana volunteers were trying to steal their boats or simply rob them.

Over the weekend as then-Hurricane Harvey pounded ashore along the Gulf Coast, there were some 2,000 rescue missions, according to KTRK News, quoting Police Chief Art Acevedo. He said there had already been some arrests for looting, and he said Houston law enforcement is remaining vigilant.

The Los Angeles Times reported that pentagon officials are already preparing for the possible call-up of up to 30,000 National Guard troops to help in the crisis. Texas Gov. Gregg Abbott has already called out the Texas National Guard, about 12,000 troops. The newspaper said that about 3,500 of those Texas guardsmen are already involved.

Images of apparent looters have already showed up on social media, and there is no doubt that Texas authorities will deal with them as the region recovers from the storm.