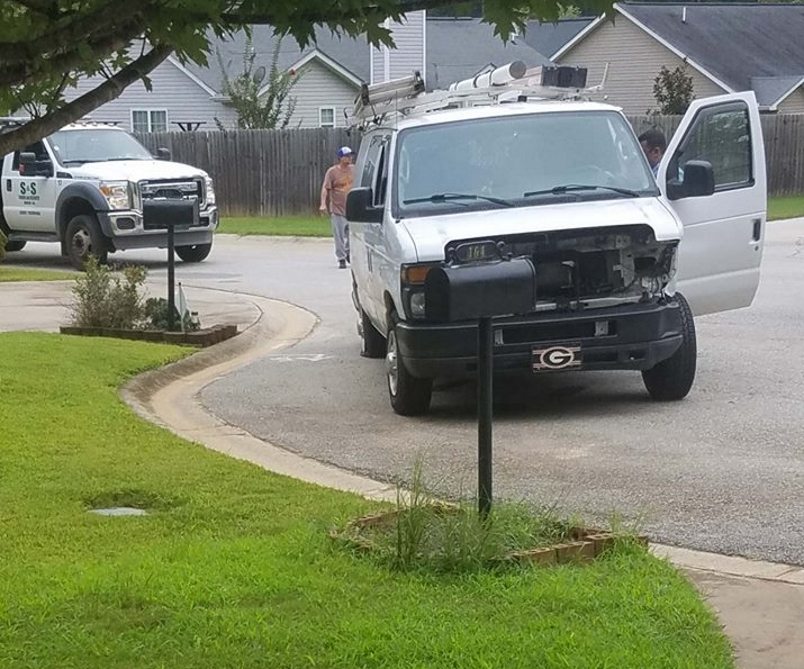 Police are investigating an incident on Thursday morning after a vehicle sustained heavy damage by a hit-and-run suspect on Highway 61 in Dallas, Georgia.

UPDATE: On Thursday evening, a Jarrett Gordon Baskin was arrested for DUI, Driving with a revoked/suspended license, fleeing the scene of an injury accident that resulted in injuries, and failed to yield at an intersection and is being held on a $3400 bond and being held for prosecution.

The unknown suspect fled the scene and entered a subdivision off of Happy Valley Church Rd and was followed by a Department of Transportation employee.

The suspect ended up in a cul-de-sac where he left the vehicle in front of the home of  Conservative Firing Line writer Christopher Collins, and ran between his house and a neighbor’s home and up a hill into a large wooded area.

The van had a retired Navy veteran tag and an empty bottle of vodka was seen in the vehicle along with some court documents.

Paulding County Sheriff’s office and the Georgia State Police have no further information at this time.

Updates will be forth coming when more information has been received.

The Paulding County Georgia Sheriff’s office continues to look for the following four most wanted fugitives:

Please contact the Paulding County Sheriff’s Office anonymous tip line at (770) 445-5535 with the whereabouts of any of these individuals or you may also email your tip to [email protected].

Pfizer VP Gov is lying to you!
April 11th, 2021 The Real Side With Joe Messina
Tweets by Conservative Firing Line