Word got out a couple of days ago that the Proud Boys and a pro-police rally were coming to Portland. Police stated that they didn’t have the resources to keep them separated from Antifa. Cue the anticipated donnybrook. But later, early Sunday morning, the scene went doubly violent when Antifa brought a guillotine to the riot, along with a teddy bear to symbolize Portland Mayor Ted Wheeler. Remember this, if you align yourselves with radical leftists, they will turn on you. It’s a given. 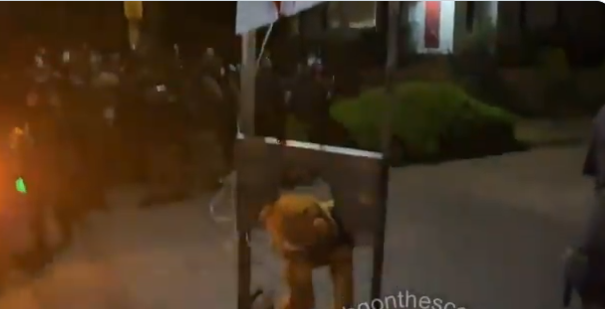 First, the donnybrook. For those of you unfamiliar with the term it means a scene of “uproar and disorder.” And punching, attacking,  pepper spray, sticks and bats, the usual way that Portland Antifa operates. The pro-police rally goers tended to not take that sort of thing, so Antifa got hammered in kind.

PB and Commie Pantifa going at each other at the justice center in Portland.

"There will likely be a lot of violence in downtown. Commie terrorist Pantifa from all over are mobilizing for this. Police do not have the resources to keep groups separate." pic.twitter.com/tVqt2CXJ57

The antifa mob chases a right-wing group that got splintered off after the pro-police rally. #Antifa trash the parking garage in the course of the attack. #PortlandRiots pic.twitter.com/gnC6GtxvpB

🤡Commie terrorist PANTIFA follows a small group of PB back to their cars as they were leaving. Guess who they call when they get man handled? 🤣 Thats right THE POLICE. The same POLICE they have attacked every night. pic.twitter.com/jAQJY8DBW9

So the scene of violence continued in the daylight, but turned especially ugly overnight with an Antifa guillotine threat against Mayor Ted Wheeler and the United States. It was a visual that made their actual intent very clear.

#PortlandRiots: Antifa threaten police with a guillotine prop in outside the Penumbra Kelly police building. pic.twitter.com/pleIwZhkJY

#PortlandRiots: Antifa brought a guillotine and toy bear to their violent protest. The teddy bear represents @tedwheeler, who they’ve threaten to hurt or kill because he’s the police commissioner & they blame him for not abolishing police. pic.twitter.com/jF9Fn7DCBx

#PortlandRiots: Antifa showing the public a visual representation of their political agenda. They put US flags on the guillotine prop and set all of it on fire outside the SE police building. pic.twitter.com/9iLTVIPVJD

So the gist of all of this with the visual from the Antifa guillotine tells you one thing: they want to destroy the entire nation, and do not care whether you are placating them or not. You can stand with the rioters and try to be nice all you want, but it will not end well. They do not care. And they are bent upon reaching their “comrades” in other cities with their violent methods – which has worked well. On Sunday morning, Denver rioters smashed up windows, attacked a police department and a courthouse.

“Much of the violence enacted by antifa and BLM is for propaganda uses. They hope their acts of criminality inspire comrades in other cities. It’s worked as the same strategies are being put into practice elsewhere.” Andy Ngo

Much of the violence enacted by antifa and BLM is for propaganda uses. They hope their acts of criminality inspire comrades in other cities. It’s worked as the same strategies are being put into practice elsewhere. #PortlandRiots #antifa pic.twitter.com/GoV1ykthua

So there you have it, America. As long as these violent anarchists are allowed their vicious plans with no repercussions, this will continue to be a threat.

Their “black bloc” members have marched through residential neighborhoods, shining lights on people’s homes, shouting, chanting, and daring them to come out. If the residents do come out, they are threatened. How long before the residents’ homes are burned down and graffiti’d like government and business buildings? This needs to stop. There is no time left.

NPR Mocks Capitalism, But Is More Than Happy to Take Massive Chunk of Money from Corporations
June 13th, 2021 Flag And Cross