Twitter bans are nothing new- Conservatives frequently meet the pointy end of the Twitter team’s censorship. But when Fox Nation host Pete Hegseth posted a screenshot from the NAS Pensacola shooter’s terrorist manifesto, he was knocked off the social media platform for promoting terrorist ideology. (Townhall) 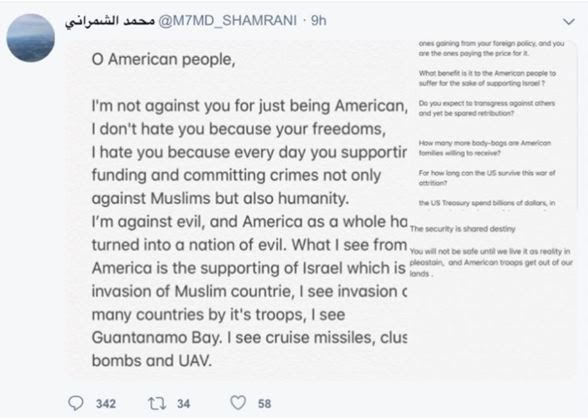 – A lengthy manifesto posted at 4:39am Friday, less than two hours the shooting. The manifesto read in part:

‘I’m against evil, and America as a whole has turned into a nation of evil.

‘I’m not against you for just being American, I don’t hate you because [of] your freedoms, I hate you because every day you [are] supporting, funding and committing crimes not only against Muslims, but also humanity….”

Alshamrani used a 9mm Glock to kill 3 and wound 8 before he was shot and killed by police at NAS Pensacola. He was an Islamic terrorist, plain and simple.

If they can ban me, they will ban anyone. We need to fight back. Heck, I posted the terrorist screen shot on this post too, so stay tune for @instagram banning me too.

Big tech does the bidding of the Left, especially to include anyone who speaks truth about the threat of radical Islam.” Pete Hegseth Instagram post

Truth telling is not popular among the left wing cowards who hide behind their “rules” and “community standards.” And Islamists/jihadists/radical Muslims are a case in point – the social media platforms are so “politically correct” that they actually enable terrorists. When a US Army veteran speaks the truth, he’s censored and kicked off the platform. We’re pretty certain, however, that because he has a large audience, this is only temporary.

We at Uncle Sam’s Misguided Children get the pointy end of social media censorship frequently for posting everything from articles to memes. We get “restricted” or outright banned. We’ve lost hundreds of thousands of dollars in income because of it. He’ll still get paid, we do not. Our CEO is a US Marine veteran. ‘Heck, Pete,’ we’d love to fight back, but the money to do so is extremely difficult to come by.

“I’m sure @twitter will heed my “appeal”… #banned“  Pete Hegseth

D.C. Mayor Violates Her Own Mask Mandate Hours After It Takes Effect — CNN Runs Cover For Her (VIDEO)
Clash Daily

CBP Confronts: 190,000 Illegals A Month, Many With COVID Released Across U.S.
The Lid