This isn’t going to sit well with quite a few folks, specifically, Independents and moderate Republicans.  Not to mention Trump supporters…

It seems that a former Trump field manager has accused the campaign of sex discrimination, alleging the campaign paid her less than her male counterparts for the same job.

Moreover, the former manager said the men were allowed to plan and speak at rallies, but her requests were ignored.

A former paid organizer for Donald J. Trump who was fired this month has accused his presidential campaign of sex discrimination.

Elizabeth Mae Davidson, 26, who was the Trump campaign’s field organizer here in Davenport, Iowa’s third-largest city, said in a discrimination complaint that men doing the same jobs were paid more and were allowed to plan and speak at rallies, while her requests to do so were ignored. She also said that when she and a young female volunteer met Mr. Trump at a rally last summer, he told them, “You guys could do a lot of damage,” referring to their looks.

The complaint was filed on Thursday with the Davenport Civil Rights Commission. Mr. Trump’s spokeswoman and campaign manager did not respond to calls, emails or text messages sent late Saturday night and Sunday morning.

Ms. Davidson, of Bettendorf, who had recruited volunteer organizers for most of her region’s 63 precincts and opened a Trump campaign field office, only the second in the state, was fired on Jan. 14, the day after a New York Times article portrayed problems with the campaign’s senior Iowa leadership, to whom she reported.

The Times also spelled out the specific allegations:

Ms. Davidson’s complaint says that men with the same job title — district representatives — were quoted in news accounts without being fired by the Trump campaign.

Her complaint says that she was the only woman with that title and that men with the same title were also paid more.

In an interview, Ms. Davidson said she was paid $2,000 a month and was classified as a part-time worker because she also had a job as a paralegal. But she said another field representative, Marc Elcock, was paid more despite the fact that he, too, has a day job, as a lawyer.

According to the Trump campaign’s public filings, several men who held the title of district representative, including Mr. Elcock, were paid $3,500 to $4,000 a month.

Mr. Trump’s remark to Ms. Davidson and a female volunteer that they could “do a lot of damage” occurred when they were introduced to Mr. Trump last summer, according to the complaint, which included no other details about the exchange. 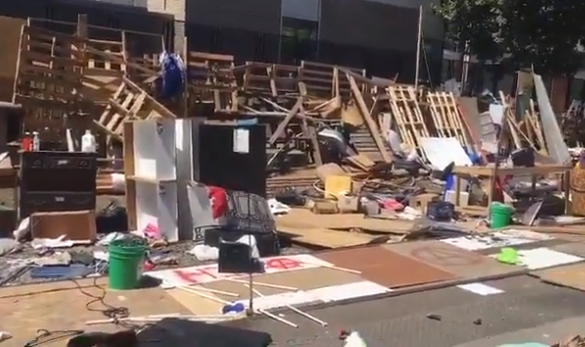