Initial reports from the mass shooting at Marjory Stoneman Douglas High School in Parkland, said that the armed Florida School Deputy, Scot Peterson, was across campus when the situation went down. That was not the case. Turns out that he “took up a position” outside the door, but never went in, according to WFSB. He was suspended without pay, but has since resigned.

Students saw the Deputy just standing around the day of the shooting. 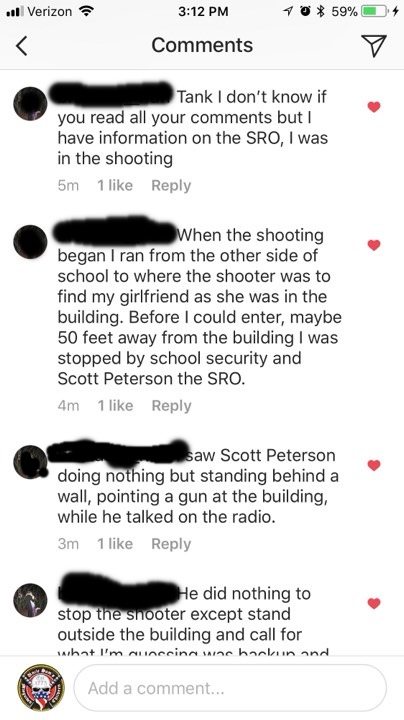 Could the entire incident have been stopped if just one armed person had engaged the shooter and done his job??  When surveillance video was reviewed, it showed Scot Peterson standing outside the door for about 4 minutes. He never entered Building 12 where the shooting took place, and did not fire his weapon. Four minutes was critical time in a shooting that lasted for six.

“What matters is that when we, in law enforcement, arrive at an active shooter, we go in and address the target. And that’s what should’ve been done.”  Sheriff Scott Israel

Peterson was armed and in uniform during the shooting, but never entered the building despite “clearly” knowing a shooting was happening, Israel said.

The sheriff said he believes Peterson remained outside of the building for four minutes, while the shooting in total lasted six minutes. Israel said the officer never fired his weapon.

Israel said he’s “devastated. Sick to my stomach. There are no words.”

The whole purpose of law enforcement is to intervene to save others. By standing outside the building where students were being killed, Peterson made all of us ‘sick to our stomach.’ What was he thinking? Was he hiding because he was afraid? All law enforcement officers are afraid at one time or another during their careers, but they have to overcome the innate fear to do their jobs.

Peterson had been “School Resource Officer of the Year” in 2014. But counseling students and handling teenager drama is far different than being in an active shooter situation.

Two other deputies have been placed on restrictive duty as internal investigations try to determine whether previous encounters with Nikolas Cruz might have been handled differently, or whether standard protocols were not followed. Broward County Sheriff’s Department had responded to 23 calls regarding Nikolas Cruz or his brother since 2008.

Update: Peterson’s home is being guarded by police officers to protect his house. Please note that  his name has been corrected to reflect the proper spelling. This is NOT the same person as the infamous Scott Peterson from previous years.