An official of a little-known environmental panel in Florida resigned on Wednesday after vile comments in which she called a US Army veteran a traitor and spoke ill of fallen veterans became public.

Task and Purpose reported that Patricia “Pat” Edmonson, a Democrat, who until Wednesday afternoon served on the Palm Beach Soil and Water Conservation District, and U.S. Army veteran James Plowman, who lives in North Carolina, didn’t know each other before they met in cyberspace through a discussion on Facebook on July 16.

The two sparred over a Facebook post by another user regarding President Donald Trump’s meeting with Vladimir Putin. After Plowman mentioned the years he spent in combat, Edmonson, wrote using an expletive, “—— you, traitor.”

Edmonson then launched into a vitriolic tirade of posts. “Do your dead brothers ever visit your dreams and ask you why you’ve turned your back on them?” she wrote. She also asked:“Do you smell the rotting flesh of those you’ve betrayed?”

Reached on Wednesday, Plowman said he isn’t concerned about being called a traitor. That’s comical to him, he said. But the comments she made about soldiers killed in battle “just can’t be forgiven,” Plowman said.

“That’s just something I’m not going to even look at forgiving. It’s just not a place she should have ever went,” he said.

On Plowman’s Facebook page, Edmonson wrote that she appreciated Plowman’s service to the country and apologized for “the inappropriate choice of language” by calling him a “traitor.” 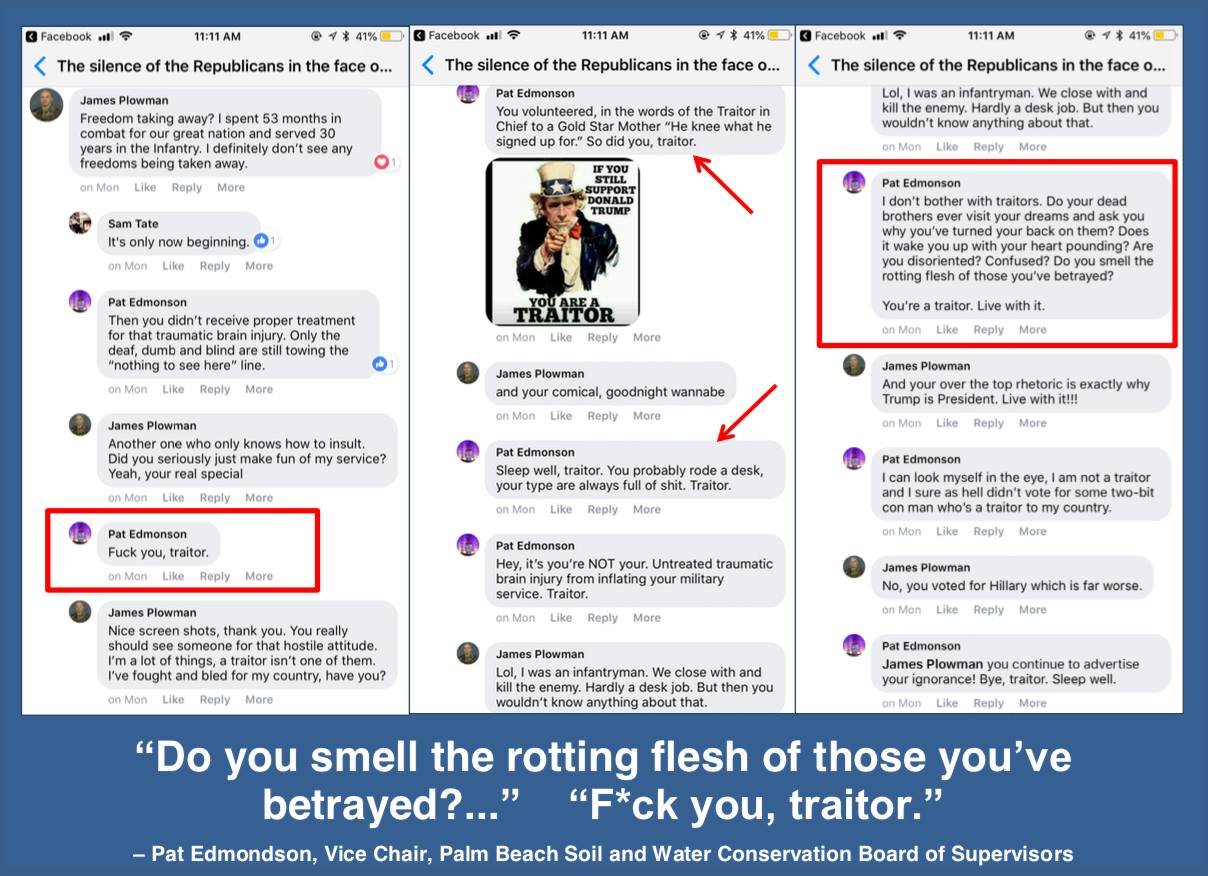 “My words were spoken as a private citizen, not in any professional or public capacity and should be treated accordingly,” she wrote. She also added her role in the exchange wasn’t “her finest hour” and she “let my Trump hate get the best of me and said some truly hurtful things.”

Edmonson was elected to the Palm Beach Soil and Water Conservation District in 2016 and won a new term in June when she ran again but unopposed.

Plowman responded and stated on his Facebook page, “As this is out there now on social media I might as well share it with my friends. As everyone here knows I have strong political views and I’m very conservative in those views. This started as a comment on a post referencing all Trump supporters should be treated as common criminals. I replied that the post was over the top. And then, of course, you can see this Pat Edmondson’s comments who is actually an elected official in Florida. My wife Summer Plowman saw me discussing it with another friend and I showed it to her. Naturally, she said it wasn’t right and she was going to report it to the Florida authorities. And here we are.”

Michael Barnett, Chairman of the Republican Party of Palm Beach County responded to statements of Edmonson and said:

“A local elected official from the Palm Beach Soil and Water Conservation Board of Supervisors viciously attacked a US military veteran using derogatory, divisive, and unprofessional language on social media; that elected official is Vice Chair Patricia “Pat” Edmondson. Such behavior by a public official cannot be tolerated.

Differences in political opinion should be discussed with more diplomacy and mutual respect than Ms. Edmondson displayed towards Mr. James Plowman, a military veteran. In her public dialogue with Mr. Plowman, Ms. Edmondson belittled him, calling him a “traitor” several times, cursed at him using the f-word, and insulted his service by suggesting that he “didn’t receive proper treatment for that traumatic brain injury.”

No one, whether a veteran or a private citizen, should ever be treated so contemptuously by an elected official.

We condemn in the strongest possible terms Ms. Edmondson’s assault on a retired member of our armed forces and call for her immediate resignation from the Palm Beach Soil and Water Conservation Board of Supervisors. We also call upon local leaders to disavow Ms. Edmondson and her shameful comments, which amazingly as of today still have not been taken down. In addition, Ms. Edmonson should apologize to all veterans who have faithfully served this country – the men and women who sacrificed so much deserve better.”

More at Task and Purpose.

If you haven’t checked out and liked our Facebook page, please go here and do so. And be sure to check out our new page here.