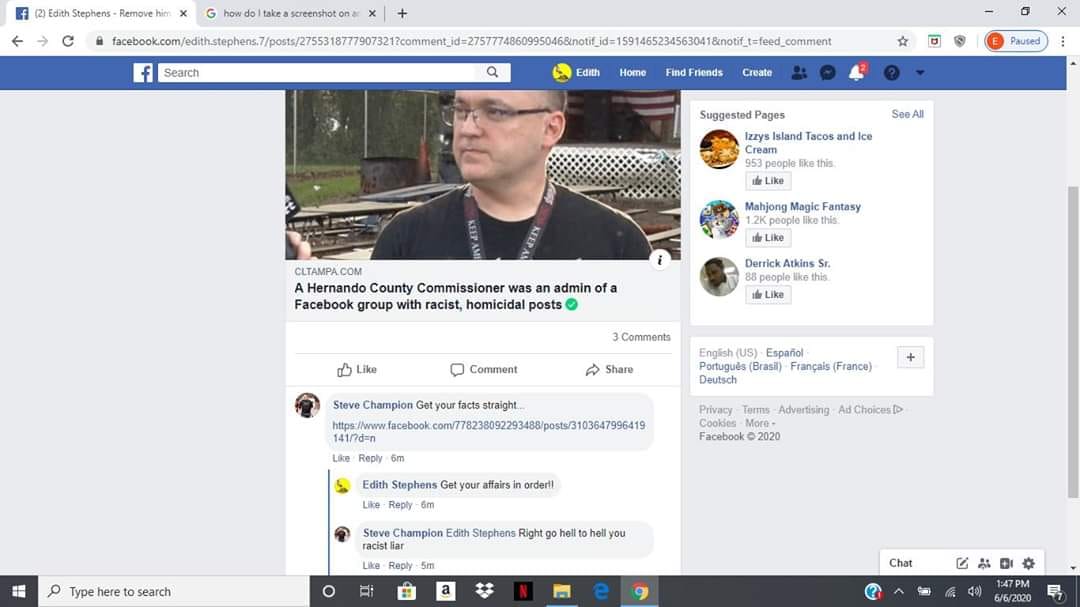 “Go to hell, you racist liar.” That was the response of Hernando County Commissioner Steve Champion to an angry constituent after being told to “get his affairs in order.” In the wake of several social media and public Board of County Commissioner meeting missteps, a growing number of voters believe the Florida County Commissioner has a racist/anger management problem.

The comments followed a post of a June 5 article by Christopher Cann for Creative Loafing Tampa (CLTampa) regarding a private Facebook group called “Defend Hernando County.” 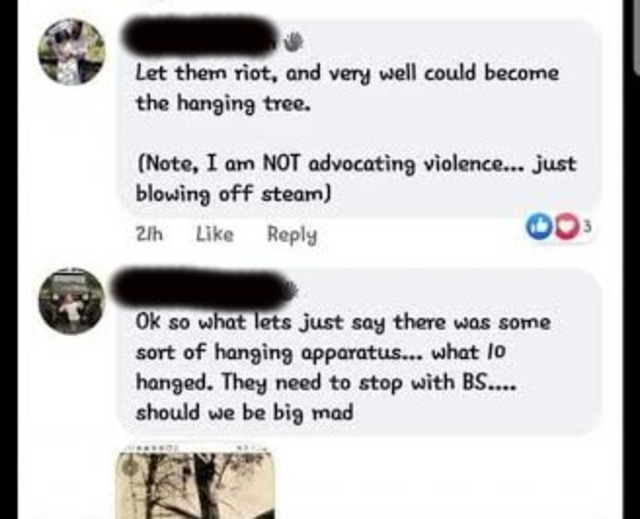 “Let them riot and very well could become a hanging tree,” one member posted.

“Start shooting them,” another member wrote, “Give a warning then start.”

“I like let’s shoot first,” replied another member, “then if there alive we will warn them for next time.”

Among the captured posts were screenshots of the groups’ administrators and moderators. Champion’s name was on that list. 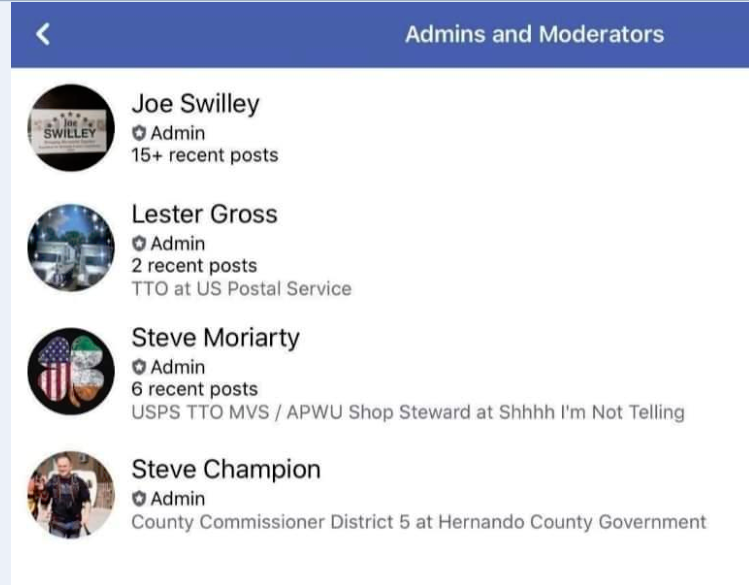 When confronted, Champion posted a lengthy statement of self-exoneration on yet another of his Facebook pages, “Champion 4 Hernando Commissioner.”

“The far left liberals are hard at work again trying to trash me and the people on the page Defend Hernando County,” the rant began. “Originally, I proudly joined this page based on the premise that people of Hernando County will join together to protect our HOME against violent criminals ( like the ones in Tampa Looting and burning buildings ) no one had any intention of violence or racial comments.”

“Crime Analysts and Deputies continue to monitor social media,” the press release issued June 3 by the Hernando County Sheriff’s Office read in part, “asking all PAGE MODERATORS to closely monitor all posts and to remove any post where the information has not been verified or is perpetuating violence.”

“Since the page grew and someone added me as an administrator (without my permission),” Champion insisted, “I was never active in administrating the page. Then a few inappropriate comments were made and I left the page. I’m sure the leadership will clean up the few bad apples on the page.” 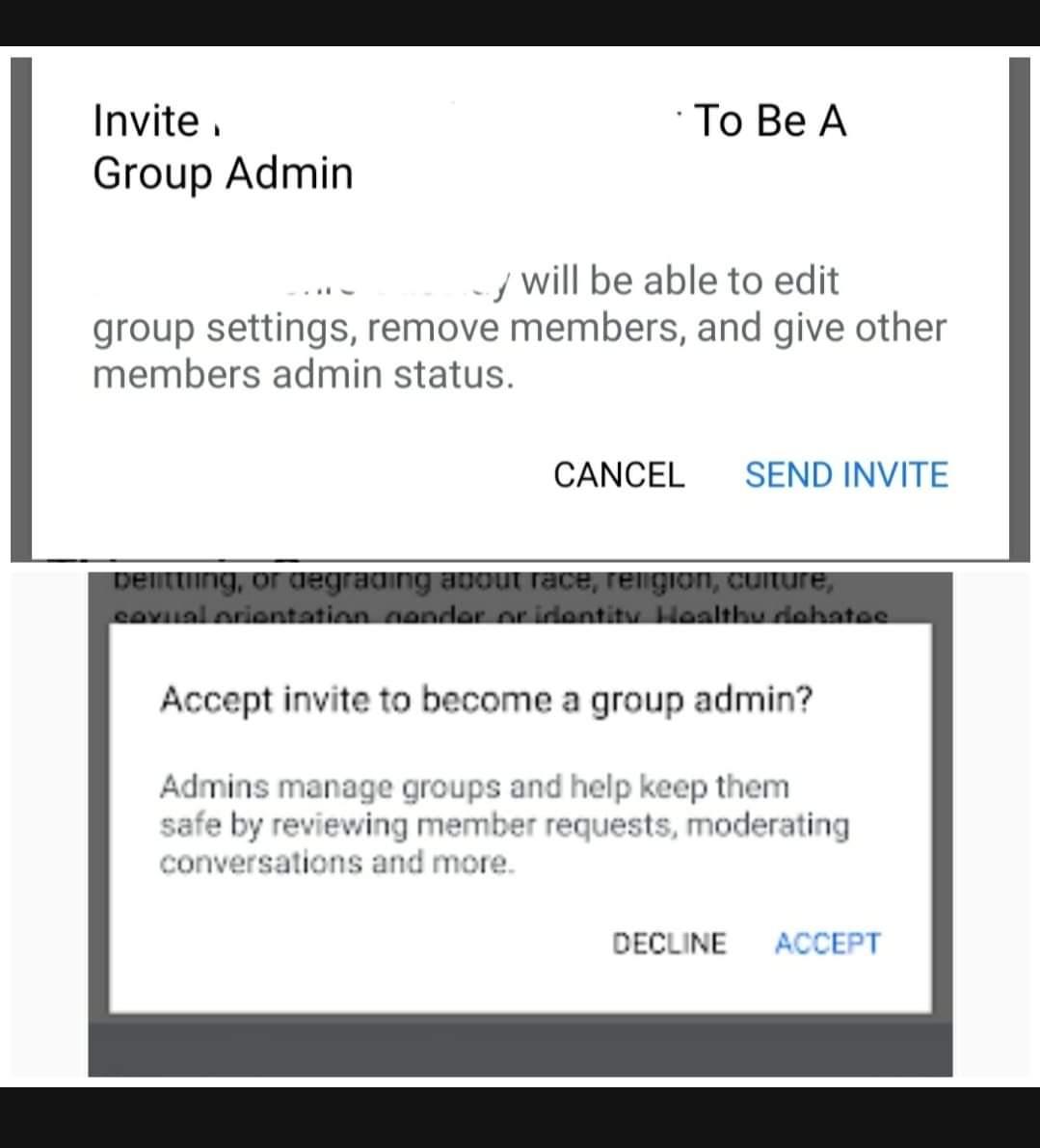 That Champion attempts to absolve himself of accountability for allowing the “inappropriate comments” made on the page to remain by saying he “left the page,” is cowardly.

That he passed responsibility for the incendiary comments on a Facebook Group to others — saying “the leadership will clean up the few bad apples” — sheds serious doubt on his ability to be in a “leadership” role for Hernando County.

The group, which has since been hidden, had at least 2,600 members. 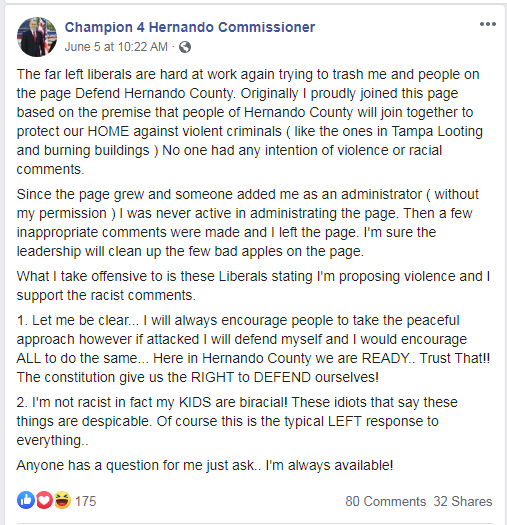 Unfortunately, Defending Hernando County was not the only controversial private Facebook Group to which Champion associated himself.

Another private Facebook Group — Hernando 2nd Amendment Club — created by Champion to promote his business American Gun and Pawn and his political ambitions — is also laced with racially charged posts. 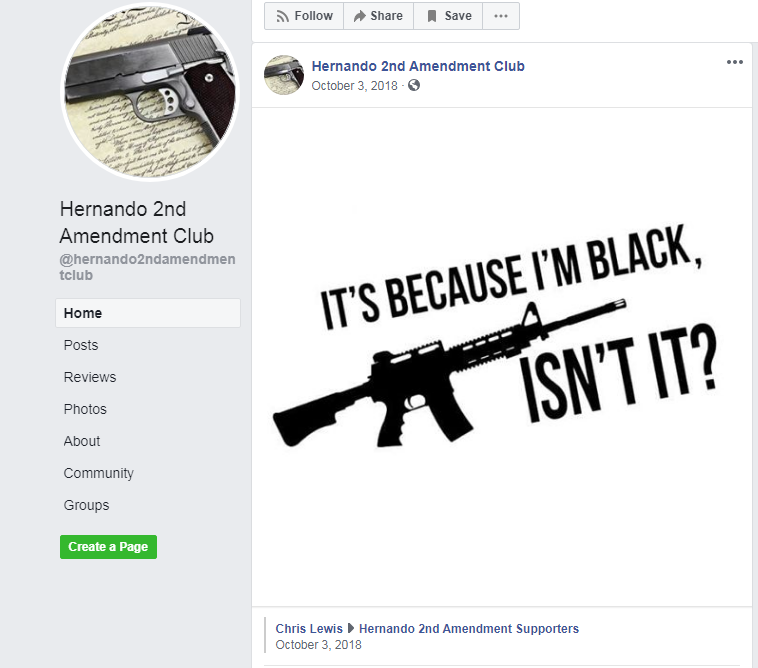 One post shows the silhouette of an assault-style weapon – a weapon long opposed by anti-gun advocates — with the racially charged insinuation that color was the real reason why some oppose the weapon.

In another post, viewable only by a select few, another member makes his intentions quite clear.

“I post this just for the joy of offending people,” he boasts.

“So is this part of Hernando County Government?” Asked one constituent named Charlotte Zaengler. “Are my tax dollars going to this club?”

“Thank you for the speedy response,” the constituent responded with sarcasm. “I asked this since I noticed it has the County’s seal. Thank you.”

From here, an unknown Hernando 2nd Amendment “Author” took over the conversation, informing Zaengle that, “the seal belongs to all of us.”

“And it’s an old one,” the unknown “Author” added.

“Old one, new one doesn’t matter,” the Zaengle countered. “If this is a private club it shouldn’t carry the County’s seal. That is a bit misleading. But thank you for your response.” 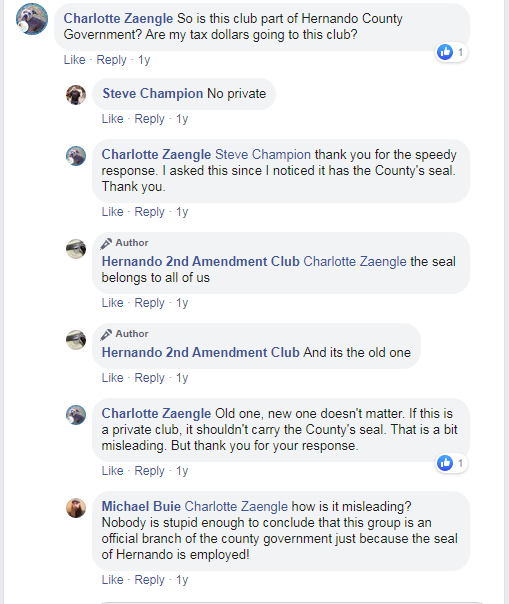 According to Suffolk EDU, regarding The Public Usage of State Government Logo and Seal, “individuals or companies are not allowed to use state agencies’ logos for any purposes, except as specifically provided by license, signed agreement, or other written permission.

The County Seal has since been removed from the page.

In yet another controversy, Champion made the extraordinary suggestion at a morning BOCC meeting that the Florida State Sunshine Laws – designed to ensure transparency — were too restrictive for local government. He announced that he did not understand why he couldn’t just sit down and discuss things with other commissioners in private.

“These laws are important,” Dorothy Famiano reported in August 2019 for the Hernando Phoenix, “because they ensure a minimum amount of transparency as private owned business participate in business dealings with the government or government agencies participate in regulatory processes.

While this endeavor –albeit questionable – might, at first glance seem innocuous, it becomes considerably more suspicious when paired with another effort Champion was pushing around the same time.

Coincidentally, Champion and some other commissioners were pushing for a long-range shooting area as part of their Adventure Coast tourism campaign.

As Barbara Behrendt reported November 20, 2019 by The Tampa Bay Times, “the Withlacoochee State Forest might serve as the perfect spot, they figured.”

“Champion said he had hoped to build an indoor range on property that he owns,” Behrendt noted further, “but the $2 million investment was out of reach.”

As Behrendt reported June 11, 2019 for the Tampa Bay Times, the gun range idea was proposed by Champion after he learned federal funding would be available.

“The federal program provides 90 percent funding of such facilities from money collected from excise taxes from the sale of firearms and ammunition,” Behrendt noted.

Champion, the owner of American Gun and Pawn in Brooksville, was called out for what could appear to be a self-serving project.

“Commissioner Champion on many occasions at events being introduced as Commissioner Champion has no problem promoting his gun shop business,” he wrote in an email to county attorney Garth Coller. “That for one is very unethical as public official using his position to benefit his business for financial gain.”

Remarkably, Coller insisted there would be no personal gain for Champion, who owns a gun shop, where people using the proposed nearby shooting range would likely purchase firearms and ammunition. Therefore, Champion would be allowed to vote on the measure.

Against Champion’s efforts to promote the shooting range, expensive logistics foiled his plans.

As noted by Hernando County’s economic development director, Valerie Pianta, further research indicated a number of costly conditions would have to be met.

Champion said he thought that partnering with The Sportsmans Club might have been an option.

But no commissioner pushed to do anything else with the gun range idea. Was this the reason why Champion wanted secrecy? So he could speak in private to other board members to solicit their support for a project that would likely draw business to his gun shop?

In yet another scandalous move, when an angry resident appeared before the BOCC seeking a way to get rid of his dog, Champion actually advised “it is legal to shoot your dog in a humane way if it is causing harm or damage to property.”

Backlash among the tight-knit and dedicated group of people in Hernando County’s animal community was immediate. A Facebook Fundraiser page was created to help save Toby and to make Champion’s appalling comments public.

“I gave examples of defending human life or property from a dangerous animal,” Champion later told Fox13 News. “I own animals myself and, of course, I was not advocating to just harm or kill animals.”

How Champion believes telling an angry man that “it’s legal to shoot your dog in a humane way if it is causing harm or damage to property” is “not advocating to just harm or kill animals” is unclear.

However, according to Florida State statute 828.058:

(4)(a) Euthanasia shall be performed only by a licensed veterinarian or an employee or agent of a public or private agency, animal shelter, or other facility that is operated for the collection and care of stray, neglected, abandoned, or unwanted animals, provided the employee or agent has successfully completed a 16-hour euthanasia technician certification course.

The state attorney may bring an action to enjoin any violation of this act.

As further reported by Fox13 News, the Hernando County Sheriff’s Office said a complaint of euthanasia by gunshot would start an investigation for animal cruelty.

Champion has a habit of insulting and blocking people who take umbrage with his behavior and insults. As Jack Evans reported July 26, 2019 for the Tampa Bay Times, Champion admits to having blocked “a couple of dozen” constituents who have commented on his posts.

However, a “District Court judge ruled last August that the Washington County Clerk of Court’s office violated the First Amendment when it deleted comments and blocked access to its Facebook page.”

“To tell you the truth, I don’t care what anybody thinks,” Champion said of the negative comments and advice that he stop restricting the 1st Amendment rights of his constituents. “Tell them to make me.”

While claiming not to “care what anyone thinks,” Champion is quick to insult anyone who thinks less than he would like of him.

Detwiler added that Champion “stoops so low as to making fun of a candidate’s sexuality,” and that he “publicly defamed and lied about a respected council member by calling them a ‘felon’ when they questioned his actions.”

Indeed. As Dorothy Famiano reported for Hernando Phoenix Aug 25, 2019, “Champion went off the deep end,” potential commission seat challenger Brooksville City Councilwoman Betty Erhard questioned his efforts to abolish Florida’s Sunshine laws.” when even going so far as to falsely accuse her of being a convicted felon.

“He then publicly threatened her for asking questions by threatening to publish a booking photo from years ago when Erhard was arrested for paying bills from a marital bank account.  The allegations were made by Erhard’s former husband of 20 years during a contentious divorce while Erhard was fighting stage III cancer. The matter was rectified and those records were expunged.”

“Why would any elected official, a civil servant elected by the people to represent the people want to take away the people’s constitutional rights?,” Erhard asked. “We need more transparency. Why abolish Florida’s Sunshine laws? More back door deals? What has he done for his district? What positive changes has he done for the County? Shouldn’t he be more concerned about the county’s deficit?”

“Steve Champion has been a rogue, unstable embarrassment of a county commissioner,” Detwiler concluded, “who bashes his own Republican party members.”

“He has continued to abuse his position for his own financial gain, by promoting his personal business as the county commissioner, and using his business to promote his re-election using fear tactics.”

“We’re all in this together to create a welcoming environment,” reads the rules established by the administrators of Hernando 2nd Amendment Supporters, a sister-group to Hernando 2nd Amendment Club and another of Champion’s many Facebook Group pages. “Let’s treat everyone with respect. Healthy debates are natural, but kindness is required.”

On June 5, Karen Langly, a member of Change.org,  started a petition to remove Champion from office.

Efforts to obtain comment from Champion regarding the allegations presented in this story received no response.