The five Taliban members who were exchanged for Bowe Bergdahl are now in the Taliban political office in Qatar. Why? Because they will be the ones “negotiating” for peace in Afghanistan. You can’t make this stuff up. 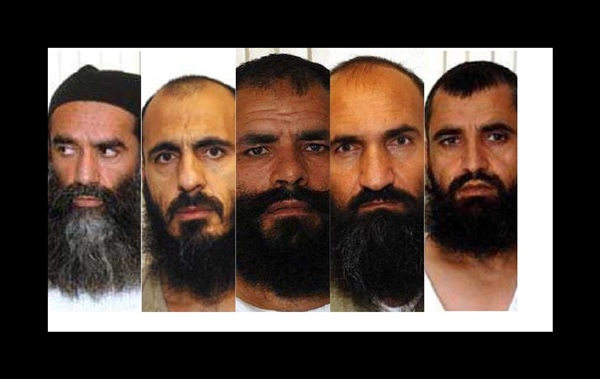 They will now be among Taliban representatives negotiating for peace in Afghanistan, a sign some negotiators in Kabul say indicates the Taliban’s desire for a peace pact.

Others fear the five, all of whom were close to the insurgent group’s founder and hard-line leader Mullah Mohammed Omar, bring with them the same ultra-conservative interpretation of Islam that characterized the group’s five-year rule that ended in 2001 with the U.S.-led invasion.

“The Taliban are bringing back their old generation, which means the Taliban have not changed their thinking or their leadership,” said Haroun Mir, political analyst in the Afghan capital. “What we are more worried about is if tomorrow the Taliban say ‘we are ready to negotiate,’ who will represent Kabul? That is the big challenge because the government is so divided, not just ideologically but on ethnic lines.”

At a time when Afghanistan is seriously divided (sounds familiar, doesn’t it?), in comes the Taliban’s old hardliner leadership to “negotiate” a peace plan. Thus far, the terrorist group has consistently refused to meet directly with the Afghan government because they view them as a “puppet” of the United States.

Meanwhile, they have continued to attack regions of Afghanistan, killing hundreds of their own citizens, and American service members.

In September, Afghan-American Zalmay Khalilzad was appointed as a US envoy to attempt to set up direct talks between the Taliban and the Afghan government. He was the US Ambassador to Iraq and Afghanistan, and the UN ambassador during the George W Bush administration, according to NPR.

But with Taliban hardliners now in place as “negotiators,” that may prove difficult. There have been meetings set up with the US in Qatar, but the US hasn’t acknowledged them, according to Military Times. Let’s talk reality here: “negotiating” with terrorists is unlikely to bring about “peace” in any form. They’d rather commit murder than yell and scream at people across a table.