According to a recently-released FBI document, a group at the State Department calling itself the “Shadow Government” oversaw everything related to Democrat Hillary Clinton, perhaps the most evil person ever nominated to the White House by a major party.

On page 56 of the FBI document, which can be seen here, one finds this: 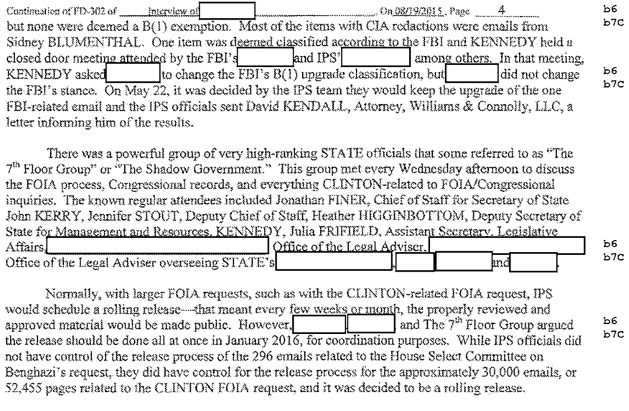 “There was a powerful group of very high ranking STATE officials that some referred to as “The 7th Floor Group” or “The Shadow Government.” This group met every Wednesday afternoon to discuss the FOIA process, Congressional records and everything CLINTON-related to FOIA/Congressional inquiries,” the document reads.

This group met every Wednesday, the document says, and included Secretary of State John Kerry and other high-ranking State Department officials.

The revelation that there is a group literally known as “the shadow government” within the State Department, proven by FBI documents, is going to be hard for the mainstream media to dismiss as another “tin foil hat” conspiracy theory.

“Pretty much this, I mean i knew sh*t was bad, but I had no idea it was THIS bad,” wrote one.

“Man, my head might explode if we get the names of the shadow government. This is truly a time of the world when everything is bananas. I’m glad I’m here to see it, it’s really interesting,” added another.

Normally, my eyes tend to glaze over when I hear people referring to a “shadow government.”  But this revelation is quite disturbing.  Is the State Department acting as its own “government?”

The document goes on to say that high-ranking officials at Foggy Bottom used a separate system for emails and record-keeping that was not used by a vast majority of employees at the department.  The heavily-redacted document also indicates the NSA may have set up a server for Clinton.

“Additionally,” the document says on page 57, “Additionally, the FBI should ask S/ES about Jake SULLIVAN’s email being hacked, as maybe that had something to do with CLINTON’s emails or why the NSA set-up her computer.”

Clearly, we have not been told the full story about Clinton’s email server.

Chet Hanks no longer an Atheist!
March 7th, 2021 The Real Side With Joe Messina