Dr. Anthony Fauci has flip-flopped on his opinion on the possible origin of the virus just as more experts have come forward saying that the lab leak theory is plausible.

He is calling for further investigation into the origin of the coronavirus that originated in the shadow of a virology lab studying bat coronaviruses in Wuhan, China in late 2019.

This is a pretty big about-face from his position for the past year which was an outright dismissal of the idea that the virus originated in the virology lab in Wuhan.

In an interview with PolitiFact on May 11, Saint Fauci talks about his rhetorical tangle with Senator Rand Paul (R-KY) during a Senate hearing on the origin of the coronavirus.

During the interview, Katie Sanders asks Dr. Fauci if he is still confident that the virus developed naturally.

His response is, “No, actually. No, I’m not convinced about that. I think that we should continue to investigate what went on in China until we find out to the best of our ability exactly what happened. Certainly, the people who’ve investigated it say it likely was the emergence from an animal reservoir that then infected individuals, but it could’ve been something else, and we need to find that out. So, you know, that’s the reason why I said I’m perfectly in favor of any investigation that looks into the origin of the virus.”

With the lab-leak theory becoming mainstream in U.S. and elsewhere, Dr. Anthony Fauci (who funded dangerous lab research in Wuhan) flip-flops. Asked by PolitiFact, "Are you still confident the virus developed naturally," he replies, "No, I'm not convinced" virus arose naturally. pic.twitter.com/a9oIRr7h8p

It’s amazing he didn’t get dizzy and fall over with that rapid turn-around!

In case you want to see the context, here is the full interview with PolitiFact’s Katie Sanders:

The prevaricating authoritarian Smurf has been shifting his positions constantly throughout the past year, and often it had nothing to do with The Science™ at all. But hey, it’s kept him in the public eye for a year now.

There have been many scientists from all over the world that have raised questions about the origin of the virus especially since there was a virology institute in Wuhan that specifically studied bat coronaviruses. Officials in both the Trump and Biden administrations have said that the Chinese government prevented an investigation into the origins for an entire year. Documents and samples had been destroyed, and the Chinese government had a hand in who was investigating, and what they looked at, and essentially led the “investigators” to the results that they wanted. And even then, China was uncooperative.

AP Report: Draft Of Joint Investigation By WHO And The CCP Says That COVID Did NOT Come From A Lab

The results of the WHO investigation conflict with declassified U.S. intelligence documents and the intelligence from Five Eyes.

In April 2020, while China was pushing disinformation that the virus was brought to China from the U.S. military or frozen fish, it was reported that the likely source was an accidental lab leak.

Later, in January 2021, the State Department released a fact-sheet with some pretty damning evidence detailing that the Wuhan Institute of Virology was involved in gain-of-function research in order to engineer chimeric viruses and “conducted experiments involving RaTG13, the bat coronavirus identified by the WIV in January 2020 as its closest sample to SARS-CoV-2 (96.2% similar).” The fact sheet also notes that the Wuhan lab “has engaged in classified research, including laboratory animal experiments, on behalf of the Chinese military.”

Early in the pandemic, ClashDaily published an article with a fascinating video by an investigative journalist on the possible origin of the coronavirus citing medical experts that cited much of what was in that State Department fact-sheet. We just published it on April 16, 2020 — a full 9 months before the State Department. Of course, we have been classified as “dangerous and derogatory” information by ad-hosting sites, and “disinformation” by so-called “fact-checkers.”

Speaking of so-called “fact-checkers,” PolitiFact, the same people who conducted the interview with Fauci on May 11, updated their “fact check” on Tucker Carlson’s show when his guest, virologist Li-Meng Yan said that the virus was “intentionally released” from the Wuhan lab. 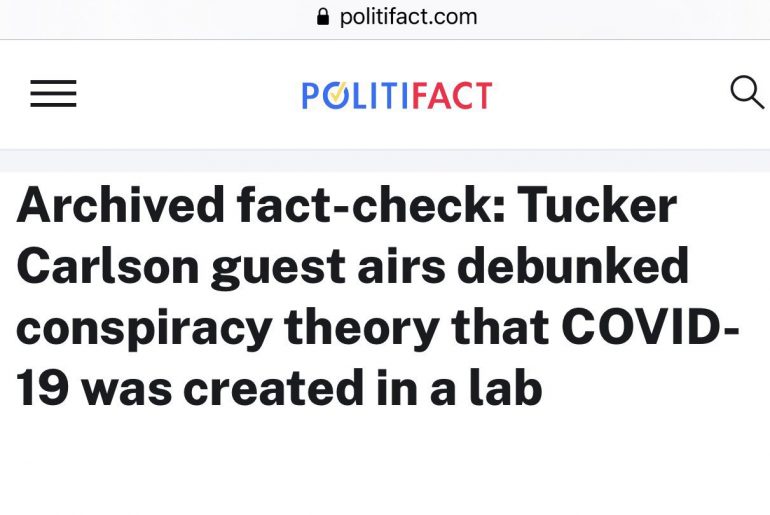 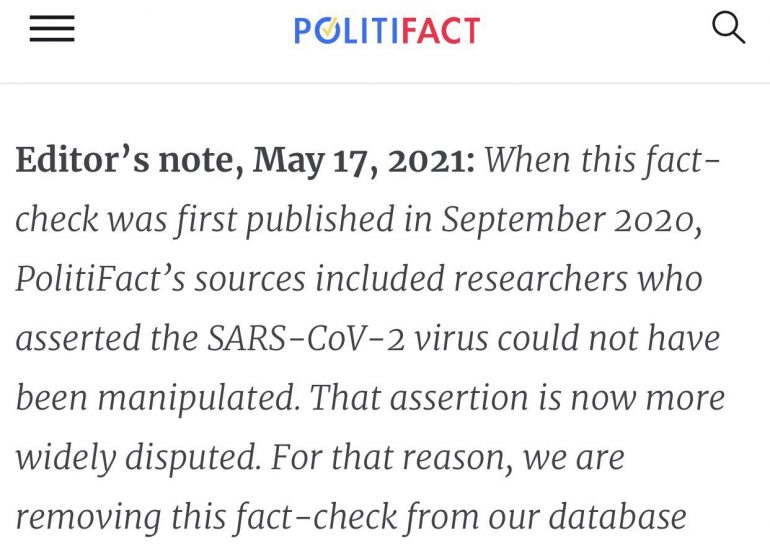 Oh, would you look at that — they were wrong!

But they get to just say “oopsie!” and it’s just fine — pay no attention to the people who are discredited and kicked off of social media for saying what the science now says.

Let’s be perfectly clear here, Dr. Fauci has done a complete 180 on what he said for the past year. If he said what he’s saying now back in March 2020, PolitiFact would call him a “conspiracy theorist” but back then, Fauci and the Corporate Media were on the same page that it just couldn’t have possibly been a lab leak.

Dr. Fauci said in January 2021 that COVID-19 could have started in the wet market in Wuhan. (As a bonus, a bit earlier he talks about masking after vaccination which he now admits is not necessary.)

And finally, here’s what Dr. Fauci said in the March 2020 interview with National Geographic:

NAT. GEO.: One topic in the news lately has been the origins of SAR-CoV-2. Do you believe or is there evidence that the virus was made in the lab in China or accidentally released from a lab in China?

FAUCI: If you look at the evolution of the virus in bats, and what’s out there now is very, very strongly leaning toward this [virus] could not have been artificially or deliberately manipulated—the way the mutations have naturally evolved. A number of very qualified evolutionary biologists have said that everything about the stepwise evolution over time strongly indicates that it evolved in nature and then jumped species.

NAT. GEO.: Sure, but what if scientists found the virus outside the lab, brought it back, and then it escaped?

FAUCI: But that means it was in the wild to begin with. That’s why I don’t get what they’re talking about [and] why I don’t spend a lot of time going in on this circular argument.

So, when does Fauci get “fact-checked”? When does he get called out on MSNBCNN for his misleading statements?