On Saturday, Rich Penkoski, pastor of the online Christian ministry Warriors for Christ, said Facebook, the social media giant once dubbed “Iron FistBook” by political cartoonist A.F. Branco, told him and others that a post advocating the murder of white people does not violate their community standards.

“Please Kill white people only,” the Facebook user said, according to the screenshot Penkoski sent. 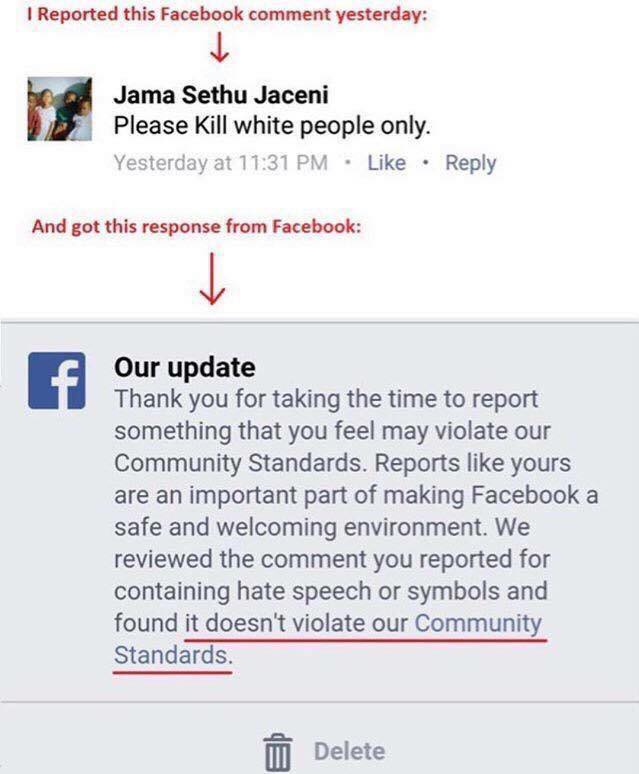 According to Penkoski, the post was placed in a Christian group he follows and was reported by several other users, who got the same response.  What makes this outrageous is that the post clearly violates Facebook’s standards on hate speech.

Keep in mind this is the same social media outlet that recently backtracked after saying a part of the Declaration of Independence violates its standard on hate speech.

The site also told one user her profile picture of a lilac tree was pornographic and said a 2012 Trump campaign button violated its rules on nudity.

Penkoski, as we’ve reported several times in recent months, has found himself to be the target of Facebook’s Orwellian enforcement, which has allowed LGBT activists to target and harass him and members of his staff and family while repeatedly tearing down his pages for questionable reasons.

Incidents like this, by the way, were the inspiration for “Banned: How Facebook Enables Militant Islamic Jihad,” a book co-authored by myself and American-Israeli Adina Kutnicki.