On Monday, a post at Young Conservatives observed that Democrat Hillary Clinton needed help climbing the stairs at a campaign rally at Temple University.  But, the Gateway Pundit said Tuesday, Facebook told one user the link to the article violated their community standards: 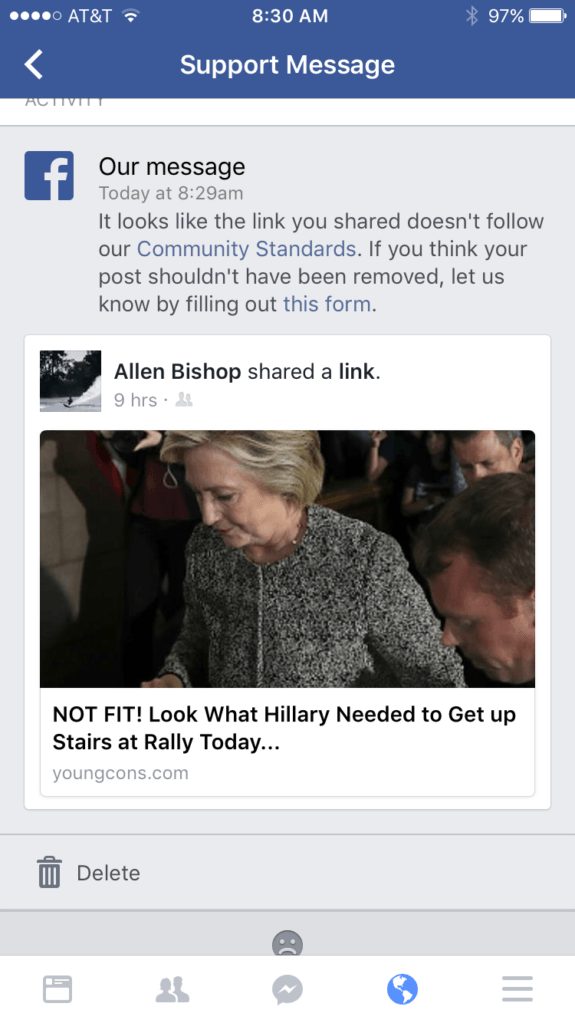 We took a look at the article, and found nothing that violated the social media site’s standards.

“Did anyone else get this message?” Jim Hoft asked.  “And is Facebook pulling down articles on Sick Hillary?”

It appears she was campaigning inside a wine cellar given how small the room looks.

That wasn’t the worst part, though.

Grandma couldn’t even make it up the stairs herself.

Obviously we’ve seen her need help before, but with the fainting incident on 9/11 you’d think she’d avoid these kind of situations.

Keep in mind that the site increasingly known as the world’s most dangerous censor is now helping to decide what questions will be asked at the presidential debates starting this month.

As Lisa Payne-Naeger wrote, “…Zuckerberg was the center of a controversy when he was overheard as affirming, to none other than Angela Merkel, that he would use his social media empire to distort media promotion in order to favor the refugee influx into foreign countries, including America.”

And we’re supposed to trust that they’ll be objective?  Really?

Incidents like this, by the way, are the reason Adina Kutnicki, an invastigative journalist based in Israel, and I wrote “Banned: How Facebook enables militant Islamic jihad.”  That book, endorsed by Pamela Geller, is now available and can be purchased here and here.

Mainstream Media: Flu Has Disappeared – We Know It’s Because Of The COVID Fraud
February 25th, 2021 Sons of Liberty Media

Extremists Plotting to ‘Blow Up’ the Capitol During State of The Union
February 25th, 2021 Liberty Hub
Tweets by Conservative Firing Line