Hundreds of text messages between two FBI officials blasting President Donald Trump that were released overnight ahead of a House Judiciary Committee hearing Wednesday amount to a political bombshell that could taint, if not derail, the so-called “Trump-Russia” investigation.

The texts, between agent Peter Strzok and FBI attorney Lisa Page, portray Trump as “loathsome” and “an idiot,” according to Fox News.

The House Judiciary Hearing, with Deputy Attorney General Rod Rosenstein, was suddenly expected to be loaded with political fireworks, and it was not disappointing. Rosenstein, who appointed Mueller, said there is no reason to remove Mueller from the probe.

According to Zero Hedge, more than 10,000 text messages were turned over to Congress Tuesday evening. They were “promptly leaked to the press,” the report noted.

Both Strzok and Page were working on the Clinton email investigation when they exchanged the text messages, according to published reports. Both were dismissed from Robert Mueller’s Russia investigation.

Release of the text messages came as a different political eruption was unfolding in Alabama with the narrow victory of Democrat Doug Jones over Republican Roy Moore in the special election to fill the seat of former Sen. Jeff Sessions. Ironically, Sessions is now Attorney General.

The Daily Mail reported that the Moore loss had left the White House “shell-shocked.” Finger pointing has already begun, with blame being aimed at former Trump advisor Steve Bannon, the GOP “establishment,” the media and Moore, himself.

Moore’s campaign was irreparably damaged by allegations of sexual improprieties in his past.

But the Moore defeat may take back seat to this text messaging revelation. In one exchange quoted by Fox News, Page wrote to Strzok that “Trump should go f himself.” Fox News reporter Shannon Bream was busy on Twitter Tuesday night, quoting excerpts of the text messages. 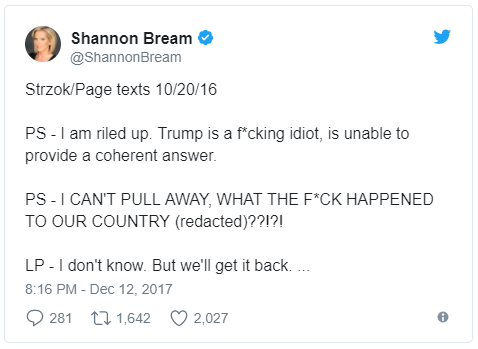 Almost from the beginning, Mueller’s investigation has been clouded with controversy over some of the people on his investigative team. Release of the text messages can only reinforce that criticism.

During Wednesday’s Judiciary hearing, Congressman Jim Jordan (R-OH), asserted that the texts had undermined public trust in the investigation.

Health Is Important In The Kingdom With Jason Garwood
April 20th, 2021 Sons of Liberty Media