Jared Fogle went from a 425 pound college student to a 175 pound multi-millionaire hawking sub sandwiches for a restaurant chain. Now the same Jared Fogle may not have to worry about putting all that weight back on, especially on his new regimen of prison food and avoiding beat downs in the yard of the Federal Correctional Institution, Englewood in Colorado.

As reported by the Reuters news service (via the MSN network) on Mar. 16, 2016, the former Subway sub shop adman and cultural icon turned convicted pedophile took quite the beating that resulted in a bloody nose, his entire face swollen and scratches on his neck. According to the Heavy.com news portal, also on Mar. 16, 2016, the inmate punished for meting our prison justice to Fogle was a rather hulking 60-year-old named Steven Nigg.

With his estimated worth at $15 million, Fogle apparently had anything a man could ask for. That is before being sentenced to 15 years and eight months in federal prison on various sex crimes charges. He pleaded guilty in November of 2015 to charges of child pornography and traveling for illicit paid sex with minors. Fogel had previously admitted to traveling to New York on at least two occasions to pay to have sex with minors.

The sandwich salesman may have had the world at his feet, but that didn’t deter him from drowning in a pit of depravity and self-destruction. According to Professor John Bradford, a University of Ottawa forensic psychiatrist considered an expert in sexual deviance, Fogel was merely a “mild” pedophile who also was in the habit of dropping “at least” $12,000 a year on prostitutes.

Meanwhile, back in the Englewood hoosegow, prison officials investigated for two hours and determined Nigg was the perpetrator of Fogle’s injuries. However, Nigg’s nephew, Jimmy Nigg, told Heavy.com (cited and linted to above) via email regarding his Uncle Steven, “In his words they were sending child molesters there for a program that did not work and let the molesters off with out serving hard time.” Jimmy also stated in his correspondence, “He wanted the public to know that these molesters were being sent to their backyard, just feet from schools and homes.”

He said Fogle arrived at the Colorado prison and immediately began “flaunting his money,” using it for extra food and paid bodyguards. In the wake of the Fogle beating, Steven told his family he wanted everyone to know “he did it for the victims and their families.”

Steven Nigg was sentenced in 2011 to 15 years in prison for being a felon in the possession of a firearm with three previous convictions for a violent felony. Despite “the district judge expressed misgivings about the fairness of a fifteen-year sentence,” the charge against him does in-fact carry a mandatory 15-year minimum sentence.

When he was 21, Nigg and a partner in crime went on a 1976 crime spree in Arizona when Nigg was 21. He and his partner stuck-up a motel clerk, convenience store and gas station at gunpoint, stealing a total of $670.47, plus cigarettes and a pair of gloves. In 1977 he was sentenced to 15 to 30 years in prison, but eventually released slightly early in 1990.

As reported by Heavy.com’s editor and reporter-at-large Tom Cleary, “Nigg’s family and attorneys say he was ‘set up’ by his stepmother, who wanted to take control of his father’s estate, of which he was the executor.” Nephew Jimmy Nigg added, “My uncle spent 15 years in prison doing hard time for his robbery when he was a young man.”

Not done yet, the young nephew also stated, “He spent 20 years living in Wisconsin before he was arrested and convicted of selling the hunting rifles he inherited from my late grandfather’s estate. Steve Nigg (was) the executor of the estate and his role was to sell the land and property of the estate and divide it among the family.”

Also noted by Cleary, “Nigg was a contributing member of society after his release from prison on armed robbery charges, according to court documents. Before his sentencing on the gun convictions, the judge received several letters describing his role in the community, including how he volunteered as the Easter Bunny and Santa Claus.” 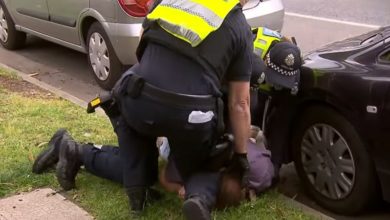 Brutality Down Under: Melbourne Cops Slam Peaceful Anti-Lockdown Protester To The Ground (Video)