News broke that fascists at Twitter blacklisted one of the verified accounts held by Rep. Marjorie Taylor Greene, R-Ga., over the New Year weekend.  The Georgia Republican responded by calling Twitter an “enemy to America.”

“When Maxine Waters can go to the streets and threaten violence on Twitter, Kamala and Ilhan can bail out rioters on Twitter, and Chief spokesman for terrorist IRGC can tweet mourning Soleimani but I get suspended for tweeting VAERS statistics, Twitter is an enemy to America and can’t handle the truth,” she said in a statement responding to the ban. “That’s fine, I’ll show America we don’t need them and it’s time to defeat our enemies.”

MTG responds on Telegram, since she can't tweet. "Twitter is an enemy to America and can’t handle the truth." pic.twitter.com/M8IgCU4KFa

Prior to the ban, Breitbart said, “she had over 465,000 followers on Twitter, meaning the Republican party and conservative movement has lost one of its most influential accounts on the platform.”

It’s not known what prompted the ban, but the social media outlet that plays a prominent part in what I now call the “Silicon Valley Axis Evil,” said it was over, “repeated violations of our COVID-19 misinformation policy.”

Translation: She engaged in wrongthink and double-plus ungood thoughtcrimes.

Breitbart said she was banned after tweeting statistics from the VAERS database.  Apparently, Twitter now says that amounts to “misinformation”:

The Georgia representative says she was banned for tweeting statistics from the Vaccine Adverse Event Reporting System (VAERS).

MTG was suspended for using a CDC VAERS chart.

So is Twitter now telling us the CDC isn’t credible?

Or that the truth is not allowed to be told? pic.twitter.com/flfLkurLxI

It sure seems that’s the case.

“Her ban from Twitter should come as no surprise. Once Twitter crossed the Rubicon and banned a sitting President there was nothing stopping them from banning each and every Republican from the platform without thinking twice,” Gab founder and CEO Andrew Torba said.

“While everyone is distracted by New Years celebrations Silicon Valley is working overtime on the behalf of the Regime to ramp up censorship ahead of the 2022 election cycle,” he added.

Greene is right.  Twitter, along with Facebook and Google, have become “enemies” to America with their insane censorship of ideas that fall anywhere to the right of Josef Stalin.

Rep. Lauren Boebert said Republicans will hold big tech responsible when they take the House in 2022.

They’ve now permanently suspended a sitting member of US Congress.

Of course, both from the same party.

They forget that in 2022 we are taking back the House and we WILL be holding them accountable!

Personally, I’ll believe that when I see it happen.  Perhaps it’s time freedom-loving Americans give these big tech fascists the middle finger and move to alternative sites like Gab, Gettr, Parler and others. 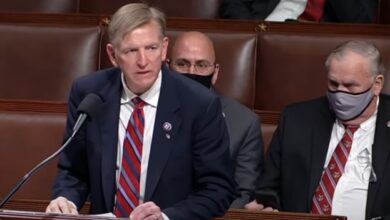