And so the clouds of Benghazi gather yet again over the White House as e-mails have surfaced showing that Barack HUSSEIN Obama…this most traitorous of men…contacted YouTube about the infamous ‘Innocence of Muslims’ video while the attacks at Benghazi were ongoing. This is serious stuff folks as it shows that while Obama did NOT send troops to help our people under attack at the mission…saying there was NOT enough time to save them (and how did he know the time frame while the attack was ongoing unless he helped plan it)…but he did have time to call YouTube and lay the foundation for the LIE that the attack was caused by said video.

And these e-mails unequivocally prove that the video accusations did NOT come from the CIA as Obama and his minions claimed…as they came BEFORE the CIA even began comprising their own talking points on what they believed happened that night. This basically means that the cover-up story was concocted by Obama and his people BEFORE the attacks occurred, thus ignoring a phone call that was made from Benghazi while that attack was ongoing that linked the attack to an al-Qaeda group.

So while the main e-mail still remains classified…and I’m sure that even when released certain words (possibly) tying Obama into the attack will be redacted…one line from it has been ‘leaked’ out. Sent to the Diplomatic Security Command Center at 9:11pm EST on September 11, 2012, hours BEFORE the attack was over, the subject line of the e-mail reads: “Update on Response to actions – Libya.” Now please tell me how can you have an update on response to actions when NO response to actions on our part ever took place nor before a suspension of violence occurred…you simply cannot…that is unless the events of that fateful night were known to you in advance of them unfolding.

And what do those circling the wagons around Obama say about these e-mails… “We actually think this proves what we’ve (Obama) said. We were concerned about the video, given all the protests in region,” according to an administration official who wanted to remain anonymous (of course he would as NOT taking responsibility for one’s own words is a hallmark of this administration).

But Darrell Issa, the chairman of the House Oversight and Government Reform Committee currently investigating Benghazi…as do those of us really searching for the truth…believes differently and rightly so. Contending the e-mails directly contradict the Obama White House’s assertion that it was the CIA who first blamed the attack on protests in response to the video, Issa said, “The e-mail shows the White House had hurried to settle on a false narrative – one at odds with the conclusions reached by those on the ground – before Americans were even out of harm’s way or the intelligence community had made an impartial examination of available evidence.” 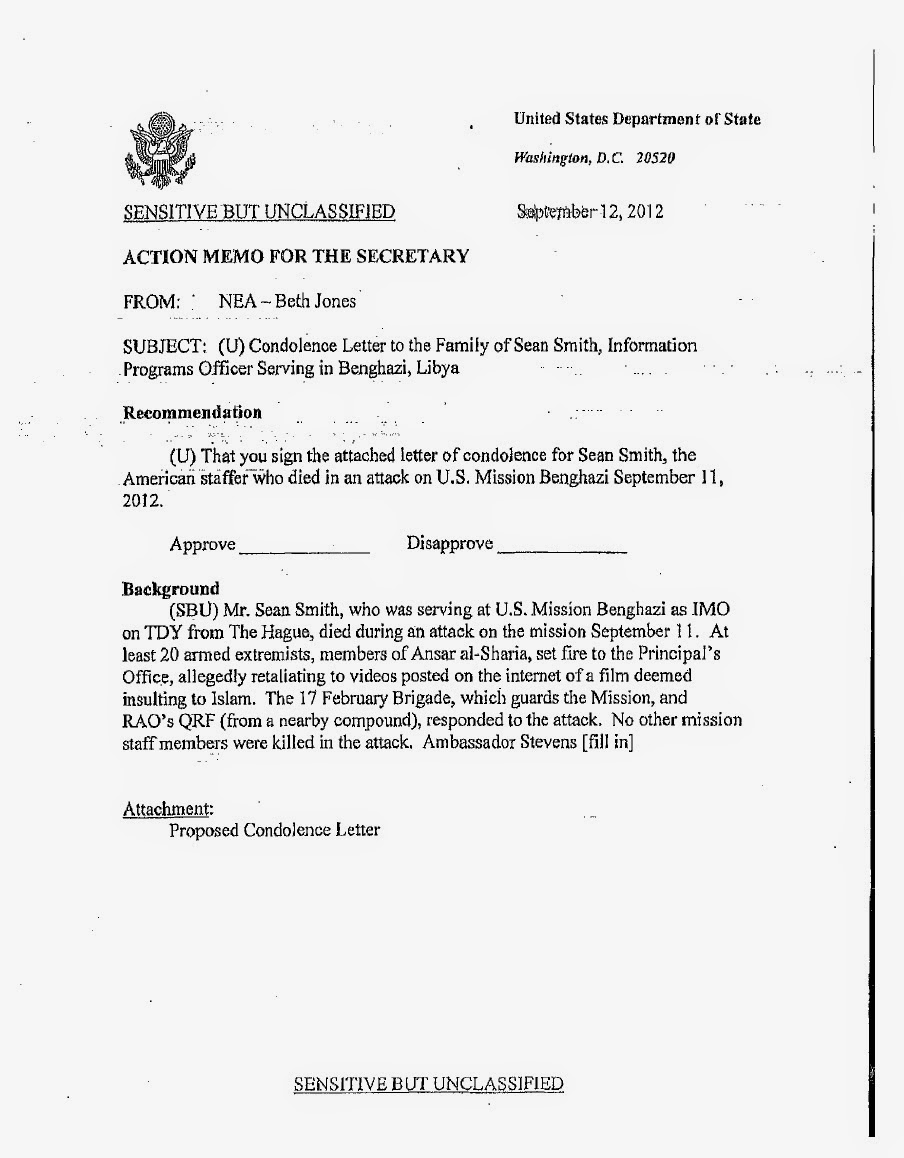 And to make this even more grievous, a memo from the State Department…Hillary ‘What Does It Matter’ Clinton’s State Department…a memo in regards to a condolence letter sent to Sean Smith’s family dated September 12th, refers to both the video and to a group linked to al-Qaeda as the cause of the attack. In trying to cover their bases…in trying to cover their LIE by throwing in words about a possible terrorist link to the attack into the mix on paper only, as the video alone was made the cause of the attack in the weeks that followed…this administration again blew it as NO ground investigation by our side had been conducted at that point in time to point a definitive finger anywhere. Remember, it took weeks for the FBI to investigate…so how could a letter of this sort been sent…and yet it was. 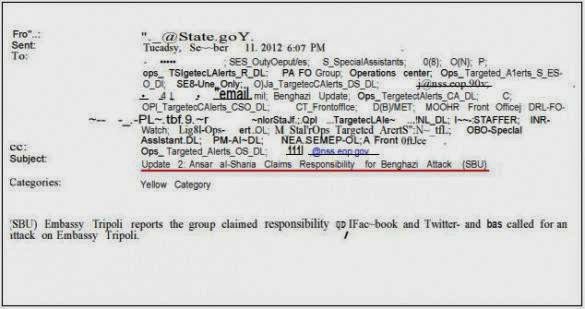 “At least 20 armed extremists, members of Ansar al-Sharia, set fire to the Principal’s office, allegedly retaliating for videos posted on the internet of a film deemed insulting to Islam,” the memo reads. And while an Ansar al-Sharia (a tentacle of al-Qaeda) connection was proven true (as per a released e-mail coming three hours after they took credit for the attack and BEFORE this condolence memo was sent), the attack had NOTHING to do with retaliation for the controversial video as NO protests about this video or any video were going on anywhere within the area of Benghazi, and everything to do (I believe) with covering up Obama’s gun and weapons running operation to the al-Qaeda backed Syrian rebels and the targeted silencing of Ambassador Stevens who was going to expose Obama’s unlawful operation.

And as Obama and crew continue stalling on declassifying the e-mails, certain facts remain that are indisputable… Ambassador Stevens begged for help in the months leading up to that fateful night and all pleas went either unanswered or were dismissed as unfounded…Hillary had enemy combatants guarding the mission instead of our troops doing so…the time frame for the attacks seemed to have been known by the administration as NO help was sent when the attacks were in progress and NO one could have known how long the attacks would last yet apparently someone (as in Obama) did…the White House held a ‘prep call’ after the attacks with then-U.N. Ambassador Susan Rice in which the video was ‘decided upon’ to be the cause of the attacks she was to use when she made the rounds of the Sunday morning talk show…and most importantly NO, I repeat NO, YouTube video or protests against said video was involved in these attacks.

These are facts, simple indisputable facts, and connecting the attacks to the video almost from the outset…if NOT having it ready to be used even before the attacks…the bottom line remains that Barack HUSSEIN Obama has now been caught NOT just lying about the events of September 11, 2012, but also knowingly and willingly lying about who the perpetrators were. But now with these e-mails…if everything has NOT already been redacted that is…Obama (and Hillary) might actually be tied into the planning and cover-up of the whole sorted affair as well.

So if those in Congress would just follow NOT only the e-mail paper trail but the timeline of events as well and put two and two together like my good friend and CPR-RIGHT SIDE PATRIOTS partner Craig Andresen and I did in our 3-part Benghazi expose*…only then will the truth finally be exposed.

But I’m sad to say that NO one in this sitting Congress appears really willing to do this as even the new House Select committee led by Trey Gowdy has had the Democrats circling the wagons around Obama, and doing so by allowing Nancy Pelosi to pick the worst possible people…including the mouth that roared Elijah J. Cummings…to sit on the committee. And anyway, the fear of repercussions of impeaching and then arresting America’s ‘supposed’ first black president seems to trump doing the right thing…trumps getting to the truth about the murders of Ambassador Christopher Stevens, Information Officer Sean Smith, and ex-Navy SEALS Tyrone Woods and Glen Doherty. 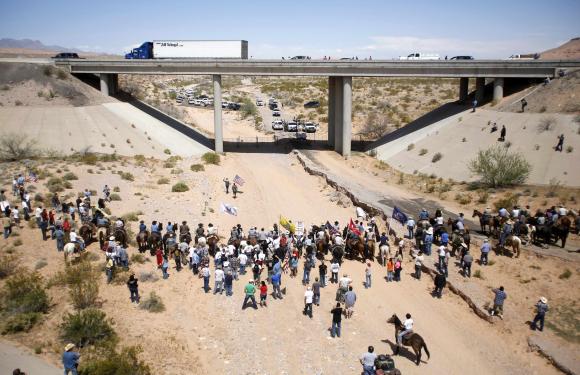 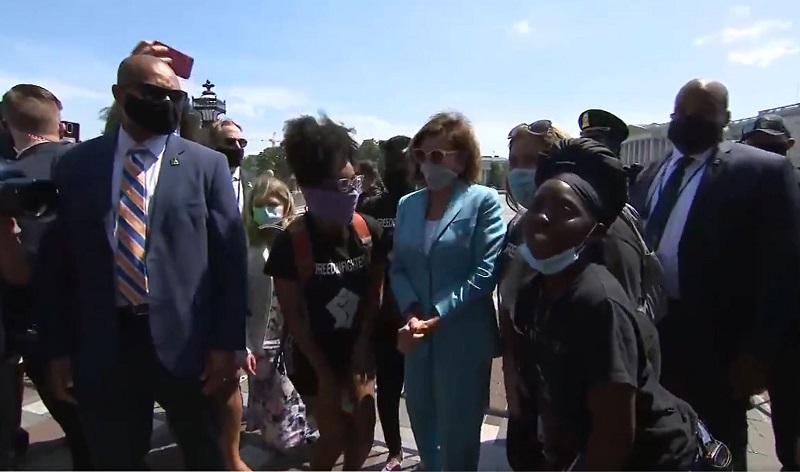 Pop Quiz: If Nancy Pelosi Thought D.C. Protests Were ‘Peaceful’ Why Did She Need So Many Security Guards? (Video)