A Pennsylvania Drag Queen/Social Worker has been charged with 25 counts of felony class 2 child pornography and 18 counts of criminal use of a communications facility.

Brice Patric Ryschon Williams, 26, of Chambersburg, Pennsylvania, was charged with 25 counts of felony class 2 child pornography and 18 counts of criminal use of a communications faacility after a two-year investigation. Williams had allegedly uploaded and shared at least 135 videos and pictures of child pornography and is in custody at the Franklin County Prison. His bail was set at $100,000 which he was unable to post.

Williams performs as a Drag Queen using the name Anastasia Diamond and has recently been working with LGBTQ+ youth.

Williams is also a licensed social worker with a Master’s Degree in social work.

The intrepid Libs of TikTok account posted the news on Thursday.

BREAKING: A Pennsylvania drag queen was just arrested and charged with possession of child pornography. pic.twitter.com/WGO4ca35zg

Newstalk 103.7 broke the news on Thursday.

The investigation into child pornography uploaded to the Dropbox web platform started in May of 2020 when the National Center for Missing and Exploited Children submitted a tip to the Pennsylvania Office of Attorney General’s Child Predator Section. That tip from the 18th of May reported that 76 sexually explicit child pornography files were uploaded to Dropbox around May 2, 2020. The email address associated with the account was listed belonging to Anastasia Diamond, or Ana D. Inspection of the files determined that at least 49 of the 76 files appear to depict children under the age of 18 performing sexual acts. After a preliminary search of the IP address of the uploaded determined their ISP to be Comcast, a subpoena was issued to the ISP.

That subpoena determined that the suspect’s login IP address was at a home on Oxford Court in Chambersburg, PA as well as the subscriber’s name. Emails of the subscribers were also listed, including one that presumably belonged to Brice Williams.

Subsequent subpoenas on the Ana D email address to Google regarding their Gmail account yielded IP addresses and recovery emails.

The investigation continued and on June 22, Special Agent Travis Nye obtained a warrant to search the home of Brice Williams. The warrant was executed at 6:43am on June 23.

In an “update” to their article, it includes just how involved Wiliams was in the community.

Brice Williams is also a board member of the Franklin County Coalition for Progress, serves on the Pride Franklin County Committee, and the United Way of Chambersburg’s Diversity, Inclusion, and Equity Committee. He has been a prominent advocate for LGBTQ rights especially in Chambersburg, championing the LGBTQ Non-discrimination ordinance push in 2021, given a FAB Rising Star Award 2020 by the the LGBT Center of Central PA, is or was recently an HIV medical case manager at Keystone Health Center in Chambersburg, and currently works for GLO Harrisburg, a center that offers a “safe space” for LGBTQ+ youth of color. Williams is also a licensed social worker with a Masters Degree in Social Work from Shippensburg University. 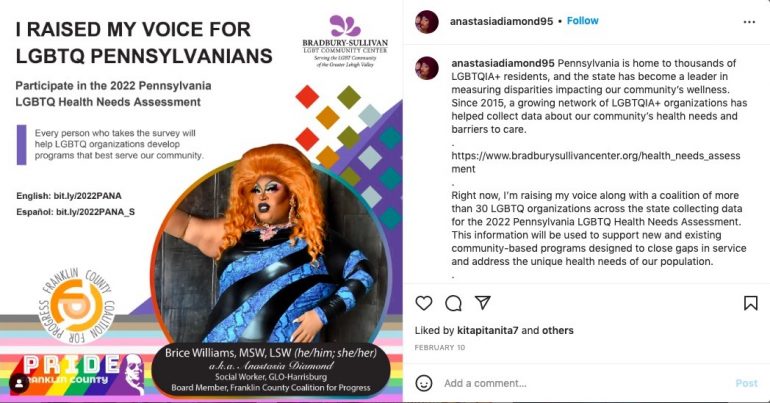 Brice Williams, aka Anastasia Diamond – a drag queen who recently has been working with youth- is charged with 25 counts of child pornography. pic.twitter.com/eub1DrhYp8

Here’s a video of Brice Williams, the drag queen who was charged with 25 counts of child pornography, performing for children. pic.twitter.com/sbJQjs7VDs

Williams adamantly denied that he had sought out or shared any images of child pornography.

But it’s difficult to argue when there is evidence.

That he admitted that only he uses.

After finding the defendant’s phone, authorities were able to find at least 25 videos of child pornography on the phone, as well as more on an old phone. Special Agent Nye notes that 25 is just a small sample of the number of sexually explicit files on Williams’ phone.

After finding his devices, SA Nye confronted Brice with more information. Williams then admitted that he had searched for, possessed, and shared child pornography. He then told police that he first saw child pornography in 2014 on a messaging app and that he eventually started uploading the files to cloud storage apps to send and receive more files and links with other people online.
Source: Newstalk 103.7

And yet… it’s not all that surprising, is it?

No matter how often the “tolerant Left” insist that there should be a Drag Queen in every classroom, let’s not forget that Drag is a highly sexualized performance that is meant for adults not children.

It is essentially a gay burlesque show with some comedy that is quite often sexual in nature. That’s kind of the joke, isn’t it? That these men are a caricature of women?

As these “kid friendly” Drag events continue to gain popularity in our current garbage culture, we see just how inappropriate these events actually are.

One Drag Queen a few years ago made it clear that this type of entertainment is not for children and spoke plainly about why.

Drag queen speaks out against events with children

“I have no idea why you would want [drag queens] to influence a child” pic.twitter.com/rz2mce7mpd

Adults are going to seek out adult entertainment. Introducing it to children is what so many parents are objecting to and that’s why they’re calling it “grooming.”

But concerned parents aren’t the only ones calling it “grooming”…

That’s what this is all about… who is it that gets to influence the values of your child, you or Drag Queens?