The mainstream media had a problem with reporting Donald Trump at the Great Faith Ministries church in Detroit on Saturday – a predominantly Black church. Oh wait, he’s supposed to be the big “racist” – his visit to their church stands as testament to their narrative being completely wrong.

According to a report at Col Allen West’s website, Trump received a standing ovation…as well as Bishop Jackson blessing him with a prayer shawl, the moment at which the news media cut off the live feed. Guess the Bishop was a little too friendly to The Donald.

Note: Donald Trump treated the people with gentleness, with respect, and did not usurp the positions of the leaders. Significantly different than the way Hillary treats people as peons.

We will have Trump’s speech from Detroit church up in a minute. Funny how the MSM cut the feed the moment Bishop was blessing him.

The mainstream media does NOT want you to know that Trump is not a racist. They don’t want to show ANYTHING positive about him. They are so freaked out that their sugar-daddy train from Democrats will lose, that they will do anything to stop Donald Trump.

He truly did receive a standing ovation at the church after his 14 minute speech. Newt Gingrich stated that if he continues this path, he may receive “more Black votes than any Republican  in modern times.”

Some of his speech included this as reported by the Washington Examiner:

“I fully understand that the African-American community has suffered from discrimination,” the Republican presidential nominee told his audience. “And that there are many wrongs that must still be made right. They will be made right.”

Trump also said it is his goal to make Detroit the “economic envy of the world.”

Later, he said it is his hope that America turns its face to God.

“Now in these hard times for our country, let us turn again to our Christian heritage to lift up the soul of our nation,” Trump said. “I am so deeply grateful to be here today. And it is my prayer that America of tomorrow, and I mean that, that the America of tomorrow will be one of unity, togetherness and peace — and perhaps we can add the word prosperity.”

Trump concluded his speech with a Scripture from 1 John 4: “No one has ever seen God but if we love one another, God lives in us and his love is made complete in us.”

The Mainstream media wants to divide us so they’ll have more negative things to report and make more money.

Video—Trump speaks at black church in Detroit: “A lot of people don’t realize that Abraham Lincoln…was a Republican” https://t.co/gkbf70u8hB

Shot lots of video of dancing Trump at church in Detroit, will share some later. Crowd enthusiastic. pic.twitter.com/urJHj6N5mP

Donald Trump is presented with a prayer shawl at Great Faith Ministries International in Detroit. pic.twitter.com/wOZryhNA6o

@RSBNetwork Even funnier was to hear @CNNnewsroom bash Trump and his effort to unite us. So, who’s the great divider now? MSM 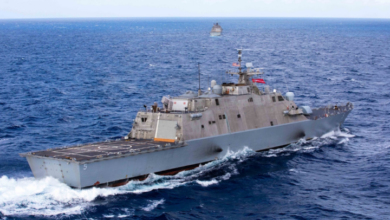