How insane is the Borg-like collective known as the modern American left?  On Tuesday, Breitbart reported that “Shakespeare in the Park” launched its summer season in New York’s Central Park with a contemporary performance of William Shakespeare’s “Julius Caesar” in which the title character bore a remarkable resemblance to President Trump.

Speaking to Mediaite, Laura Shaeffer — a sales manager at Salem Media who saw a performance of the play over the weekend — said the character of Julius Caesar in the Public Theater adaptation wears a business suit and has his hair styled in a manner similar to Trump’s, Breitbart said.

Sheaffer added that the character of Calpurnia, Caesar’s wife, speaks with a “Slavic accent” similar to that of First Lady Melania Trump.

As happens at the end of the original play, the (Trump-inspired) Caesar is brutally stabbed to death by his associates in the Senate. Sheaffer said Caesar’s death scene was particularly graphic, with blood “spewing everywhere,” and an American flag hanging overhead.

“To be honest I thought it was shocking and distasteful,” Shaeffer told Mediaite. “If this had happened to any other president — even as recently as Barack Obama or George W. Bush — it would not have flown. People would have been horrified.”

The Trump connection in the Oskar Eustis-directed production was not intended to be subtle, though the president is reportedly never referred to by name during the show.

Take a look at @PublicTheaterNY's first Shakespeare in the Park production of 2017, a Trump-inspired Julius Caesar https://t.co/iTPiJMSSaq pic.twitter.com/t5VfDfZVRe

According to Playbill, The Public Theater’s Oskar Eustis directed the Trump-inspired take on the classic political drama, which boasts famed stage actor John Douglas Thompson and House of Cards star Corey Stoll in its cast.

The choice of Julius Caesar for the annual program is one dripping with subtext, chosen deliberately for the supposed parallels between the Roman dictator and Trump. A description of the play on The Public Theater’s website states that “Shakespeare’s political masterpiece has never felt more contemporary.”

It describes the Roman leader as “Magnetic, populist, irreverent,” and “bent on absolute power.” The description also notes that a “small band of patriots, devoted to the country’s democratic traditions, must decide how to oppose him.”

“I always go to Shakespeare in the park, but I wasn’t expecting to see this,” Sheaffer said.

She also said that in the scene, the actor playing Caesar steps out of a bathtub stark naked, which she said struck her as disrespectful, and a “mockery of the office of the President,” Mediaite said, continuing:

In the next scene the Trumpian Caesar is attacked by the Senators and stabbed to death as an American flag hovers overhead, according to Sheaffer. “They had the full murder scene onstage, and blood was spewing everywhere out of his body.”

“To be honest I thought it was shocking and distasteful,” Sheaffer continued. “If this had happened to any other president — even as recently as Barack Obama or George W. Bush — it would not have flown. People would have been horrified.”

“I mean it was the on-stage murder of the president of the United States,” she said.

“Kathy Griffin got so much coverage for what she did, everyone was horrified, so why is no one horrified by this, which is essentially the murder of the President of the United States in front of 2,000 people?” Sheaffer asked.

Good question.  The reason is simple — liberals, driven to a state of insane rage and hate by the anti-Trump media, have no issue with the idea of murdering Trump as we’ve reported time and again since the November election.  One could easily say that Trump’s murder is exactly what the media-driven left wants.

Worse yet, they’ll use any tool to make it acceptable to the public — up to and including murdering a facsimile of the president in a public performance. 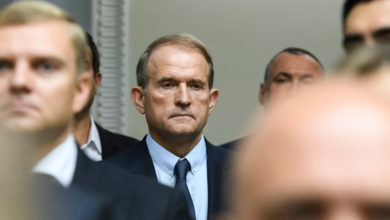