It is believed by many that Barack Obama abused his authority in declaring many National Monuments and Parks, during his presidency, using authority granted to the president by Congress under the Antiquities Act of 1906. Republicans and the Trump Administration are wanting to revoke or revise some of the proclamations, perhaps by President Trump signing an executive order to do it. But the president is not allow to unilaterally take this action by executive order alone. Not the current president, Donald Trump, or any sitting president. The law makes quite clear what the president can do in this area.

The Antiquities Act (16 U.S.C. 431-433) was the first United States law to provide general protection for any general kind of cultural or natural resource. It established the first national historic preservation policy for the United States, allowing the president to set aside for protection “…historic landmarks, historic and prehistoric structures, and other objects of historic or scientific interest that are situated upon the lands owned or controlled by the Government of the United States…” These protected areas were designated as national monuments, such as National Parks.

Presidents have designated national monuments or parks before Congress enacted the Antiquities Act. Section 2 of that law allows the president to make such designations by executive order, but not to remove such designations authorized by previous presidents. That action much be first taken by legislation in Congress, in the form of legislatively revoking the designation.

In the 111 years the Antiquities Act has been in effect, no president has ever revoked a national monument declared by a previous president. In 1938, the U.S. Attorney General found that the president lacks authority under the Antiquities Act to revoke such designations issued by previous presidents. The issue is definitely one of separation of powers under the Constitution, as a president revocation would without authorization from Congress would violate Congress’s authority to enact laws, as it has done in passing the Antiquities Act. It is clear that both revoking and amending or revising such a proclamation, declared by a previous president, is outside of the authority of a sitting president. Redrawing the lines of a national monument proclamation is functional equivalent of revoking it, and is therefore beyond the president’s Constitutional authority.

“Finally, interpreting the Antiquities Act according to its plain language to prohibit presidential revocations of national monument designations of predecessors raises no separation of powers concerns The prohibition does not interfere with the executive branch responsibility to take care that the laws be faithfully executed or otherwise,” Constitutional scholar Bruce Fein writes in an op-ed for the Washington Times, “Indeed, it does not interfere with any executive branch function whatsoever. And only “where the WHOLE power of one department is exercised by the same hands which possess the WHOLE power of another department” is a separation of powers issue raised, as James Madison elaborated in Federalist 47.”

President Trump is entirely within his authority to request that Congress amend the Antiquities Act to accomplish his goals of scaling back many of the national monument proclamations that President Obama has signed. But this must be done Constitutionally and in accordance with the separation of power requirements, by having Congress and not the president act in this way.

While the president and many Republicans strongly believe that President Obama abused the Antiquities Act, or acted in a way that it did not intend the president to do, it is clear that President Trump should not further this by seeking to overturn them by executive order alone. Obama’s excessive use of this authority must be correct by Congress, not the president acting alone. This will uphold not only the separation of power under our Constitution, but it will also be clearly in the public interest to do it this way.

Ciccariello-Maher Says That “Violent Racists” Are Now Smearing Him 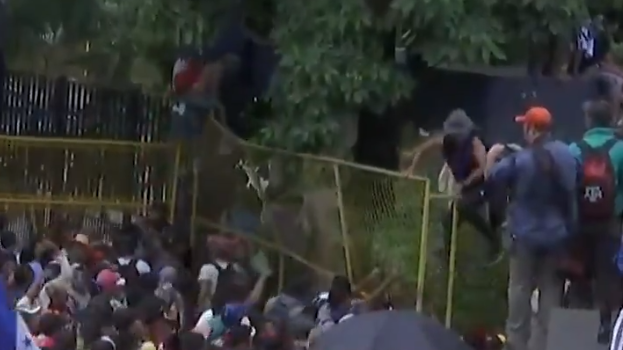