It didn’t take very long for the so-called “mainstream media” to link President Trump to the horrific New Zealand shooting.

Citing a 74-page manifesto, CBS reporter Nikki Battiste stated: “The manifesto makes several references to the United States. In one portion, the author responds to a self-directed question about whether he supports President Trump. He writes, ‘As a symbol of renewed white identity and common purpose, sure. As a policy maker and leader, dear God, no.’”

Keep in mind that a search of the document revealed only the one mention of Trump.

Here’s a screenshot of the relevant portion of the document: 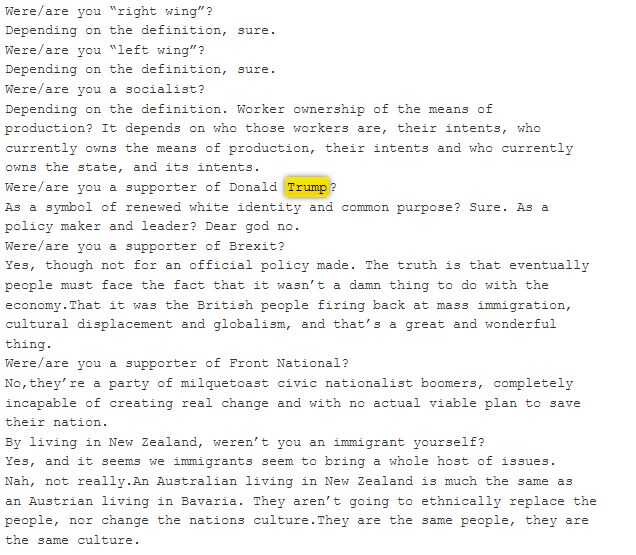 CBS wasn’t the only outlet to make the link.

Both ABC’s Good Morning America and NBC’s Today covered the shooting without drawing connections to Trump. However, on MSNBC’s Morning Joe, contributor Donny Deutsch speculated that Trump’s statement might be weak because Muslims were the victims of this attack.

Newsmax also reported another attempt by CNN to link Trump to the shooter:

“Any time somebody of faith is targeted for any reason, it’s disgusting,” the Illinois Republican told CNN’s “New Day.” “When I say thoughts and prayers are with these folks, I mean it. We need the God of the universe to step in and change people’s hearts.”

However, when show anchor John Berman asked Kinzinger about the manifesto, Kinzinger said nobody can put the deaths on Trump, who quickly put out a message condemning the shootings.

“I don’t know what a sick man that would kill 49 people innocently was thinking,” said Kinzinger. “I don’t have any idea what was in his mind. I know this. It cannot be connected…this is an evil man that made a decision to murder 49 people. And that is on him. Frankly, the evil in his heart.”

The UK Daily Mail also tried to make the link:

It’s quite a stretch to claim the shooter is a Trump supporter.  Any attempt to do so is clearly propaganda and fake news.  But that’s exactly what’s happening.  And it’s not limited to alleged “news” outlets.

Our own Dave Workman informs us that Sen. Richard Blumenthal, an anti-gun Democrat from Connecticut, also tried to link Trump’s rhetoric to the shooting.

No doubt this will be the talking point of the day as anti-Trump media outlets bend over backwards to ensure the shooter’s objectives of further dividing the country over the Second Amendment are met.