On December 13, DeKalb, Georgia Officer Edgar Isidro Flores was fatally wounded. He graduated from the police academy last year. After pulling over the suspect, the gunman, identified as Brandon Taylor, 33, ran from the traffic stop and killed the young officer. A K-9 was deployed and tracked him to behind a business, but the gunman opened fire on the dog, striking him in the head. Three SWAT officers returned fire and the gunman was killed.

The DeKalb police officer shot earlier today has died. We are forever grateful for his service and sacrifice. Our prayers are with those who mourn. https://t.co/5kCPsxDici

The DeKalb County police department was devastated. Not only did they lose one of their own, but one of their K-9 officers, Indi, was critically wounded. Indi was a 5 year veteran of the force, and knew the job inside and out.

Indi was rushed to the Blue Pearl Veterinary Hospital to undergo surgery. The care at the hospital saved the dog’s life, though he lost an eye from the bullet.

“DeKalb Police K-9 Indi has been receiving the most compassionate and professional care anyone could hope from the staff at the Blue Pearl Veterinary Hospital. Indi’s recovery following his surgery progressed extremely well and the expert staff at the hospital felt confident enough in his recovery that it was determined he could be released to go home with his handler just before noon on December 15, 2018. When he exited the hospital to go home with his handler, Police Officer Norman Larsen, they were met by a line of police cars and officers and K9 handlers from the cities of Sandy Springs, Atlanta, Doraville, Brookhaven, East Point and Roswell as well as Cobb County. Officers came to pay their respect to Indi and his handler and wish them a speedy recovery and we as an agency can’t begin to find the words to thank them for their professionalism and support. Indi will continue his recovery at home with the major concern being protecting his wounds from infection. The bigger concern will be keeping Indi from being the very active police canine he seems ready to get back to being until he fully heals. Indi’s return to service will ultimately be his decision. The main concern of the DeKalb Police Department is that Indi recover fully from his injuries. Once the staff at Blue Pearl give him the okay, Indi will be evaluated to see if a return to police work is safe enough for him to do and in everyone’s best interest. Indi has certainly earned his retirement and if police work is no longer an option he will be retired to his handler, so he may live out the remainder of his life as a family member in their home. Please help us express our sincere gratitude to the wonderful staff at the Blue Pearl Animal Hospital. The amazing compassion and unmatched care he received following his injuries are the single reason Indi went home today.” 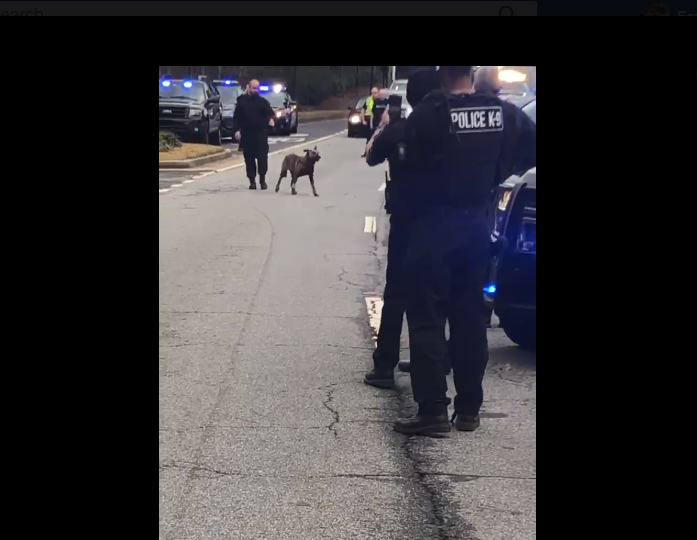 K9 OFFICER INDI RELEASED????????Heartwarming to watch as dozens line the streets to see @DeKalbCountyPD K9 Officer Indi leave the hospital today after being shot in the head. The dog is expected to be okay. pic.twitter.com/g92wD6xt77

The DeKalb County Police department lost a valued member of their department in the death of Officer Flores. But the fact that Indi is recovering is a bright spot for them at a difficult time. We wish them well.