An op-ed published Saturday at the reliably liberal Daily Beast says that in order to make the Internet “great” again, President Trump must SMASH Facebook, the social media giant once dubbed the “world’s most dangerous censor” along with other Silicon Valley tech “oligarchs.”

Of course, leaning left, the op-ed took a swipe at Trump, calling him “the authoritarian blusterer in the White House,” while claiming that Americans are looking on him “with horror.”  Leftists and Never-Trumpers of course look at Trump that way, but a very large percentage of the country doesn’t.

After taking his obligatory swipe at the chief executive, Joel Kotkin said Americans “are slowly succumbing to a more pernicious, less obvious and far more lasting tech oligarchy gaining ever more control over our economy, culture and politics.”

“We are certainly looking at” bringing antitrust cases against Amazon, Facebook and Google,” Trump said in an interview just before the election, adding that he’s had “so many people” warning him about their overwhelming power.

Unreliable narrator though the President may be, people are indeed waking up to the tech giants’ massive and largely unchecked power, and the consequences of turning over our channels of communication to them. That includes World Wide Web inventor Tim Berners-Lee, who said earlier this year that he “was devastated” by how the internet has been used in recent elections, including our presidential race, and that he’s working to create a new system now that “the web had failed instead of served humanity, as it was supposed to have done, and failed in many places.”

We once saw the tech industry as a refreshing alternative to the staid old corporate establishment, a entrepreneurial environment where all kinds of thoughts and images would have free rein. Yet as the industry has evolved, it has become one of the most concentrated and monopolistic America has ever seen, determined to stamp out prospective rivals and expand control of both media and politics.

Setting aside his swipes at Trump, Kotkin is exactly right, as Silicon Valley tech giants like Facebook now have a death grip on what speech Americans are being allowed to engage in online.

Worse yet is the impact Facebook has had on the recent midterm elections.

As we and others reported, Facebook engaged in a Kristallnacht-style purge of over 800 pages and accounts, many of which were political in nature.  Prior to that, Facebook has throttled traffic to conservative sites by up to 80 percent, or worse in some cases.  Meanwhile, it has helped more liberal outlets like CNN.

According to a post at the Gateway Pundit, Facebook has wiped out some 1.5 billion views of conservative sites since 2017.

Facebook has wiped out conservative publishers. Americans will no longer see articles from conservative websites even if you follow them. Facebook took advertising dollars from all of these businesses and then changed their business plan after the 2016 election.

Facebook wants to pretend this was not a political decision. Yet, several top liberal activist groups: Media Matters, Share Blue, CREW and American Bridge, made it a priority in early 2017 to work with the liberal tech giants to undermine President Trump and ensure that liberals gain control of Congress and the presidency in 2020.

And the result:  Democrats have eked out a slim majority in the House of Representatives, giving victories to open socialists and anti-Semites.

On Saturday, Lori Saxon, owner of the Facebook group “The Deplorables,” tells me the site dubbed “Iron FistBook” by political cartoonist A.F. Branco disabled her group over claims that it doesn’t follow community standards.  The group is now under review: 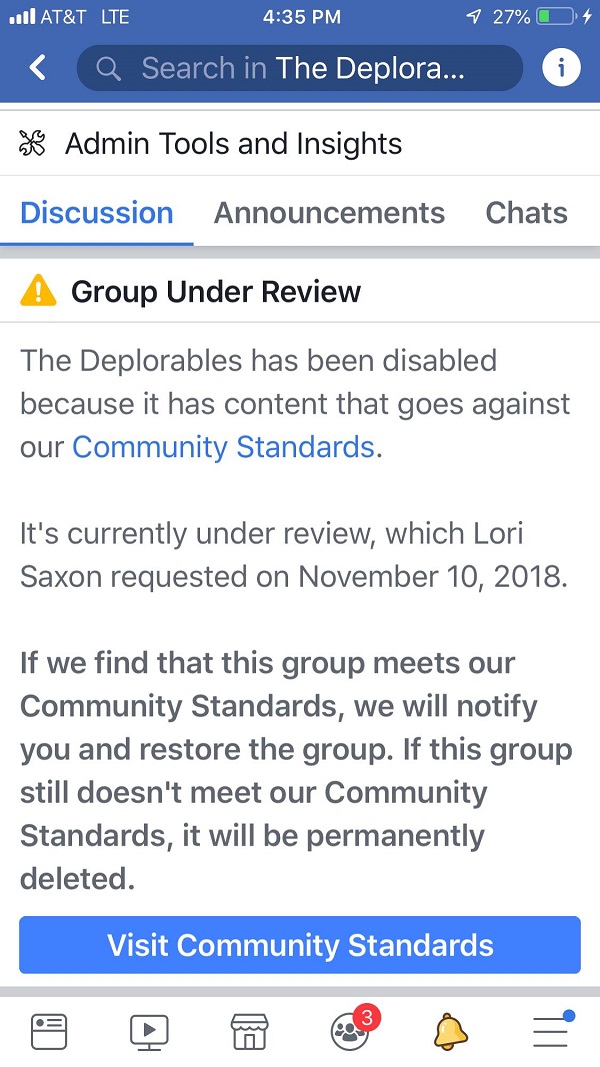 A number of alternatives have sprung up, as we noted here, but none of them have anywhere near the reach or power that Facebook and Twitter have — yet.  There is also an effort at the state level to make censorship not so profitable for companies like Facebook.

There are other grassroots efforts taking place even now, like this GoFundMe page dedicated to fighting Facebook censorship, and this campaign by Brian Kolfage, a triple amputee combat veteran whose business was decimated by Facebook because of his politics.

A poll set up by Kolfage shows that a large number believe Facebook actively targeted conservatives for censorship in the recent election.

This isn’t the future we’ve hoped for. I won’t bet on it but here, at least, is a chance for Trump to smash some of the right idols for a change. Maybe this is one case progressives, moderates, and conservatives alike could find that rarest of thing: common ground.

Bingo.  It’s time for all those who love free speech to come together and stop Silicon Valley tech giants.  As I opined here, they are already a direct threat to our freedom and form of democracy. They’ll only get worse in the next two years if left unchecked.