The mainstream media is reporting that Senate Republicans are starting to drift apart and some of the most liberal members like Susan Collins and Lisa Murkowski are signaling that if given the opportunity they will vote to end the shutdown even without funding for a barrier.  What they aren’t reporting is that there are also cracks developing in the House Democratic caucus. House Democrats elected in the recent midterms who had promised to fix Washington are beginning to fear the heat from their constituents about the shutdown

Rep. Jahana Hayes, a new Democratic representative from Connecticut, called on her colleagues in Congress to work on a compromise to end the partial shutdown, which has left hundreds of thousands of federal employees working without pay.

“The government shutdown is a sobering reality of where we are right now. We have to get to work. We cannot keep operating in hard lines,” Hayes said on “Face the Nation” Sunday during a panel with three of her new House Democratic colleagues. “We cannot keep saying nobody’s willing to move. We have to move. That’s why we were elected. That’s what we were sent here to do.”

Hayes is not alone. According to Politico, “Freshman House Democrats are ready to shut down the shutdown.”

Now, as the shutdown drags into Day 19, the frustration is starting to reach a tipping point for some who fear the prolonged stalemate could do real political damage in vulnerable Democratic districts.

“If I am getting comments and contact from my constituents expressing concern that the Democrats are not prioritizing security, then I think we can do better,” said freshman Rep. Abigail Spanberger (D-Va.).

Spanberger, who represents a district won by President Donald Trump in 2016, spoke up at a closed-door caucus meeting Wednesday morning to warn Democrats were losing the messaging war in her district and needed to be more clear about the kind of border security measures they support.

The Democrats remain solidly behind Nancy Pelosi, but that unity is beginning to exhibit cracks. They are feeling the heat from their constituents not only on the issue of securing the border but also because of Pelosi’s strategy of refusing to negotiate.  The Democratic Freshman had an emergency meeting in Virginia over the weekend “because several new members were ‘freaking out’ about the ongoing shutdown and the party’s strategy, according to a Democratic source who requested anonymity to speak candidly.”

I would Imagine that the freakout got worse after the Pelosi/Schumer “response” to the President’s speech. After all, she looked kind of scary. 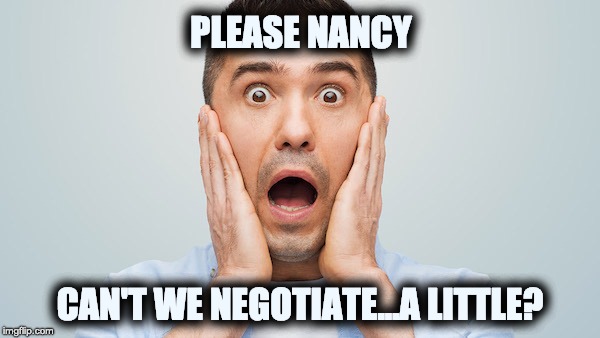 Although they might object to the barrier, some believe it should be used to gain acceptance of other Democratic Party desires including Congressmen who aren’t a freshman. Bill Foster, for example, is starting his fourth term:

Rep. Bill Foster (D-Ill.) stood up in the closed-door meeting Wednesday to urge fellow Democrats to consider trading some amount of wall funding for legal protections for the thousands of immigrants brought the country as children who stand to be deported.

“I think it’s something that should be in the discussion here because things are obviously going so slowly,” Foster said. “I think this is ground that most Democrats should feel comfortable standing on.”

The Illinois Democrat said he’s talked to Dreamers in his own district who have told him to “hold my nose and vote” for a deal.

The point is there are cracks on both sides, but the MSM is generally only talking about the GOP. Of course, this will moot points if President Trump uses declares a national emergency which is in his powers and shifts money from other departments to build a barrier on the US Mexican border.