Throughout the first half of 2021, there was a tremendous amount of optimism about the U.S. economy.  Many believed that the pandemic would soon be behind us and that a new era of great prosperity would soon be upon us.  But now the optimism that we witnessed is fading as Americans become increasingly concerned about inflation, shortages and rising debt levels.  Our leaders created, borrowed and spent trillions upon trillions of dollars in a desperate attempt to get our economy back on track, and it turns out that all of that money didn’t really have the enormous impact that they had hoped.  On the other hand, inflation is now beginning to spiral out of control, and many are comparing this time in our history to the Jimmy Carter era of the 1970s.

As you will see, it appears that a tremendous amount of long-term damage has been done.

Many economists are telling us that it will probably take a number of years for employment to return to pre-pandemic levels, but that also assumes that we will not be facing another major economic downturn in the near future.

Needless to say, I do not share that rosy assessment.

The number of Americans that are considered to be “not in the labor force” has also not returned to pre-pandemic levels.

Just before the pandemic, 95 million Americans were considered to be “not in the labor force”, but now that number is up to more than 100 million.

We are being told that unemployment is “low” in this country even though more than 100 million people do not have jobs right now.

But according to John Williams of shadowstats.com, if honest numbers were being used the unemployment rate would currently be above 25 percent.

The good news is that at least we are not at 35 percent like we were during the peak of the pandemic.

Our politicians realized that things were really, really bad in 2020, and so they started spending money at a rate that we have never seen before.

This is complete and utter insanity, but at least our politicians have been more restrained than the Federal Reserve has been.

“Economic malpractice” is way too soft a term to describe what the Fed has been doing.

If the American people truly understood the Fed and what it has been doing to our currency, there would be wild protests in the streets tomorrow morning.

Collectively, our politicians and the Federal Reserve have pushed the size of our money supply to dizzying heights.  Just before the pandemic, M2 was sitting at about 15 trillion dollars, and now it has crossed the 20 trillion dollar threshold.

Anyone that believed that we could do this without causing rip-roaring inflation was just being delusional.

Just look at what has been happening to home prices.  They have been rising at the fastest pace ever recorded, and families all over America are feeling the pain.

A few days ago, I published an article in which I explained that home prices are 23 percent higher than they were at this time one year ago…

The median price for an existing home in June hit an all-time high of $363,300, up 23% over last year. That marks 112 straight months of year-over-year gains.

Needless to say, the vast majority of Americans have not had their paychecks increase by 23 percent over the past year.

The gap between the ultra-wealthy and the rest of us just keeps getting bigger and bigger, and the middle class is shrinking a little bit more with each passing month.

These days, we also have widespread shortages to deal with.  Prior to the pandemic, I don’t remember ever hearing about any major shortages, but now they are all around us.

In particular, the chip shortage has been incredibly painful for a lot of Americans, and the CEO of Intel is now telling us that it could last into 2023…

One of the leading voices in the semiconductor industry sees the chip-supply problems stretching as far as 2023.

It could take one or two years to get back to a reasonable supply-and-demand balance in the semiconductor industry, Intel CEO Pat Gelsinger said in an interview with The Wall Street Journal after the company posted second-quarter earnings on Thursday. “We have a long way to go yet,” he said. “It just takes a long time to build [manufacturing] capacity.”

At first, a lot of Americans believed our leaders when they were told that wonderful days were just around the corner.

But now reality is starting to set in.

Faith in “the recovery” is fading, and at this point more than half of all Americans believe that the economy is in poor shape…

Fewer than half of Americans, 45 percent, judge the economy to be in good shape, while 54 percent say it’s in poor shape, according to a new poll from The Associated Press-NORC Center for Public Affairs Research. Views are similar to what they were in AP-NORC polls in June and in March, despite increases in vaccinations and the flow of aid from Biden’s $1.9 trillion coronavirus relief package.

If most Americans are dissatisfied with the economy today, how will they be feeling if economic conditions are even worse six months from now?

In my opinion, we should be very thankful that economic conditions have been relatively stable in recent months, because the long-term outlook for our economy is not good at all.

Our leaders are literally in the process of committing national financial suicide, and the whole world will be affected since we produce the reserve currency that the entire planet depends upon.

So enjoy these relatively good times while you still can, because eventually they will be gone for good. 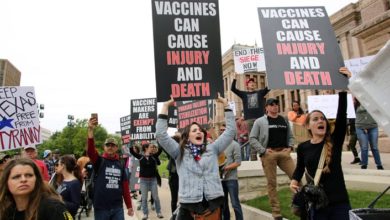