Comey: “I was actually going out of town with my wife to hide”

The long awaited testimony of ex-FBI Director James Comey has finally come to pass. Now that this particular waste of taxpayers dollars is said and done, there are only two things that leaves little doubt in anyone’s mind;

Everything else that happened in DC today was just as much theater and drama as the line from the film Becket that Comey shared with Sen. Angus King.

Despite the consistent testimony from Comey that President Trump never colluded with Russia nor did he ever attempt to obstruct justice, the Democrats are still clinging to the accusation that Trump “lied”.

But in fact, the only time Comey ever manned-up an actually cited a solid “lie” uttered by Trump is the following as reported by the New York Daily News;

“And although the law required no reason at all to fire an FBI director, the administration then chose to defame me and more importantly the FBI by saying that the organization was in disarray, that it was poorly led, that the workforce had lost confidence in its leader. Those were lies, plain and simple. And I am so sorry that the FBI workforce had to hear them, and I’m so sorry that the American people were told them.”

Here’s the kicker… the “lie” President Trump leveled is only a lie in the mind of James Comey.

If the fired FBI director didn’t like what Trump said about him and the FBI, those opinions would be those of Comey and him alone. His opinions certainly don’t rate to be uncategorically described as lies.

In all fairness, there was a moment during the testimony where the embattled ex-director stated he decided to pen memos of his meetings with the president because he thought the president “might lie”.

I must say that as far as the Democrat charge that President Trump obstructed justice, why would Trump ask the FBI director to illegally end an investigation when the President of the United States has the authority to pardon any given citizen IF an illegal act had been committed?

That is nothing more than Democrats proving that even a drowning man will clutch as a sword.

And as far as Comey trying to play the part of the sage soothsayer warning of Russian baddies by stating;

“It is not a Republican thing or a democratic thing. It really is an American thing. They’re going to come for whatever party they choose to try and work on behalf of, and they’re not devoted to either, in my experience. They’re just about their own advantage. They will be back.”

Gee, no kidding. What was your first clue, Jim? 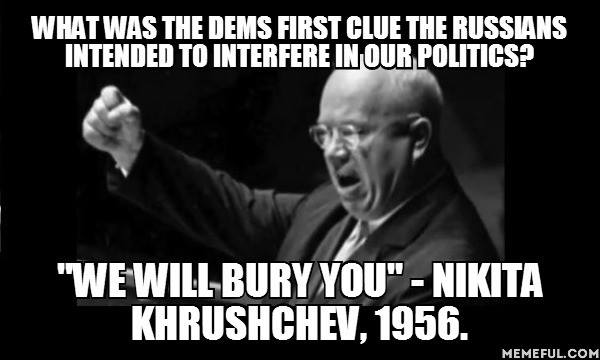