On Thursday, CNN propagandist April Ryan got verbally shut down by White House Press Secretary Sarah Huckabee Sanders after she claimed Sanders was “blindsided.”  Ryan later went ballistic on Twitter with fighting words and continued her histrionics during an interview with fellow propagandist Don Lemon.

Here’s a transcript of the exchange as provided by the White House:

Q So, Sarah, at this point, can you tell us definitively if the President plans to answer any questions from Bob Mueller? And if not, what is now in place here at the White House to go through that process of a subpoena, a possible indictment, a possible grand jury?

MS. SANDERS: Again, those are all questions you would need to refer to the outside counsel.

Q Okay. Well, now, going to Rudy Giuliani — did Rudy Giuliani do harm to the President today and last night in his conversations to Fox?

MS. SANDERS: I don’t believe so.

MS. SANDERS: Sorry, I’m going to take Lalit’s question like I promised to do.

Q Why didn’t he talk to the White House Press Office about his impacting stellar statements about what was happening? Everyone (inaudible).

Q But you were blindsided — you said yourself, I was blindsided by what he said.

MS. SANDERS: I actually didn’t use that term.

Q Well, I said it. (Laughter.) But you were blindsided, from what you said.

MS. SANDERS: Well, with all due respect, you actually don’t know much about me in terms of what I feel and what I don’t.

Q (Inaudible) been here for 21 years, so I understand how this operates. Do not discredit me.

Here’s video as posted by the Washington Examiner:

Sanders after reporter says she was "blindsided" by hush money reimbursement news: "With all due respect, you don't know much about me in terms of what I feel and what I don't" pic.twitter.com/6kHv4KYj75

This didn’t sit too well with Ryan, who spent the day going on about fist fights.

During an exchange with former Baltimore Mayor Stephanie Rawlings-Blake, Ryan engaged in what the Daily Caller said were “fighting words.”

Rawlings-Blake: “@AprilDRyan unsolicited comeback suggestions for @PressSec, “I may not know you, but I damn sure know a LIE! And you are wearing it Sis, all over your face -oh wait is that a smudge in your liner”

Ryan: “Lol stop. Bmore in the house I know you have my back. That you don’t know me stuff begins fist fights. She needs to know what she is saying. I am not the one”

Rawlings-Blake: “I already took my earrings off and Vaseline in my purse”

Ryan: “That is what I am talking about! Take off that pretty ring to fornthe street fight Lol” 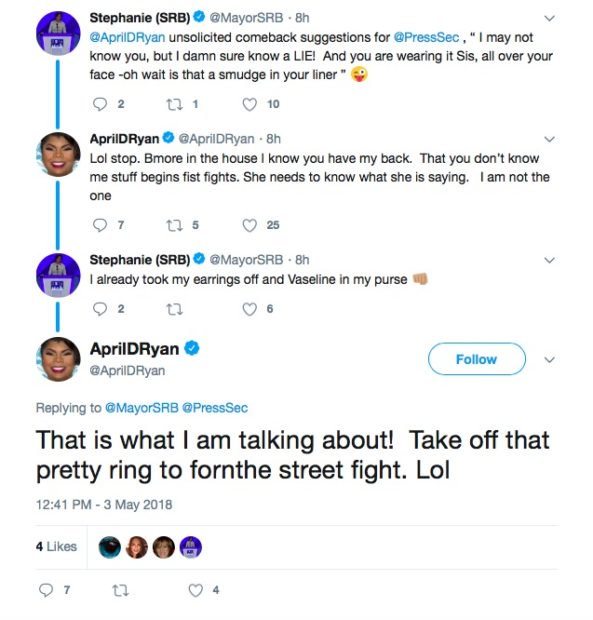 The Daily Caller also said Ryan went over the top during the interview with Lemon:

“If she’s upset about [my question] then that’s fine, I understand people in the White House are very upset,” Ryan said. “But what I will say to you is that…for her to say, ‘you don’t know me,’ in certain quarters in this nation that starts a physical fight.”

“I was very shocked, it was street. I will even go beyond that — it was gutter,” Ryan continued. “She can be mad at what I say right now: tough.”

Ryan also attacked Sanders’ relatively young age, stating, “You know, I feel like she’s feeling some type of way, she’s catching feelings from this weekend…she’s 35, I’m 50, I’ve been at the White House for 21 years to her what — one?”

"To say 'you don't know me' — in certain quarters in this nation that starts a physical fight."

I'm sorry, did she just imply that Sarah Sanders wanted to fight her? https://t.co/M82RhHiDRy pic.twitter.com/mk7bIizzZI

Why else bring up people fighting each other over "you don't know me" unless she was trying to paint Sanders as violent?

It actually sounds to us like Ryan is trying to instigate physical violence with Sanders over this exchange.

Maybe the Secret Service should get involved.