Don Lemon talking theology is like PETA talking BBQ tips. He can give you all the relevant words without any meaningful grasp of the actual content.

When the Pope released the Vatican’s official doctrinal position on same-sex marriage, Don Lemon was ready and willing to find a way to take offense.

You’d think the man’s open contempt for faith would be reason enough for him to keep his opinions to himself, especially since he has nothing critical to say of, for example, ISLAM’s position on same-sex relationships, which is (when last we checked) significantly more severe than a simple denunciation of the act as sinful.

Also, a man who made headlines for (allegedly) sticking his fingers in his shorts and making someone working in the bar he’d been drinking at sniff them while making sexually inappropriate explicit comments might want to sit out a conversation on what is or is not appropriate human interaction.

"God is not about hindering people or even judging people." pic.twitter.com/j2PTumaZXv

If his on-air persona is any indication, Don Lemon has never entered a room in which he did not believe himself to be the moral superior of anyone else present.

He was given a softball question by someone from the View asking how he, as a gay dude with a fiance felt about the Pope’s statement on same-sex marriage, which we covered in a previous story: Pope Gives ‘Offensive’ Ruling About Same-Sex Marriage — Here’s The 411

Not surprisingly, he used it to frame himself as the moral superior of the Church itself, and he misused a MLK quote to help him double down on the inference.

He begins with an obligatory disclaimer of the sort that anything coming after the ‘but’ tends to negate.

“Listen, I respect people’s right to believe in whatever they want to believe in, their God, BUT if you believe in something that hurts another person or that does not give someone the same rights or freedoms not necessarily under the constitution because this is under God I think that that’s wrong. And I think that the Catholic Church and many other Churches really need to re-examine themselves and their teachings because that is not what God is about. God is not about hindering people or even judging people and to put it in the context of race, I find that Dr. Martin Luther King Jr. said the most segregated place on Earth, time on Earth was eleven am on a Sunday morning. So I think that religion and the pew keeps us from actually — they’re barriers from actually getting to know each other.

So I would say to the Pope and the Vatican and all Christians or Catholics or whatever, whomever, or whatever religion you believe — you happen to belong to out there, go out and meet people. And try to understand people. And do what the Bible and Jesus actually said, if you believe in Jesus, and that is to love your fellow man, and judge not lest ye be not judged, so instead of having the pew hinder you, having the Church hinder you instead of being segregated in the Church, or among yourselves, go out and have a BBQ and meet people, and start breaking bread with people and getting to know them, much as I do at Joy’s house, mostly Sonny coming to my house, Sara coming to my house, me going to Whoopi’s house, for BBQs and I’m telling the truth, and hopefully I will be celebrating some sort of meal with Meagan and Liberty at her house or at my house.

So many things wrong with this diatribe it’s hard to pick a few.

Only someone with a politicized or childishly immature understanding of ‘freedom’ believes that immoral behavior must be endorsed and celebrated in the name of freedom.

The robust meaning of freedom, in the classical sense, presupposes a moral framework within which genuine freedom operates. An alcoholic, for instance, might have as much to drink as he pleases, without being, in the truest sense ‘free’. The same is true of every moral question including this one.

Don Lemon has merely asserted unilaterally that his sexual mores are morally correct, and the Church’s definitions as morally perverse… the very error he accuses the Church of making in his speech.

And if Lemon argues widespread acceptance of an idea is sufficient proof of its moral virtue, we remind him that segregation was, at one time, the law of the land, and that there are something like 2 billion Muslims who would challenge his assertions, not to mention a great many Chinese, or Hindus, or traditional Christians. Globally, his position is the minority view. It is only Western Secular Privilege that lets him believe otherwise.

Hate to break it to you, but God made it pretty clear what He was about. When He was shlepping this 3rd rock from the sun, he came as the Lamb of God, announcing that the Kingdom of Heaven had come. His message wasn’t just ‘be excellent to each other’. It went deeper than that.

From that time Jesus began to preach, saying, “Repent, for the kingdom of heaven is at hand.

The moral dimension of our lives mattered, not an a-la-carte morality, but one anchored in the character of an unchanging God.

As for Judgment? Jesus had a lot to say about it, as did other prophets and apostles. After all, He will be the one judging the living and the dead. (Acts 10:42-3)

And he commanded us to preach to the people and to testify that he is the one appointed by God to be judge of the living and the dead. To him all the prophets bear witness that everyone who believes in him receives forgiveness of sins through his name.”

If you think the Bible shies away from the topic of judging sin, have a look at the letters he wrote to the Churches, commending what they did right and denouncing what they did wrong (note Pergamum and Thyatira), or at the imagery of the closing chapters of Revelation where He settles scores with the wicked once and for all, including detailing a list of sins characteristic of people destined to ‘the second death’.

This is way off. God is clear that our love and respect for people whether male or female, slave or free, Jew or greek is to be the same. Nowhere does God equate that to the endorsement of actions that He has prohibited as sin.

Do you know what’s even MORE segregated? The insular bubble that Coastal elites live in, from which they throw their darts at the rest of us. Don Lemon doesn’t get to lecture us on love for fellow man and spending time with others when he endlessly disparages half the country as ‘bigots’, and has said that anyone he knows who supports Trump needs to (effectively) ‘repent’ before he can be friends with them again:

“I don’t know if after this I will ever be able to go back and be friends with those people because at a certain point you just say, ‘You’re too far gone,’” he said. “If they’re willing to come back and willing to live in reality, then I will welcome them with open arms.” — NYPOST

He’s walled in with other Biden voting zealots and wonders why he can’t wrap his head around any idea that might conflict with his core assumptions? Part of the problem is that he never has to challenge his own assumptions. 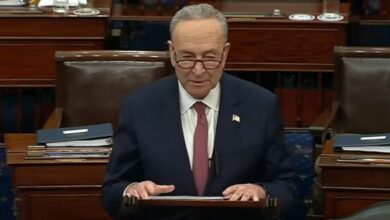