On Sunday, journalist Andy Ngo posted a video to Twitter of a federal officer who was hit in the face by a projectile from rioters in Antifa-controlled Portland.

“Far-left accounts and antifa have been celebrating this video,” he said.

One of those who celebrated the video was Hadiya Afzal, a Muslim Democrat candidate for Illinois’ Dupage County Board (District 4).  Afzal, the Gateway Pundit informs us, was endorsed by Hillary Clinton, the most evil person ever nominated to the White House by a major party.

Afzal thought the video was so entertaining and wonderful that she issued a tweet telling the world that she had the video on repeat and laughing non-stop at the violence.

“[I]ve (sic) been watching this on repeat for fifteen minutes and laughing every single time,” she proudly declared. 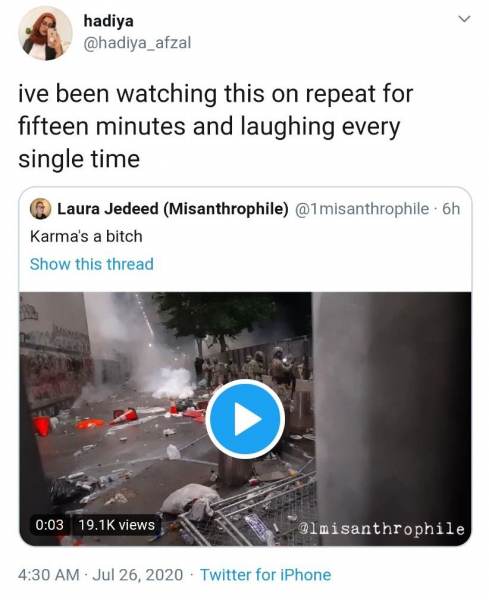 Democrat political candidate in Illinois says she’s been watching the video of the assault of the officer on repeat and laughing non-stop. pic.twitter.com/2bBHgEhG61

Afzal played the victim on Facebook, accusing critics of engaging in a “smear campaign” and taking her comment out of context.  Apparently, quoting her exact words constitutes a “smear.” One person posted a quote attributed to her, and she sure sounds like a modern Democrat:

Another person noted that she was endorsed by Dick Durbin:

Let it be known

(re-tweet if you want to) pic.twitter.com/48zK0f0KJb

This, by the way, is the modern Democrat Party, and it needs to be soundly defeated.

The 10 fights that will take America back from the radical Left
June 17th, 2021 Liberty Unyielding