The hearings for Supreme Court nominee Brett Kavanaugh were set to begin on September 4th in the Senate. And they did open, but all the circus animals started yelling – where’s the ringmaster when you need him? It was literally chaos just to get started. And some claimed it was carefully plotted by Democrats to throw off the hearings. One of the starting acts was watching Linda Sarsour have a tantrum. She was definitely the center ring attraction for the morning. 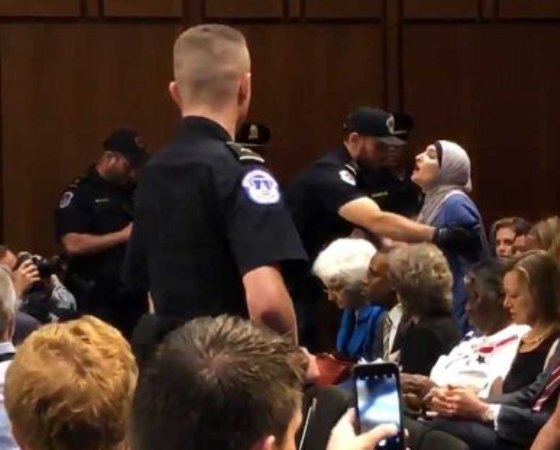 [Memory refresher: Sarsour told a Muslim convention to form “jihad” against Trump back in 2017.]

As of 10:19 this morning, 22 people had been arrested for disorderly conduct (D.C. Code § 22-1321), including Sarsour. You can hear their squawking voices in this video, if you can stand the high-pitched yelling:

Seriously, they sound like a bunch of parrots squawking.  Someone should have sold tickets to this circus. The shouting matches were reportedly planned ahead of the hearings because the Democrats didn’t want the hearings in the first place, and had vowed to stop them.

Plus, they may not have the votes to stop the nomination, which surely makes them snitty about the whole thing. So the answer is redirect, disrupt, destroy.

Ms Muslim leftist aka Women’s March fanatic was led away in cuffs to the slammer along with a few of her cronies. That was worth the price of tickets, right there.

When the hearing was over for the day, and everyone was half deaf from the noise, a father of one of the Parkland students, Fred Guttenberg, supposedly attempted to shake Kavanaugh’s hand. He said he was rebuffed and Kavanaugh “refused.” Which is not what happened.

He was an unknown person who approached a Supreme Court nominee, getting way too close, and security whisked Kavanaugh away before he could shake anyone’s hand.

This is such a gross distortion of reality. Kavanaugh had no idea who Fred was, the hearing has been derailed by crazy protestors all day. Security intervened within seconds and Kavanaugh was rushed away. Framing the interaction as heartlessness is pure emotional manipulation. https://t.co/UcQ6Q2fpto

Leftists will try anything to make Conservatives appear heartless and mean.